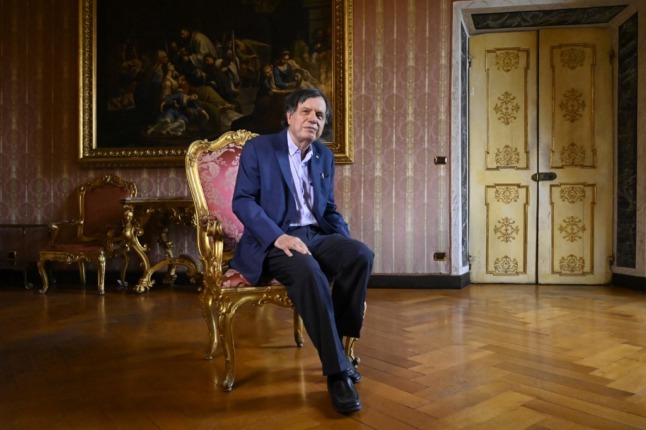 Some 14,000 Italian researchers quit the country between 2009 and 2015, according to Italy’s national statistics agency Istat — a trend explained in large part by a lack of investment.

“Italy is not a welcoming country for researchers, whether Italian or foreign,” Parisi said in October after being awarded the Nobel prize for his work on the interplay of disorder and fluctuations in physical systems.

“Research is underfunded and the situation has worsened over the past 10-15 years.”

Government funding fell from 9.9 billion euros ($11.2 billion) in 2007 to 8.3 billion in 2015 — the latest figures available — while in 2019, research spending in the eurozone’s third-largest economy was significantly below the EU average.

As well as Parisi, Italy has produced some top scientists in recent decades, notably Carlo Rubbia, the CERN physicist who won a Nobel in 1984, and neuroembryologist Rita Levi-Montalcini, who won in 1986.

But commentators note that research budgets were slashed after the 2008 financial crisis, while Italy’s notorious bureaucracy also plays a role in sending young talent abroad.

“In Italy, unfortunately, there are big obstacles to getting a university job,” said Eleonora D’Elia, a 35-year-old biologist from Rome, who has been teaching for the past four years at Imperial College London.

She cited “a lack of funding, and jobs available, the contacts needed and a highly complex system based on the number of articles published”.

Reduction in funds and positions
The scale of the problem was confirmed by Roberto Antonelli, head of the prestigious Lincean Academy in Rome, who told AFP there had been “an enormous reduction in funds for universities and Italian research facilities”.

This was accompanied by “a reduction in the quality of positions available for young people compared to other countries”.

In London, d’Elia told AFP, there is “more support in terms of salary and research budget”, whereas in Italy, where she hopes one day to return to be with her family and friends, she “would have to constantly fight to get that”.

The Italian government has vowed to use some of the massive post-pandemic recovery funds it expects to receive from the European Union between now and 2026 to help boost home-grown research.

‘Like a vegetable garden’
Antonelli welcomed the funds, but warned: “The problem is the continuity of funding… what will happen after 2026?”

He said research must be measured in percentage of GDP, which ranges from “the highest such as in Finland, Japan and South Korea, to the lowest among developed countries such as Italy, which do not invest comparable funds when compared to neighbours such as Germany or France”.

Italy spent just 1.45 percent of gross domestic product (GDP) on research in 2019, below the EU average of 2.19 percent and Germany’s 3.17 percent, according to data from European agency Eurostat.

Parisi has also emphasised the importance of a long-term view.

“Research is like a vegetable garden, if you think you can water it every fortnight, things will go wrong,” he said.

PARTNER CONTENT
How this union supports and serves academics in Sweden 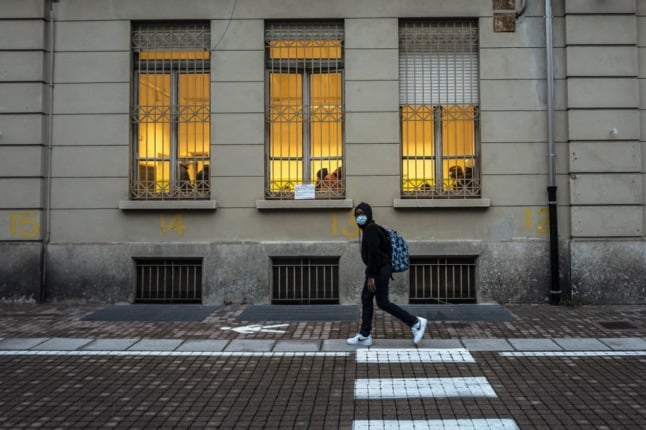 The Italian government is meeting this week to discuss whether Covid-19 vaccinations should become compulsory for school staff, as is already the case for healthcare workers in the country.

Over 51 percent of the Italian population over 12 years old is now fully vaccinated – a threshold which has reignited the debate on achieving complete vaccine coverage of key workers in education ahead of the new academic year.

READ ALSO: How many people in Italy still aren’t vaccinated?

Some 221,000 teachers and other school staff still haven’t received a single dose of an anti-Covid vaccine, amounting to just over 15 percent of the total, according to the government’s latest weekly figures.

It is “absolutely necessary to give priority to teaching in school for the 2021-2022 school year,” stated the Scientific Technical Committee (CTS), which advises the Italian government on health measures.

The committee warned of the potential social and psychological impact on students if they have to face another year of online learning, or ‘DAD’ (Didattica a Distanza).

Vaccinating as many students over 12 is a priority this summer as Italy looks at ways to ensure schools can open – and stay open – in September. But while the country is unlikely to require students to get tested, it is considering making the jab mandatory for education staff as part of a decree set to be announced this week.

The issue has been a hot topic of debate in Italy’s parliament. But though vaccine-sceptic politicians get a lot of coverage in Italian and internatonal media, how representative are their views?

What’s being said in the debate?

Several ministers and party leaders within Italy’s broad coalition government have pushed for all school staff to be vaccinated by September in order to prevent more school closures.

Education Minister Patrizio Bianchi, who’s not attached to any political party, expressed hope that jabs would become compulsory amongst those working in schools.

“We will meet this week with the Council of Ministers on the decision on whether or not teachers should be vaccinated,” he confirmed, as reported by news agency Ansa.

It’s a perspective echoed by the leader of the Democratic Party, Enrico Letta: “Vaccinations are an absolute priority, we invite the government to take stringent initiatives,” reported Ansa.

Political resistance to the scientific recommendations is led by Matteo Salvini, leader of the hard-right populist League party.

“Talking about making 13-14 year-olds and teachers get vaccinated is not part of my way of thinking about a free country,” he said in an interview with newspaper La Repubblica.

READ ALSO: Italy opens Covid vaccinations to everyone aged over 12

He has expressed the opinion that if you’re under 40, getting vaccinated is “not necessary”.

It’s a view that has been slammed by Italian health minister Roberto Speranza, who said: “In the debate on vaccines, ambiguity on the part of any political force is not acceptable,” reported Ansa.

“Our scientists strongly recommend ithe vaccine even under the age of 40,” Speranza stressed.

Another prominent voice is politician Sara Cunial, formerly a member of the populist Five Star Movement (M5S) – a party previously opposed to legislation that made vaccinations against ten diseases compulsory for schoolchildren in Italy

M5S, which was part of a previous coaltiion government at the time, was also the party jointly responsible for making repeated changes to the rules on vaccinating children before starting school – a move criticised by teachers’ representatives at he time as causing “chaos” in schools due to a lack of clarity.

How big is the anti-vaccine movement in Italy?

Il Movimento 3V is a political party that was set up by independent groups and associations in 2019 to support the anti-vaccination campaign, attracting a lot of M5S supporters.

In 2020, it won almost 11,000 votes in the northern region of Emilia Romagna, which was too small a number to win any seats but gives an idea of the scale of distrust of vaccinations in Italy, reports news site Coda.

Protests against vaccinations in Italy tend to be on the small side, such as one organised in Florence by Il Movimento 3V last year at which 5,000 people gathered.

The percentage of the population in Italy with anti-vaccination views is a smaller proportion than in neighbouring France, for example.

In Italy, the number of people who said they “definitely or probably will not” get vaccinated against Covid-19 is around 12 percent, according to a study of seven countries carried out in February 2021.

In France, the level of self-reported vaccine scepticism was more than double that figure (although more than three million people in France have rushed to book their jabs since Macron’s announcement last week). Numbers were similar in Germany. According to research carried out in March this year by the BBC, the number of followers of pages sharing extreme anti-vaccine content in France – which it described as “one of the most vaccine-hesitant nations in the world” – rose in 2020 from 3.2 million to nearly 4.1 million likes.

The UK also has a considerable level of distrust for vaccinations – one in five (21 percent) said they’d refuse a shot, according to a 2020 survey by YouGov. However, only a fraction of those respondents cited ‘anti-vax’ views as the reason for it.

Meanwhile, social media campaigns against vaccines in the Italian language exist on a much smaller scale than in the English language, the Center for Countering Digital Hate (CCDH) reported.

The Facebook page of the press office of ‘Comilva’, an acronym for the ‘Coordination of the Italian Movement for Freedom of Vaccination’, for example, has some 5,000 followers.

Italy also has local politicians who are very vocal about their anti-vaccination views – which in some cases are extreme and attract a lot of media attention.

For example, the deputy mayor of Bistagno in the province of Alessandria, Riccardo Blengio, has been heavily criticised over Facebook posts making comparisons with vaccines and the Auschwitz concentration camp, reports La Repubblica.

Of course, not all those who are sceptical or hesitant about vaccination are voicing such views.

Lawyers representing hundreds of the nation’s healthcare workers, who are taking the government to court over the mandatory vaccination ule for employees in this sector, said they objected on “democratic” grounds

“This isn’t a battle by anti-vaxxers but a democratic battle,” constitutional lawyer Daniele Granara, who helped build up the case, was cited as saying in the Giornale di Brescia newspaper.

“We force people to take a risk under threat of no longer being allowed to exercise their profession,” he added.

Research suggest however that overall, attitudes in Italy and worldwide are moving towards greater willingness to get a jab.

According one study by YouGov in April this year, 57 percent of respondents in Italy were prepared to get a shot, compared with 41 percent back in November.