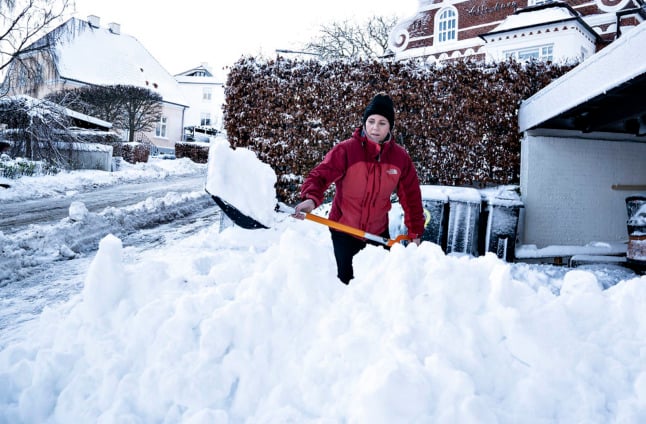 Up to 30 centimetres of snow fell on Wednesday in North Jutland, resulting in flights being ground and public transport grinding to a halt.

Customers and staff at the Aalborg branch of Ikea camped for the night in the store after being snowed in.

Rail traffic across the Great Belt Bridge was meanwhile severely disrupted due to a fallen cable with trains between Odense and Nyborg still not running at the time of writing. They are expected to resume at 8pm Thursday, operator DSB tweeted. Trains were also temporarily suspended between Aarhus and Aalborg.

Snowfall was expected to taper off during Thursday afternoon with most ground snow melting, met agency DMI said according to broadcaster DR.

But more snow or sleet could be on the way on Thursday night, eliciting a risk of icy roads, the agency warned.

North Jutland is again expected to see the coldest weather with temperatures between -8 and -3 degrees Celsius.

The village of Målilla in Småland came close to beating the 38C heat record it set in 1947, logging a temperature of 37.2C.

As the punishing heat seen across the rest of Europe briefly rose up to touch Sweden, several cities beat their own records, with Linköping setting a new record with a 36.9C temperature. The city of Jönköping, with 35.3C, recorded the highest temperature since records began in 1858.

Even the north of Sweden saw the mercury rise above 30C, with Gävle recording a temperature of 33.5C.

Temperatures are forecast to drop significantly on Friday, sinking below 20C across the country on Saturday, with thunder storms expected in many areas.