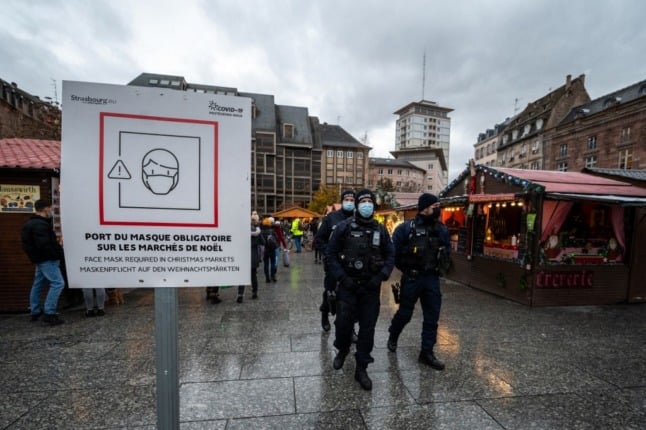 According to the latest figures from Santé Publique France published on Wednesday, close to 50,000 new cases of Covid-19 were discovered in a 24 hour period. The weekly average of new daily cases has jumped 54 percent since last week and now stands at 29,000 new cases per day.

The first confirmed case of the Omicron variant in mainland France was reported on Thursday morning, but there are several more suspected cases.

The emergence of the new variant and the steep rise in cases in recent weeks has left many concerned new restrictions will need to be applied that could effectively ruin the festive period and family get togethers.

But the French government remain confident that tight restrictions or a lockdown will not be imposed at Christmas.

“We can get through Christmas without re-imposing measures,” said spokesperson Gabriel Attal.

Attal did caution that nothing could be excluded but said: “There’s no reason to think that the French will not be able to spend Christmas with their family”.

Earlier the head of France’s Scientific Council, Jean-François Delfraissy, told BFMTV on Thursday that “Christmas is not in danger if we are careful.”

But he says people and companies would need to take action.

READ ALSO Where are the worst hit Covid regions in France?

He said that in order for Christmas to go ahead more or less as normal, businesses should reinstate distance working, people should avoid social meetings and better respect barrier measures, vaccination should continue to expand and organisers of political rallies – of which many are planned this month – should consider requiring the health pass as a condition of participation.

Delfraissy said that while the government and scientists were doing their best to avoid another lockdown, this did remain “a last-ditch, slightly barbaric tool” that could be used if the situation degenerated.

The epidemiologist is head of the Scientific Council, a body that advises the government on Covid-related matters.

Another leading scientist in France also said measures needed to be taken with the vaccine being the best weapon against the virus.

“We have the means to limit the spread of the virus, but it’s now that we need to act in order to have an almost normal Christmas,” said Vincent Enouf, Deputy Director of the National Reference Center for Respiratory Viruses at the Institut Pasteur.

“We have the means to limit the spread of the virus,” said.

The government has already taken a number of measures to alleviate the Covid situation over the winter.

It has expanded the booster shot programme, tightened rules on the health pass, introduced further travel restrictions and strengthened mask wearing rules – including at Christmas markets.

The World Health Organisation have declared Omicron a variant of concern and are worried that it may be resistant to immunity built up through previous infection or vaccination.

But Delfraissy said: “the true fight, the true enemy, is the fifth wave of the Delta variant.”

Last week the Health Minister, Olivier Véran, said that there were no plans to reintroduce a lockdown or curfew in France but did not rule it out as a matter of principle.

Last Christmas saw the strict rules of a second lockdown lifted just in time for people to be able to travel to spend the festive period with friends and family, although many restrictions remained in place and bars, cafés, restaurants and cultural spaces were all closed while large gatherings were banned.

The Loi sanitaire was eventually approved by the Assemblée nationale on Monday after several variations and amendments added on its passage through the Assemblée and the Senate. It was voted on and passed Tuesday, May 26th.

The bill replaces the State of Health Emergency that has been in place since March 2020 and puts in place provision for government actions should the health situation deteriorate or a dangerous new variant of Covid emerge.

The original text had a provision for the return of the health pass at the border, but this has now been scrapped and instead the government has the right to make a negative Covid test a condition of entry for all travellers.

At present negative tests are required only for unvaccinated travellers, and the new test requirement would only be put into force if a dangerous new variant emerges.

The government will be able to implement the testing rule by decree for two months, but a further parliamentary debate would be required to extend it beyond that.

From August 1st the State of Health Emergency will be formally repealed, which means that the government no longer has the power to introduce major limits on personal freedom such as lockdowns or curfews without first having a debate in parliament.

The bill also allows for an extension of data collection required for the SI-DEP epidemic monitoring tools such as the contact tracing app Tous Anti Covid until June 30th, 2023 and Contact Covid until January 31st, 2023.

The most controversial measure in the bill was the reinstatement of healthcare workers who were suspended for being unvaccinated – this actually only involves a couple of hundred people but medical unions and the medical regulator Haut Autorité de Santé (HAS) have both been against it.

The bill was approved on Monday evening with 184 votes to 149, the result of a joint committee that was able to harmonise the versions of the Assembly and the Senate.

The final vote passed the Senate on Tuesday.