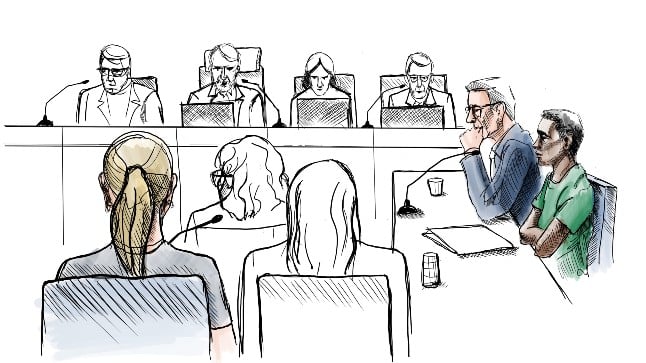 “The court is unanimous. It is important to note that the 17-year-old was not identified by an individual,” said the judge, Göran Lundahl, at a press conference after the sentence was announced. “The sentence is built on circumstantial evidence.”

The prosecutors built their case around security camera footage, and the youth’s DNA, which was found on weapons, clothes, and face mask discovered, together with an electric scooter, 700 metres from the crime scene. The face mask also held large amounts of gunshot residue from the murder weapon.

Andreas Danman, a policeman, was shot while rushing on his police motorcycle to the site of another shooting in the troubled Gothenburg district of Biskopsgården.

As he reached a crossroads, two shots were fired at him from a submachine gun, one of which hit him. He later died of his injuries, in a rare police killing that has shocked Sweden.

Klas Johansson, regional police chief of western Sweden, described Danman at the time as being in his early 30s and relatively new to the profession.

According to Gothenburg court, the shooting was part of a gang conflict, and it was unclear whether the teenager had realised that he was shooting at a policeman.

“It has not been proved beyond reasonable doubt that the 17-year-old knew that Danman was a police officer when he fired the shots,” Lundahl said. “Our conclusion is that he must have mistaken him for someone else.”

In its judgment, the court nonetheless ruled that the 17-year-old had had intent to kill, noting that the teenager had previously been sentenced for the attempted murder of a slightly older teenager, who was also part of this investigation. The older teenager was shot just before Danman, alongside two friends.

“This is an incident carried out in a gang environment and as part of a gang conflict,” Lundahl said.

The 17-year-old denies being involved in the incident, claiming to have been with acquaintances playing games in Frölunda, on the other side of Gothenburg, at the time the murder occurred. He was, however, unable or unwilling to describe these acquaintances other than providing their first names.

CORRECTION: Article edited to clarify a quote by the judge about circumstantial evidence.

In a press release, the party proposed that treating more children in troubled city areas would help prevent gang crime, given that “people with ADHD diagnoses are “significantly over-represented in the country’s jails”.

The idea is that children in so-called “vulnerable areas”, which in Sweden normally have a high majority of first and second-generation generation immigrants, will be given “simpler, voluntary tests”, which would screen for ADHD, with those suspected of having the neuropsychiatric disorder then put forward for proper evaluations to be given by a child psychiatrist.

“The quicker you can put in place measures, the better the outcomes,” says Irene Svenonius, the party’s leader in the municipality, of ADHD treatment, claiming that children in Sweden with an immigrant background were less likely to be medicated for ADHD than other children in Sweden.

At a press conference, the party’s justice spokesman Johan Forsell, said that identifying children with ADHD in this areas would help fight gang crime.

“We need to find these children, and that is going to help prevent crime,” he said.

Lotta Häyrynen, editor of the trade union-backed comment site Nya Mitten, pointed out that the Moderates’s claim to want to help children with neuropsychiatric diagnoses in vulnerable areas would be more credible if they had not closed down seven child and youth psychiatry units.

The Moderate Party MP and debater Hanif Bali complained about the opposition from left-wing commentators and politicians.

“My spontaneous guess would have been that the Left would have thought it was enormously unjust that three times so many immigrant children are not getting a diagnosis or treatment compared to pure-Swedish children,” he said. “Their hate for the Right is stronger than their care for the children.