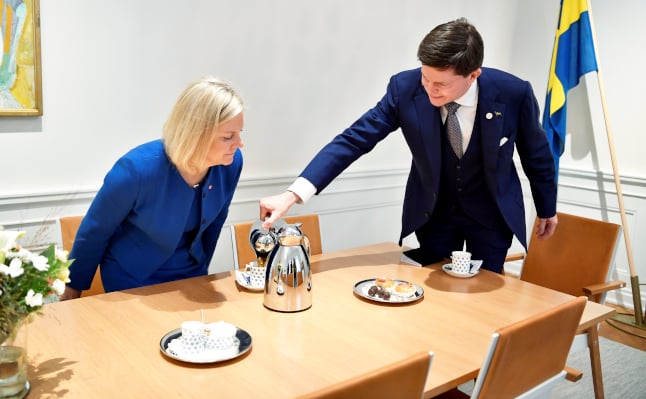 Speaker of parliament Andreas Norlén pours a cup of coffee for Social Democrat leader Magdalena Andersson during a round of talks on Thursday. Photo: Jessica Gow/TT

Löfven handed in his formal resignation to the speaker of parliament, Andreas Norlén, on Wednesday. But that doesn’t mean his successor as leader of the Social Democrat Party, Magdalena Andersson, will automatically become the next prime minister.

Norlén held a series of individual meetings with the party leaders of all the eight parties represented in parliament on Thursday.

This is known as a talmansrunda (talman means speaker of parliament and runda means round or turn), a Swedish word and concept we have become very familiar with in the fragile political balance of the past three years.

After that, he announced that he would give Andersson the first shot at forming a government. She has until 10am on Tuesday next week to report back to Norlén. If she has secured enough support from the other parties in parliament, a prime ministerial vote can be held on November 18th, and if she is successful in that vote her new government can take over on November 22nd.

Andersson will also have the option of asking Norlén on Tuesday for more time.

“I want a fast, but not forced, process,” Norlén told reporters on Thursday afternoon.

Under Sweden’s system of negative parliamentarianism, a prime ministerial candidate needs only to convince a majority of members of parliament not to vote against them in order to take power. But with the slim margins in the Swedish parliament, that is not actually a safe guarantee.

Andersson will need to win the votes or abstentions of both the Centre Party’s 31 MPs and the Left Party’s 28 MPs. Together with the government coalition parties’ 100 Social Democrat MPs and 16 Green Party MPs, this would bring her to the magic majority of 175 mandates (the right-wing parties have 174).

The problem is that there are unresolved obstacles to securing all those mandates.

One of them has been cleared: Löfven was waiting for negotiations with the Centre Party to conclude before formally resigning. That has now happened and the party has confirmed it will let Andersson through.

But the Left Party has made being brought back into negotiations its main demand for supporting Andersson as the new Social Democrat prime minister, so one factor will be the outcome of those talks with Andersson and Left Party leader Nooshi Dadgostar.

Another problem is that the government has not yet secured majority support for its budget proposal, which parliament is set to vote on on November 24th. Neither the Centre Party nor the Left Party has promised to back the government’s budget. But that’s a separate issue, said Norlén – for now the question is only whether or not Andersson can form a government.

In the meantime, Löfven is still in charge of a caretaker government.

POLITICS
The 5 moments and crises that define the Stefan Löfven era
Url copied to clipboard!