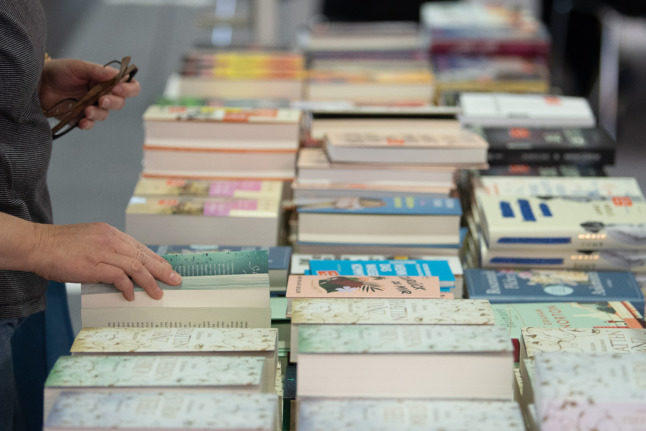 Black author and anti-racism activist Jasmina Kuhnke was the first to pull out at the start of the week, after learning that the Jungeuropa publishing company’s booth would be close to where she was going to unveil her novel “Black Heart”.

The company, which describes itself as “new right” is run by right-wing extremist Philip Stein who has previously called for German-born Kuhnke’s deportation.

Having received threats from the far-right scene in the past, Kuhnke said in a statement she no longer felt safe attending and found it “intolerable” that “Nazis are being given a platform” at the fair.

Her boycott call has since been followed by several other guests lined up for this week’s fair in western Germany, including actress Annabelle Mandeng, choreographer and author Nikeata Thompson and influencer Riccardo Simonetti.

Disability rights activist Raul Krauthausen appeared at the fair on Tuesday but pulled out of later events in solidarity.

“I can and will not promote my book in an environment where black women and women of colour have to cancel their participation because of the right-wing danger,” he said.

In a statement sent to AFP, organisers of the Frankfurt book fair said they “deeply regret the cancellations”.

“We believe they would have sent an important signal with their appearances,” they said.

Frankfurt book fair director Jürgen Boos had earlier said the fair stood for free speech and there were no legal grounds to exclude the contentious publisher.

“We don’t have to like it, but it has to be possible because freedom of expression, freedom to publish are the highest good to us,” he said.

The Jungeuropa publishing company mocked Kuhnke on Twitter, saying it was “absurd” to think “anyone on the right would know her or be interested in her”.

The walkouts had the support of the Anne Frank Educational Institution, which said the fair was contributing to “a further normalisation and spreading of hatred” at a time when Germany was experiencing a rise in “racist and anti-Semitic attacks”.

The presence of far-right publishers at the annual industry gathering has long been a contentious issue.

Protests erupted at the fair in 2017 when Bjoern Hoecke, a leading figure from Germany’s far-right AfD party, visited an event hosted by the Antaios publishing house. Scuffles ensued between left- and right-wing demonstrators and police had to intervene.

The Frankfurt fair, which returned as an in-person event this year after going virtual in 2020 because of the pandemic, ends on Sunday.