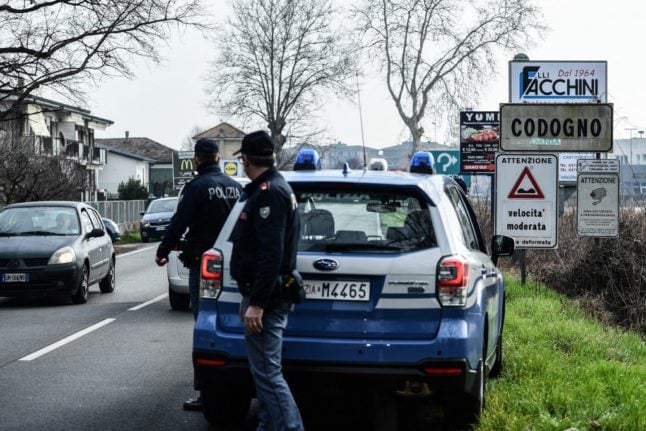 The town of Codogno, Lombardy, was locked down on February 23rd 2020 after becoming the epicentre of the first known Covid outbreak in Italy, and Europe. Photo: Miguel MEDINA/AFP

Watching the first wave of the Covid-19 pandemic hit the UK from Italy was like looking into a parallel universe.

As someone with a dual British and Italian identity, it was also a defining moment for my relationship with the UK.

On March 9th, 2020, Italy’s then-Prime Minister Giuseppe Conte announced the first nationwide lockdown. The message of his historic ‘Io Resto a Casa’ (‘I’m staying home’) speech was clear: public health comes before other interests, as important as they may be.

And we stayed home. The Great Italian Bake-Off had begun.

As the crisis worsened in other countries, Britons living in Italy – and Italians living in Britain – looked at the UK’s response and thought: what are they waiting for?

To our frustration, the recent Commons report on the UK’s handling of the first wave of the pandemic only told those of us with connections to both countries what we already knew. The UK hadn’t learned from Italy’s experience.

Unsurprisingly, the Commons report called the UK’s government decisions on lockdowns and social distancing in the early weeks of the pandemic “one of the most important public health failures the UK has ever experienced”.

It was a delay that cost thousands of lives.

Italy battled the pandemic with little data. But crucially, Italian officials drilled the message, quite literally, home: the situation is serious and there is no time to waste.

SEE ALSO: 19 unforgettable photos from a year of strict Covid lockdowns in Italy

By comparison, the UK’s attitude – despite by then having access to data from China, the WHO and Italy – was staggering.

The Commons report brings the bewilderment we felt at the time into clear focus.

On January 31st 2020, then-Health Minister Matt Hancock was informed by experts that a worst-case scenario would cause 820,000 deaths.

The same week Italy locked down, the numbers in the UK started to align with this worst-case scenario. Despite the alarming data, Britain’s lockdown plan was yet to be formulated.

The same day, famed TV doctor Christian Jessen was forced to issue a public apology after comparing Covid-19 to the flu and accusing Italians of using lockdown as an excuse for a “siesta”.

As the military was called in to help with Bergamo’s overflowing morgues on March 18th, British acquaintances happily announced on social media that they were not closing shop.

Watching the UK’s response to Covid from Italy was like watching a drunk friend get behind the wheel of their car. Unfortunately, there was no snatching the keys out of their hands and calling a taxi.

Sharon Braithwaite, a British-Italian journalist living in London, says that, as people stocked up on pasta and toilet paper, she too asked: ”when will the (UK) government do something concrete?’.

It was frustrating – and at times insulting – for those of us with connections to both countries to hear how the Italian crisis was being narrated in Britain.

A great deal of myths have been used to justify why Italy was so badly affected. Some blamed multi-generational families living under the same roof, while others pointed the finger at the Italian practice of kissing on the cheek. Though multigenerational families are more common in Italy than they are in the UK, the set-up is not so widespread that it could explain the overfilled morgues.

READ ALSO: Eight things the Covid crisis has taught us about Italy

Perhaps most insidious of all were the comments made about Italy’s National Health System.

In one example, Dr Zoe Williams, a family doctor and media personality, reassured the public by saying in an interview on This Morning – a staple of British daytime TV – that ‘[the British] healthcare system is very different to Italy’.

Where the difference lies is unclear: both countries fall under the same universal healthcare model, even though Italy’s is highly decentralised, leaving health care management to individual regions.

Contrary to popular opinion, the Italian health care system is internationally well-regarded and is often ranked as one of the best in the world.

And the pandemic first hit (and overwhelmed) northern Italian regions widely regarded as having the best healthcare in the country.

Seeing Italy’s flagship hospitals in the wealthy region of Lombardy under tremendous strain should have been a further alarm bell.

If Italians have the second-highest life expectancy in Europe (83.1 years, second only to Spain) the healthcare system is to thank.

During the British government’s own enquiry, Professor Dame Sally Davies, former Chief Medical Officer for England, blamed “groupthink” and “British exceptionalism” for the fact British experts did not believe something like SARS could ever get from Asia to the UK.

READ ALSO: What can Italy teach the rest of the world about health?

As Richard Horton, editor of The Lancet, said: the UK “missed an opportunity to prepare during the first months of 2020”.

This had long been apparent to many in Italy. As someone with dual British and Italian identity, the pandemic, paired with the chaos created by Brexit, is transforming my relationship with Britain.

No longer the country of common sense and opportunity, Britain seems like a land consumed by isolationism and exceptionalism – an issue which has now engulfed public health.

The UK now has among the highest infection rates in the world, with 45,000 new cases being reported in a single day. The death toll is rising.

In Italy, for now the health situation remains largely under control. The government and the majority of people remain cautious.

In some ways, nothing has changed.

Do you agree or disagree with the writer of this opinion piece? Please share your own views with us in the comments section below. 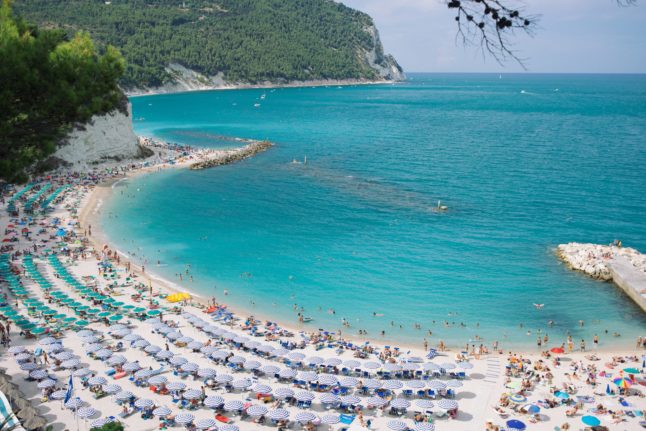 The Tyrrhenian west coast and the Adriatic east one are very different, and each come with their pros and cons.

In my view the Tyrrhenian side of the boot wins, because even though it tends to be more crowded due to the many art cities located along it, its beaches have fewer facilities for families and the shores are more ragged, with rocks and cliffs ideal for solo and adventurous young people.

The Adriatic, on the other hand, is a mass destination for foreign sunbathers, very popular especially among German and Russian tourists. The east coast has Italy’s widest and flattest sandy beaches, which make it an ideal spot for families – but also very crowded.

The Adriatic shore is one long line of adjacent beach facilities that run for kilometres from the northern Friuli-Venezia Giulia region down south to Puglia.

Beaches in the seaside towns of Rimini and Riccione, located along the chaotic Riviera Romagnola renowned also for its wild nightlife, feature up to 50 rows of sun beds and umbrellas in summer. 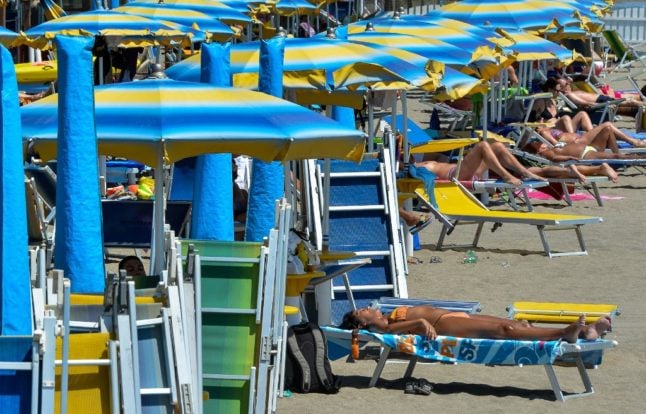 More sunbeds than sand… Some parts of Italy are heavily built-up with an abundance of services. (Photo by ANDREAS SOLARO / AFP)

One good thing, though, is the constant presence of bay watchers and lifeguards at each facility, who are present throughout all eastern coastal regions and very helpful if you don’t constantly want to look after the kids. Beach resorts often come with big seaside multi-floor hotel buildings that look like city offices.

To escape the crowds on the Adriatic coast you need to pick niche, rocky spots with very few beaches such as the Conero Hill in the Marche region and the Gargano promontory in Puglia.

While the Adriatic coast’s wide and easily accessible beaches are great for children and older people, the sea is not always clear and there are just a few top scuba diving and snorkelling spots, such as the beautiful Tremiti islands.

The Tyrrhenian sea, which is deeper than the Adriatic, is packed with diving sites: Ustica island in Sicily and Ventotene isle in Latium are Italy’s top diving meccas brimming with barracudas and giant groupers.

READ ALSO: Where to find even more of Italy’s best beaches

There are also more protected marine reserves along the west coast, which guarantees a pristine environment, and more free beaches without facilities and lifeguards. While this ‘wild’ aspect may be attractive to many, it could make some beaches not suitable for families with small kids. 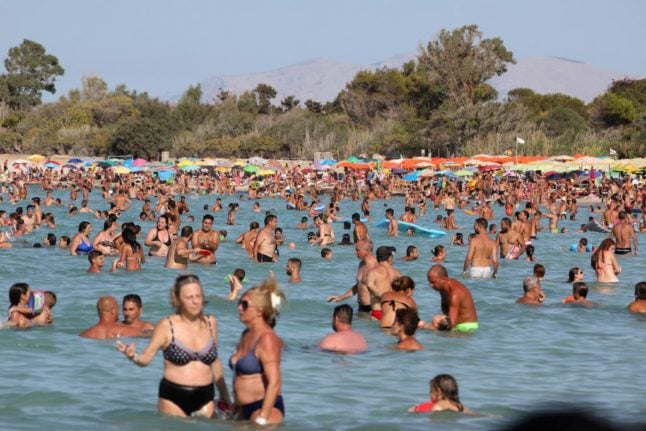 On the other hand, given its relatively shallow waters, the Adriatic is blessed with reasonable stocks of fish, so if you long for fishing expeditions it’s the perfect destination.

However the real plus point of the east coast is its strategic location facing other Mediterranean countries and allowing tourists, particularly from the US, to expand their holidays and exploit Italy as the door to the ‘Old Continent’. From the ports of Bari and Ancona, ferry boats depart to Greece, Slovenia, Croatia and Albania.

The winning asset of the Tyrrhenian, other than its translucent waters and baby powder beaches, is the huge artistic heritage it offers visitors. The west coast boasts the top must-see Italian cities usually picked by global tourists (Rome, Naples, Florence) which all lie, or are close to the sea – except for Venice (the gem of the Adriatic).

The cultural appeal of the west side makes the central national highway, the A1 – otherwise known as Autostrada del Sole – a very trafficky infrastructure.

There are also mesmerising fishermen villages with a mythological vibe along the Tyrrhenian coast, such as Gaeta and Sperlonga, where it is said Odysseus, the legendary Greek king, landed during his wanderings.

Plus, most of Italy’s UNESCO heritage-listed sites are located along or near the west shore. For instance, the archaeological excavations of Pompeii are among the top tourist hotspots in Italy.

Generally speaking, the appeal of popular places along the west coast inevitably translates into more expensive hotels and travelling costs but it depends on the specific location. 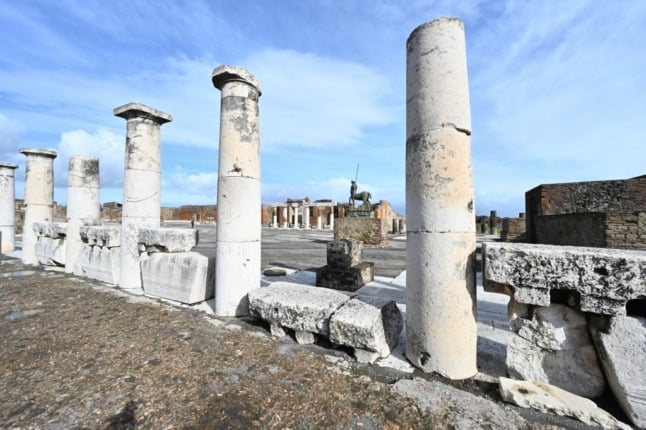 A photo shows a general view of the archaeological site of Pompeii, near Naples. (Photo by Andreas SOLARO / AFP)

The major west coast lure for sea dogs, sailing amateurs and fans of the tan is that nearly all Italian islands are located in the Tyrrhenian sea and reachable from the mainland.

The two island regions of Sardinia and Sicily are accessible by ferry boat from Naples and Civitavecchia, while the Tuscan archipelago, the Pontine islands and Sicily’s dozens of ‘satellites’ such as the Aeolian, Egadi and Pelagie isles are tropical paradises just a stone’s throw from the cultural highlights.

READ ALSO: Ten percent of the world’s best beaches are in Italy

Even though both coasts are stunning and are worth exploring, personally, I’d chose the Tyrrhenian over the Adriatic any day, and not just because I’m a Roman who lives in Rome.

It has a diversified offer of artistic sites and beaches, inlets and cliffs that allow you to savour the most of Italy in just a few days.

The last time I rented my beach home south of Rome to a French couple, I thought they’d laze all day under the sultry sun. Instead they drove across half of Italy in 14 day trips, visiting Florence, Naples, Sorrento and Calabria.