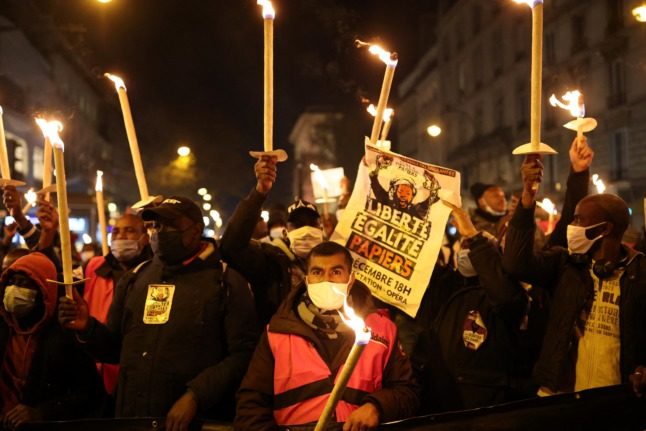 Protesters hold candles and placards during a demonstration for the regularisation of migrants on International Migrants Day in Paris. Photo: THOMAS COEX / AFP.

With France facing presidential elections next year and two far-right candidates currently polling relatively well, immigration looks set to be a crucial issue within the campaign.

But the statistics can be interpreted in very different ways depending on the context, so it’s essential to look at the wider numbers, as well as the consequences of immigration for France as a whole.

The headline figure is that in 2020, 6.8 million immigrants were living in France, representing 10.2 percent of the total population in the country.

This figure comes from French national statistics body Insee and is an estimate, based on census data with additional modelling from demographic trends, and is meant to take into consideration both legal and illegal migration.

France – unusually among European countries – does not require EU migrants to register for residency, so information on the number of residency permits issued does not give the whole story of immigration.

According to Insee’s estimate, 32.2 percent (or 2.2 million) of the 6.8 million immigrant total are Europeans, including both EU and non-EU migrants.

The number also includes 2.5 million people who had acquired French nationality. Indeed, it is important to distinguish between foreigners (those who live in France but do not have French nationality, even if they were born there), and immigrants (those born non-French and outside of France).

France also distinguishes between EU and non-EU immigration in debates. In political discourse, the word étrangers, often translated into English simply as foreigners, in the context of immigration frequently refers to people from outside the EU who do not benefit from EU freedom of movement, even if EU citizens count as étrangers in official statistics.

When ex Brexit negotiator and now French presidential candidate Michel Barnier laid out his political platform of tough controls on immigration, it was seized upon by some in the anglophone world as a sign that he no longer believes in European freedom of movement. But he was talking about étrangers in France – non-EU arrivals who require visas and residency permits – not the right of EU citizens to move between countries (although his platform is controversial for other reasons).

When looking at residency permits - issued to non-EU arrivals - the number issued fell by 20 percent in 2020 as consular services shut down due to the pandemic. However before that there was a steady growth in non-EU migration levels.

However, far-right pundit Eric Zemmour was wrong to claim during a recent debate with Jean-Luc Mélenchon there would be 2 million more migrants at the end of Emmanuel Macron's tenure at the Elysée.

There were therefore 198,000 more migrants living in France in 2017 than the previous year. When you account for deaths, the figure falls to 139,000, and that's before taking into account French-born people who emigrate abroad.

Broadly stable between 1975 and 1999 (+65,000 people on average per year), the difference between migrants entering and leaving France has been rising since the start of the 2000s, Insee reports.

The graph also shows that the migrant crisis of 2015 did not have a significant effect on arrivals France - in 2016 Germany registered 722,000 asylum seekers, in the same year France registered just 75,990.

While those hoping to make it across the English Channel are visible in the media, they form a very small proportion of migrants in France.

There are around 800 to 1,000 people living in makeshift camps in Calais according to French authorities, although charities and academics put the figures higher, at around 1,500 and 2,000 people.

Where do migrants come from?

Of those who migrated to France in 2019, 32 percent were from Europe (both EU and non-EU countries).

But a larger group - 41 percent - were born in Africa, with Morocco the most common departure country, followed by Algeria and Tunisia.

Overall, Algerians are now the largest foreign community in France, accounting for 12.7 percent of immigrants, followed by Moroccans and the Portuguese.

Why do they come?

With EU migration there is less data, since EU arrivals don't need to apply for residence cards that detail their reasons for being in France, but work and study are among the most common reasons.

When looking at non-EU arrivals, most of the 277,406 first-time residence cards issued in 2019 were either for family reasons (including immigrants as well as French citizens who bring over foreign partners), or for students - these each represented 33 percent of residence cards.

Of 1,673,200 foreign nationals in the workforce in 2018, the largest sector - comprising almost 300,000 people - was services such as security and cleaning of professional premises, hairdressing, housekeeping and home help.

This was followed by the construction industry where 247,300 foreign workers were employed.

France in 2020 offered citizenship to immigrants who had worked on the frontline during in the pandemic - in healthcare but also jobs including security, retail, public transport and childcare. In total 16,381 people applied and just over 12,000 were granted citizenship.

The number of asylum requests has also fallen due to the pandemic, but France remained the third destination in Europe for asylum seekers last year, behind Germany and Spain. 19.6 percent of first-time applicants in the EU applied in France, according to Eurostat.

Taking into account the 11 percent of people who were not applying for the first time, 122,015 people requested asylum in Germany, followed by 93,475 in France, ahead of Spain with 88,540. Greece received the fourth largest number of requests (37,900), but this is still more than the 36,041 applicants in the UK.

Almost two thirds of those granted protection had refugee status, while the others were granted subsidiary protection because they would have faced a real risk of suffering serious harm had they returned to their country of origin.

The main countries of origin for refugees last year were Guinea, Syria and China, while those offered subsidiary protection came predominantly from Afghanistan and Syria. The average age of asylum seekers in France is 31.

Official figures rely on data such as the census and applications for residency cards, but there are also undocumented migrants living outside of official structures in France, who are of course harder to count.

Known as sans papiers (without papers) these include failed asylum seekers and people who have overstayed visas or failed to regularise their immigration status within a deadline (which will soon include any Brits who have not applied for the post-Brexit residency card).

Figures on these are necessarily an estimate, but academics put this figure at around 250,000, many of whom are employed in the 'gig economy' delivering food and parcels or in construction.

The accusations against Damien Abad, which he denies, are a major headache for Macron and his new Prime Minister Elisabeth Borne as they seek to keep political momentum after his April presidential poll victory and ahead of June parliamentary elections.

They also come after several politicians running for parliament stepped down in recent weeks over alleged violence against women.

The appointment of Abad as minister for solidarities and people with disabilities in a reshuffle on Friday was seen as a major coup for Macron, as the 42-year-old had defected from the right wing opposition.

But the next day, the Mediapart news site reported a politics watchdog group created by members of France’s MeToo movement had informed prosecutors as well as Macron’s LREM party of rape claims against Abad by two women in 2010 and 2011.

The government’s new spokeswoman Olivia Gregoire on Monday denied that Macron and his government were aware of the allegations when Abad had been appointed.

One of the women told Mediapart that in 2010 she blacked out after accepting a glass of champagne and woke up in her underwear in pain with Abad in a hotel room, and believes she may have been drugged.

She has not filed an official complaint, but prosecutors are looking into the case following a report filed by the Observatory of Sexist and Sexual Violence in Politics.

The report said she informed the police in 2012 but then declined to formally make a complaint, and her subsequent claim in 2017 was later dismissed by prosecutors.

“I’m relieved that it’s come out, because I knocked on quite a few doors so that someone would do something after the case was dismissed, as I thought it was unfair,” Margaux told AFP on Sunday.

“A lot of people knew but some preferred to look away rather than ask more questions,” she added.

Abad said in a statement he contested “in the strongest way” the allegations, arguing his own disability means he is incapable of sexually assaulting anyone.

The newly appointed minister has arthrogryposis, a rare condition that affects the joints, which he says means sexual relations can only occur with the help of a partner.

The allegations overshadowed the new cabinet’s first meeting on Monday, with Gregoire facing a string of questions on the case.

“The government is with those who, following an assault or harassment, have the immense courage to speak out,” Gregoire told reporters.

She added it is up to the judicial system to establish the truth and that, to her knowledge, “no other procedure against Damien Abad is in the works”.

But politicians on the left called for his immediate resignation.

“If I were prime minister, I would tell Damien Abad: ‘I have no particular reason to believe the women are lying… While we wait for a decision from the judicial system, I wish for you not to be part of the government,'” Socialist Party leader Olivier Faure told France Inter radio.

“We need to send a loud enough message to women, that their voices count,” Rousseau told RTL radio.

Borne, herself only appointed last week in the reshuffle, said on Sunday there could be no impunity for harassment and sexual assault.

“If there is new information, if a new complaint is filed, we will draw all the consequences,” Borne said.

In 2020, Macron’s decision to appoint Gérald Darmanin as interior minister – although he was accused of rape, sexual harassment and abuse of power – drew heavy criticism, even sparking demonstrations.

Darmanin, who kept his job in the reshuffle, has denied any wrongdoing and prosecutors in January asked for the case to be dropped.