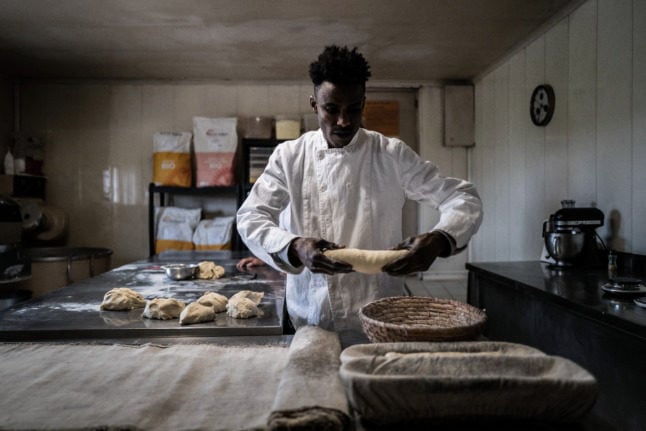 Guinean migrant Mamadou Yaya Bah prepares bread in the bakery where he works in the Ain department. Authorities reversed his order to leave France after his boss Patricia Hyvernet undertook a hunger strike earlier this year. Photo: JEFF PACHOUD / AFP.

Figures from the French national statistics body Insee suggest that around 10 percent of France’s population are immigrants.

But this bare fact hides a huge range of different people – from new arrivals to people who have been here for many decades and have taken French citizenship; from talent visa recipients to refugees; from arrivals from neighbouring Spain or Switzerland to those from the other side of the world.

IN NUMBERS: The real story of immigration in France

With politicians already wheeling out disputed figures and distorted stereotypes, here’s what the experts say about some common immigration tropes.

Immigration is out of control

The below chart shows the net increase in migration to France since 2020 – and shows a gentle increase, but no dramatic spikes.

"When you put the figures into perspective, there have been moments where France was one of the main countries for immigration in Europe, but that hasn't been the case at all since the beginning of the 2000s," said Barbara Joannon, a member of the fact-checking association Désinfox-Migrations.

As the figures show, the large movement of migrants and asylum seekers towards Europe in 2015 did not result in a spike in migration to France.

"2015 was definitely not a turning point for France," said Virginie Guiraudon, a researcher at Sciences Po who specialises in European migration policy. "In comparative terms, France did not welcome many people".

"We're not a place where people arrive like Italy, Greece or Spain, but we are a transit country, so some come to France but are hopeful of getting to the UK, or some people for instance after 2015 and the Syrian crisis came to France because they didn't get asylum in Germany," added Guiraudon.

Immigrants are all economic migrants

Most of the 277,406 first-time residence cards issued in 2019 were either for family reasons (including immigrants as well as French citizens who bring over foreign partners), or for students - these each represented 33 percent of residence cards.

"Economic migration is already relatively limited," Joannon explained, but added that this is "really the only lever for France to truly regulate numbers".

The fundamental rights to family life and to claim asylum mean that France cannot impose outright bans on family reunification or asylum applications.

Foreign students, on the other hand, are often highly sought-after - France currently has a plan to increase its international student population from the roughly 350,000 who currently study here. In immigration terms, foreign students also often return home at the end of their course, although some do stay and France offers an accelerated citizenship programme to anyone who completed higher education in the country.

Immigrants are low-skilled and poor

Focusing on extreme cases of material poverty such as the migrants living in the Calais 'jungle' "overly homogenises a very varied population", Mathieu Ichou, Head of the International Migration and Minorities research unit at the French Institute for Demographic Studies, told The Local.

"On average, immigrants in France have higher levels of education than those who stayed in their country of origin.

"In France, however, the academic and professional qualifications of migrants are not fully recognised, and they frequently suffer from different forms of discrimination. Consequently, the new arrivals struggle to achieve a social status similar to the one they had in their home society."

Immigrants commit a lot of crime

Désinfox-Migrations works to verify and provide context to claims made by politicians and public figures.

For example, the fact that 15 percent of people convicted of crimes are foreigners, who make up 7.5 percent of the population.

While this is true, the majority of these convictions are for minor infractions, or crimes related to their migration status, such as working without papers.

And foreigners are also more likely to be stopped by police and sentenced more harshly, Joannon said.

France processes roughly one fifth of all asylum applications within the EU, which is about commensurate with its size and wealth.

The number of asylum requests has fallen due to the pandemic, but France remained the third destination in Europe for asylum seekers last year, behind Germany and Spain. 19.6 percent of first-time applicants in the EU applied in France, according to Eurostat.

Taking into account the 11 percent of people who were not applying for the first time, 122,015 people requested asylum in Germany, followed by 93,475 in France, ahead of Spain with 88,540. Greece received the fourth largest number of requests (37,900), but this is still more than the 36,041 applicants in the UK.

It's frequently said that asylum seekers are better off than French retirees. In reality, the asylum seekers' allowance is €6.80 per day, so around €204 each month. A further €7.40 is allocated to those who do not have access to free accommodation, meaning asylum seekers receive a maximum of €440 per month. This must cover all their costs, since they are not permitted to work during their first six months in France.

Pensions vary according to the person's previous occupation, but the Allocation de solidarité aux personnes âgées is a top-up benefit for pensioners on low incomes. It guarantees that people over 65 receive a minimum of €906.81 per month - more than double what asylum seekers get - or €1,407.82 for a couple.

Ekrame Boubtane, an economist specialised in international migration, says a consensus has emerged from economic studies on France. Those studies all show "there is no negative effect on the jobs market, in terms of rising unemployment, nor on French people's average standard of living, which we measure using GDP per capita".

"We have clearly shown that migration has in fact contributed to improving the average standard of living in Europe and in France," Boubtane said.

Migrants from outside the European Union, on whom most of the political debate in France is focused, have also had a positive effect on GDP per person, and no visible negative effect on unemployment, she added.

More specifically, family-based immigration is often a target for French politicians, but according to Boubtane, people joining family members have an even greater positive effect on the French economy than economic migrants. First of all, because they are still workers and consumers, and if the person they are joining is a migrant then that person will no longer have to send money back home but will instead re-inject it into the economy.

"The other element of explanation is that, traditionally, family immigration concerns women, and a section of these women will enter the service industry. And people from family immigration don't generally have a job offer waiting for them so they're going to enter sectors suffering from labour shortages, often essential jobs that are paid at the minimum wage. And we don't have a specific policy for bringing over migrants to work in these fields."

The discourse around what the media referred to as a "migrant crisis" in 2015 pushed researchers to undertake similar studies into asylum seekers. While the integration process takes longer and requires greater up-front costs, in the long term, "the economic consequences are comparable to other immigrants," Boubtane said.

Then there are those in the country illegally, either because they entered France without papers, overstayed their visa or were refused asylum.

According to Guiraudon, there are around 250,000 people living in France with no legal status: "The people who deliver your food, or who you see on construction sites or in the kitchens of Paris restaurants. They're very useful for the economy because they're paid very little, but when something like Covid happens they are very fragile."

Immigration also has an effect on the demographics of a country. In 2017, immigrants accounted for 44 percent of French population growth, and also helped to bring down the average age.

According to Boubtane, 62 percent of immigrants who came to France in 2019 were aged between 18 and 34. As workers and consumers who are less likely to have health problems and cannot claim a pension, this age profile means migrants make a positive contribution to public finances in a country with an ageing population where the most significant social security spending goes towards health and pensions.

France’s Interior Ministry is considering changing its current rules for minor speeding violations – proposing getting rid of the penalty for drivers who only violate the rule by going just a few kilometres over the speed limit.

The Ministry has not laid out a timeline for when this could come into effect, but they said they are currently in the preliminary stages of studying how the change could be carried out.

Of the 13 million speeding tickets issued each year in France, 58 percent are for speeding violations of less than 5 km per hour over the limit, with many coming from automated radar machines.

How does the current rule work?

The rule itself is already a bit flexible, depending on where the speeding violation occurs.

If the violation happens in an urban area or low-speed zone (under 50 km per hour limit), then it is considered a 4th class offence, which involves a fixed fine of €135. Drivers can also lose a point on their licences as a penalty for this offence.

Whereas, on highways and high-speed roads, the consequences of speeding by 5 km per hour are less severe. The offence is only considered 3rd class, which means the fixed fine is €68. There is still the possibility of losing a point on your licence, however.

How do people feel about this?

Pierre Chasseray, a representative from the organisation “40 Millions d’Automobilistes,” thinks the government should do away with all penalties for minor speeding offences, including fines. He told French daily Le Parisien that this is only a “first step.”

Meanwhile, others are concerned that the move to get rid of points-deductions could end up encouraging people to speed, as they’ll think there is no longer any consequence.

To avoid being accused of carelessness, France’s Interior Ministry is also promising to become “firmer” with regards to people who use other people’s licences in order to get out of losing points – say by sending their spouse’s or grandmother’s instead of their own after being caught speeding. The Interior Ministry plans to digitalise license and registration in an effort to combat this.

Ultimately, if you are worried about running out of points on your licence, there are still ways to recover them.

You can recover your points after six months of driving without committing any other offences, and there are also awareness training courses that allow you to gain your points back. It should be noted, however, that these trainings typically cost between €150 and €250, and they do not allow you to regain more than four points.