A hot dog stand in Vienna late at night. Photo by Alex Rainer on Unsplash

For people who live in a different country to the one they’ve grown up in, you feel like a foreigner in a strange land up until you return home.

At this point, your old friends might tell you how ‘foreign’ you now are.

While it never stops feeling odd to be between two worlds, if you recognise any of the behaviours from this list below, then you might be a little more Austrian than you think.

OK so this doesn’t apply to Americans and most likely wouldn’t apply to Australians, but for people originally from the British Isles, the shift from tea to coffee can often happen seamlessly and without you even recognising it.

Upon returning home, you might find yourself longing for a Melange or even a Einspänner, when a cappuccino will have to do.

And when the coffee is served, you’ll look at the plate for the accompanying thimble of water and wonder what’s wrong with the waiter, before realising that the shot glass-of-water-with-coffee phenomenon hasn’t made it too far from Austrian shores (or at least outside of German-speaking Europe). Several coffee cups sit next to a plate with cakes at a coffee house in Vienna. Photo by Alisa Anton on Unsplash

You’re stunned that everything is open on a Sunday

Sundays are slow in Austria by design.

And while it can be difficult to get used to at first, before too long you’ll get used to the slow pace of that Sonntagsgefühl (Sunday feeling).

You’ll even get used to doing all your shopping by Saturday evening (no, really).

A sign of the pervasive nature of tall poppy syndrome in English-speaking countries is how we will often shy away from achievements rather than celebrate them.

While false modesty is in short supply in Austria – another cultural quirk which can be difficult to get used to – there is also a desire to recognise when someone has accomplished something (particularly when that involves years of study).

In Austria, it is not only common but is expected to address someone with their titles. Hearing “Herr Doktor” or “Frau Magister” is therefore relatively common, even when speaking in English.

Waiters are often addressed “Herr Ober”, a sign of how common place titles are.

Where titles aren’t used, the use of Mr and Mrs/Ms in conjunction with a person’s last name is the done thing in Austria in almost all business communications, or even making reservations at a restaurant.

If you start sending emails with “Dear Mr Smith” rather than “Dear David” or introducing yourself over the phone as “Ms Fleming”, you’ll know you’re settling into life in Austria nicely.

While Austrians aren’t exactly unfriendly – and many bartenders and waiters will try and make you feel welcome – heading back to America, the United Kingdom or Australia will be quite a shock for anyone who’s spent a fair bit of time in Austria.

The friendly, attentive service that is common place in English-speaking countries not only isn’t common in Austria, but it isn’t well received – with plenty of locals likely to get suspicious rather than tip happy.

This extends beyond bar/restaurant culture and also into formal encounters, including police and other officials. One reader told us about returning to the UK for a football match and being told by a border guard his re-entry was conditional on which team he supported.

Such interactions are almost non-existent in formal situations in Austria, so if you find it weird to have a chat about your personal life with an airport border guard you’ll never see again, then you might be getting a little more settled in Austria than you think.

The reasons are too many and too deep to go into here, but for some reason English-speaking cultures have a tendency to restrict the wearing of one’s birthday suit to the bedroom and solo showers.

Austrians – as any foreigner or even tourist may be aware – tend not to have the same reservations. A naked man stands on the ledge of a pool. Photo by FRED DUFOUR / AFP

Whether you’ve been visiting the sauna, take part in organised sport or even just swimming at a lake, there’s a good chance you’ve seen more than your fair share of nude Austrian bodies.

As a result, from swimming to visiting your doctor, you might find yourself far less reluctant to nude up – which may force a few of your old friends to clutch their pearls if you do it in their presence.

OK, so things are gradually changing, but the prevalence of smoking in Austria can be infectious and at the very least is quite hard to avoid.

Plenty of internationals will now take part in the unique phenomenon of never buying a packet but smoking whenever the beer/wine or schnapps is a-flowing.

If this is you, then you’ll know the Austrian ways are seeping in and you’re slowly becoming a little more settled – but no matter how much of a social smoker you are, you’ll love being in smoke-free bars again. A cigarette burns down in an ashtray which sits inside a bar in Vienna. Bars in Austria still have inside smoking, despite rules against it. Photo: AFP

You meet at the Würstel stand without thinking

The advent of smartphones has meant that most of us no longer organise set meeting spots and stick to them, it’s much easier to call when we get there or drop a pin.

But if you’re really integrated in Austria, you’ll meet a friend at your favourite Würstel (hot dog stand) without even thinking about it, before heading off into the night (or simply sticking around until it closes).

While taking your shoes off before you enter someone’s home or apartment is entry-level Austrian, you know you’re there if you are quietly building a collection of Hausschuhe (house shoes) and think it weird not to have any.

You’ve reached top-shelf Austrian integration if you visit another person’s house and ask where the house shoes for visitors are kept. 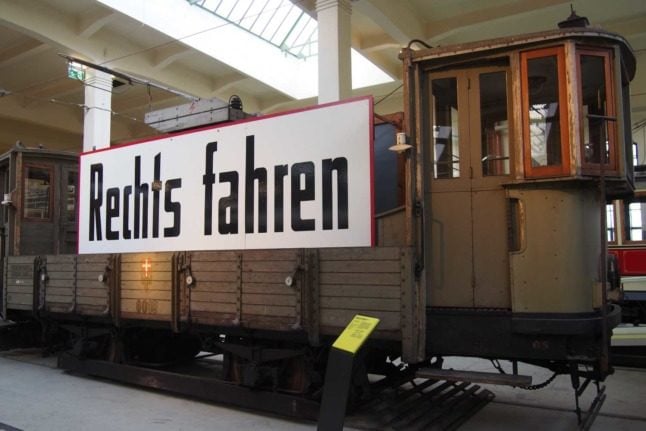 OFFBEAT
Swedish islanders warned to ‘stay away from explosive whale’ 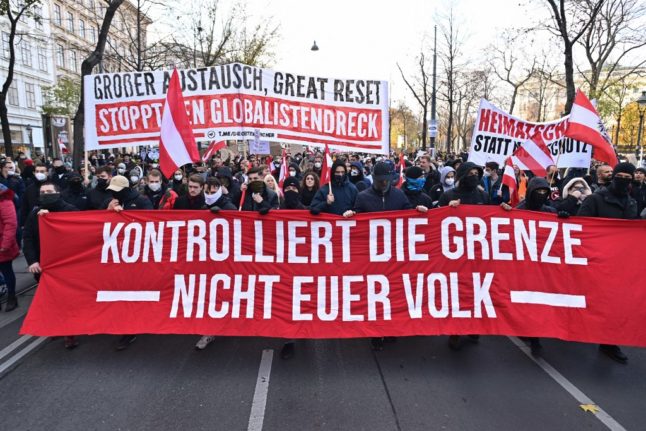 Austria lacks the instruments to identify crises at an early stage, assess risks and develop options for actions, according to the country’s recently published “Risk Assessment 2023“.

Every year, the Austrian Armed Forces evaluate possible risks the country might face, the challenges it needs to overcome and the overall picture of threats. With Russia’s invasion of Ukraine, it became clear once again that the limits of Austria’s neutrality would be tested, according to military experts.

“The war in and around Europe also makes it clear that a well-positioned national defence is of existential importance for a neutral state. Moreover, conventional warfare has regained importance in addition to hybrid threats. Therefore, there is a need for a return to the military protection of Austrian sovereignty against conventionally acting forces”, said Defence Minister Klaudia Tanner in a press statement.

According to her, “comprehensive national defence, which has constitutional status, must regain importance as a core task of the state and be further developed in line with the new challenges”.

The threats and risks facing Austria

The Armed Forces have found that the ongoing war in Ukraine was the greatest threat to Austria and Europe.

They added that “an increase in migration, further Russian confrontation with the EU, a worsening of the energy crisis, the disruption of supply chains, stagflation and an unforeseeable escalation of the war” are other threats directly connected to the conflict.

The world has become more unstable, the military said. Five years ago, it had identified 25 threats in its risk analysis. Now, there were 73 threats analysed. “For the first time since the Federal Ministry of Defence began drawing up its risk assessment, almost all military risks for Austria have increased significantly”, according to the report.

According to the report, “missile attacks on Europe cannot be ruled out”, given the geo-strategic situation. Because of that, the Armed Forces should further develop their ground-based air defence capabilities and the ability to combat aircraft, drones, and cruise missiles.

On the other hand, the military found that the use of weapons of mass destruction, including nuclear, against Austria is unlikely. 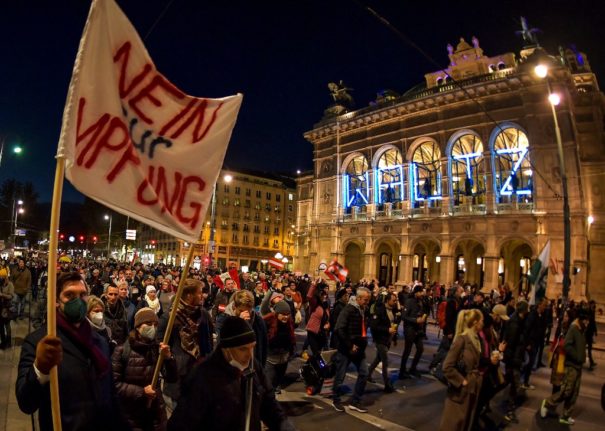 Demonstrators pass the State Opera during a rally held by Austria’s far-right Freedom Party FPOe against the measures taken to curb the coronavirus (Covid-19) pandemic, at Maria Theresien Platz square in Vienna, Austria on November 20, 2021. (Photo by JOE KLAMAR / AFP)

The threat of terrorism

The report did bring some good news, as the authorities stated that the threat of jihadism terrorism has diminished.

“While jihadist terrorism was the main threat ten years ago, today’s picture is far more complex. However, the good news is that the threat from jihadism has decreased, which is related to the successful fight against the so-called Islamic State (IS)”, it said.

However, the report added that there is now a threat from so-called “state resisters”, far-right groups created and grown mainly in the wake of the pandemic that is directed against the state and its institutions.

The authorities said these groups need to be watched closely for two main reasons. First, their narratives are “highly influenced by the so-called conspiracy theories”.

“From their point of view, all state measures are a plot by “global elites” to end freedom and democracy”, they said.

Additionally, the movement is infiltrated by right-wing extremists, the military added. “In both Germany and Austria, far-right groups recognised the movement’s enormous mobilisation potential relatively early on and have since tried to use it for their own purposes”.

The experts said that even though the movement lost its following after most of the Covid measures ended, there are signs that a hard core was radicalised beyond the pandemic. According to them, the same groups and Telegram channels that spread disinformation about health measures now speak of the war in Ukraine and the energy crisis.

READ ALSO: Why is support for Austria’s far-right FPÖ rising?

“Given the current economic situation, it is not only conceivable but probable that a radicalised state-refusal movement will regain popularity and provoke an increasingly aggressive confrontation with the state”, they added.

What about blackout risks?

The topics of power outages and blackouts have been the subject of public discussion – and fear-mongering – for several years. However, from the point of view of technical experts, a blackout is unlikely. This is because the continental European system is seen as very stable.

READ ALSO: Reader question: What are the chances of blackouts in Austria?

At the same time, though, the war in Ukraine has highlighted the need to diversify the supply of gas and fossil fuels in general and expand the use of renewable energy sources.

‘Challenges in and from cyberspace’

Austria’s report specially analysed virtual threats, saying that due to rapid digitalisation, “our society and the military are becoming increasingly interwoven with the virtual world”. The experts defended a need for Europe to have its own assets in terms of hardware and software to become less dependent on the Asian and American markets.

“In addition to the EU’s own chip production activities, a European operating system with high-security standards would be highly desirable”, they said.