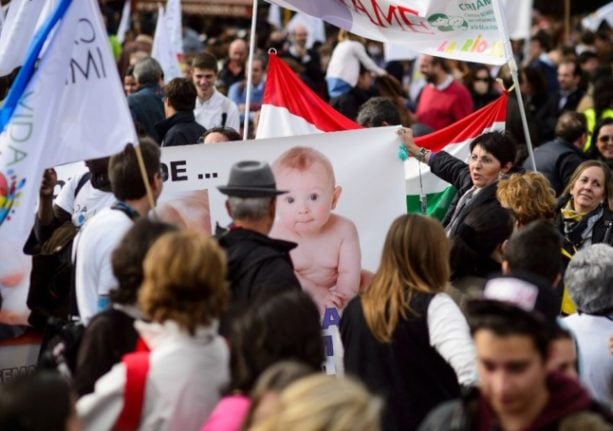 Anti-abortion supporters take part in a march in Madrid in 2014. In Spain women have the right to abortions up to the 14th week of their pregnancy, but many doctors across the country refuse to perform the procedure. Photo by DANI POZO / AFP

Under the current legislation introduced by the previous Socialist government in 2010, women in Spain have the right to abortions up to the 14th week of their pregnancy, which is standard in much of Europe.

They also have the legal right to abort up to the 22nd week of pregnancy in cases where the mother’s health is at risk or the foetus has serious deformities.

However, in practice this law translates into a very different reality.

Many doctors across Spain refuse to practice abortions, calling themselves “conscientious objectors”.

So many doctors deny the procedure across the country, that in five out of the 17 autonomous regions in Spain, no public hospitals offer abortions, according to data from the Health Ministry.

This causes stark regional inequalities, forcing thousands of women to either travel to another part of the country, or pay for one in a private clinic, despite the 2010 law stating that “all women should benefit from equal access to abortion regardless of where they reside”.

According to the data, the provinces of Teruel, Ávila, Palencia, Segovia, Zamora, Cuenca, Toledo and Cáceres have not performed a single abortion in the past 30 years.

And, another even more revealing statistic: in 2019, 85 per cent of abortions took place in private clinics.

The map below shows the provinces that never perform abortions in red, the ones where it has varied over the years in orange, and the ones where they have always been available in green.

The minister of equality, Irene Montero, has proposed a reform of the current law that would limit doctors being able to refuse the procedure.

“Conscientious objection cannot be an obstacle for women to exercise their right to terminate a pregnancy,” Montero said in a tweet. “We must reform the law to regulate it and make sure abortion is guaranteed in the public health system.”

Montero said the draft law would be ready in December after a consultation process.

However, others have said doctors should not be forced to perform abortions.

The president of Madrid’s regional government, Isabel Díaz Ayuso, said she would not force “any doctor in Madrid’s public health system to practice an abortion against their will” because doctors study medicine “to save lives and not to do the opposite”.

The situation shows abortion remains a dividing issue in Spain, where a large part of the conservative population is still opposed to a law that was introduced over a decade ago.

The former conservative Prime Minister Mariano Rajoy had promised to tighten Spain’s abortion law before he came into power in 2011.

However he was forced to drop the plans in 2014 due to disagreement within his Popular Party (PP). This angered many Catholic and other pro-life groups.

The reform would have ended women’s rights to freely terminate their pregnancies up until the 14th weeks.

In 2015 Rajoy’s government passed another reform requiring girls aged 16 and 17 to get their parents’ consent if they wished to terminate a pregnancy. But the measure failed to pacify pro-life campaigners.

Montero also announced plans to repeal the 2015 reform as part of the draft law.

In a new recommendation, the agency said that those living in elderly care centres, and those above the age of 80 should from March 1st receive two vaccinations a year, with a six month gap between doses.

“Elderly people develop a somewhat worse immune defence after vaccination and immunity wanes faster than among young and healthy people,” the agency said. “That means that elderly people have a greater need of booster doses than younger ones. The Swedish Public Health Agency considers, based on the current knowledge, that it will be important even going into the future to have booster doses for the elderly and people in risk groups.”

People between the ages of 65 and 79 years old and young people with risk factors, such as obesity, diabetes, poor kidney function or high blood pressure, are recommended to take one additional dose per year.

The new vaccination recommendation, which will start to apply from March 1st next year, is only for 2023, Johanna Rubin, the investigator in the agency’s vaccination programme unit, explained.

She said too much was still unclear about how long protection from vaccination lasted to institute a permanent programme.

“This recommendation applies to 2023. There is not really an abundance of data on how long protection lasts after a booster dose, of course, but this is what we can say for now,” she told the TT newswire.

It was likely, however, that elderly people would end up being given an annual dose to protect them from any new variants, as has long been the case with influenza.