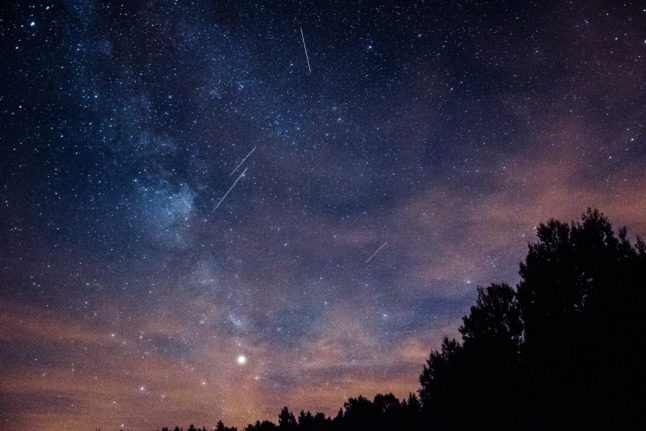 
The Perseid meteor shower is a yearly event for stargazers in the Northern Hemisphere. Here's The Local's guide to everything you need to know if you're planning on watching it in Norway.

Put simply, comet trash. Meteors are small pieces of matter from outer space that become incandescent when they enter the Earth’s atmosphere and appear in the night sky as streaks of light.

Perseid is one of the brightest meteor showers of the year in Norway and northern Europe. The space particles that will be lighting up the night sky will come from the comet Swift-Tuttle.

The debris is called Perseids because it comes from the same direction as the constellation Perseus, found in the north-eastern part of the sky.

Norway has been struck by meteor fever recently. Experts and amateur astronomers alike have been hunting for a meteorite (a meteor that survives crash landing) that is thought to have landed in Lier, Finnemarka, at the end of last month.

VIDEO: ‘We can only hope it landed in water’– Norway hunts for signs of meteorite

When is the best time to watch?

Forecasters have said that Thursday will be the best night to witness the shower due to a new moon and clear skies on the cards for parts of Norway. It’s expected that more than 150 meteors per hour will be whizzing through the skies at speeds of around 210,000 km/h on Thursday and Friday.

The prime time to watch the shower is between 11pm and 4.30am, so you may need to pull an all-nighter or go to bed and get up much earlier to make the most of the meteor shower.

Where’s the best place to watch?

Geographically speaking, Western Norway and the counties of Møre and Romsdal, Inland and Trøndelag have the best forecasts for stargazing for Thursday and Friday.

That doesn’t mean you won’t be able to see it elsewhere, but you’ll need to get away from the bright lights of the city and avoid any nearby light pollution such as torches or the headlights of cars. Try finding an open area where trees and buildings don’t obstruct the view.

What do I need to bring, and what are the top tips?

Luckily you can leave the fancy telescopes and expensive binoculars at home or on the shop shelves if you don’t own any.

Even though it’s summer, Norway isn’t known for its sweltering heat, especially once the sun goes down, so be sure to bring a warm jacket along.

In addition to this, bringing a foldup chair and a blanket so you can sit or lie down could probably be classed as essential as astronomy is a waiting game. A picnic is also a good idea if you feel like making a night of it. But make sure you keep your eyes on the sky and aren’t too distracted by your midnight feast.

In terms of top tips, try to look in a north-easterly direction where possible. Don’t worry if you can’t. You should be able to see some meteors anyway.

Also, be sure to turn off any light sources such as head torches and give your eyes 30 minutes to adapt to nighttime conditions.