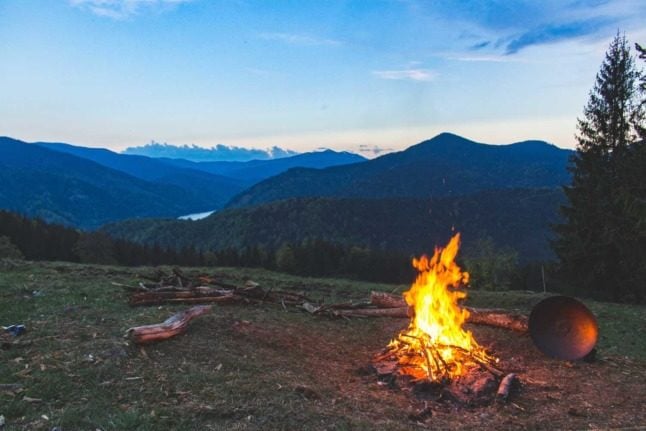 A bonfire. Photo by Vlad Bagacian from Pexels

Anyone who has lived in Switzerland knows that (weather and Covid permitting) families gather together to celebrate this holiday in practically every town and village.

Beyond the usual meals of grilled sausage, bread, and wine, as well as fireworks displays organised by local communities across Switzerland, some other customs and traditions are part of the August 1st festivities as well.

While the ongoing coronavirus pandemic will of course mean things will look and feel a little different this year, many of the traditional celebrations will go on – at least in smaller numbers.

Parties on the meadow where Switzerland was born remain a popular option, while bonfires and brunch are contemporary symbols of Swiss National Day.

When did Switzerland first celebrate its birthday?

On Sunday, August 1st, Switzerland will be 730 years old, but it didn’t actually first celebrate its birthday until 1891.

It may be that Helvetians of that time had too much on their plate creating the new state and ensuring their autonomy to throw elaborate birthday parties.

Be it as it may, that first celebration was intended as a one-off event to commemorate the nation’s 600 anniversary. It was revived as an annual event in 1899 and became an official public holiday in 1994.

The decision to make the day a holiday was made in the most Swiss way possible – a referendum.

Switzerland’s birthplace on the Rütli meadow

The official part of the celebration takes place on the Rütli meadow above Lake Lucerne.

This is considered the birthplace of the Swiss nation because that’s where cantons of Uri, Schwyz and Nidwalden – the country’s founding cantons – are believed to have signed the legendary pledge of alliance in 1291. They promised to “assist each other by every means possible against one and all who may inflict on them violence or injustice within their valleys and without”. Nothing neutral about that.

In 2021, the celebration is set to be limited to 600 people, due to pandemic measures.

The 2021 edition includes a special commemoration of women’s suffrage, with 2021 being the 50th year since women were given the vote at a federal level in Switzerland.

EXPLAINED: What happened after Swiss women got the right to vote in 1971?

But other places have a strong connection to August 1 as well.

One is the Rhine Falls near Schaffhausen, which is the largest waterfall in Europe by volume of water.

From mid-19th century onwards, the waterfall has been illuminated on special occasions, including on August 1. This custom doesn’t go back all the way to 1291, but it is nevertheless very popular in modern Switzerland.

While nobody is quite sure where the brunch tradition came from, it sprung up in the mid-1990s through a network of farmers who wanted to offer their wares to the increasingly urbanised Swiss population.

The tradition gained popularity due to the warm August weather and the comparative low cost of brunching on a farm in notoriously expensive Switzerland, while city dwellers also enjoy the tradition as a way of getting their kids familiarised with where cheese, eggs and meat come from.

READ MORE: What is actually ‘cheap’ in Switzerland?

Farmers in communities around Switzerland organise morning or midday meals where homemade specialties from a particular region are served.

Brunch is held at more than 350 farms across the country between 9am and 1pm on Swiss National Day. Though hugely popular, you might still be able to find an available brunch – visit brunch.ch for details.

Pre-registered visitors can enjoy a copious buffet brunch of farm-grown products including cheeses, dried meats and homemade bread. “It’s a great way to spend the day with strangers and meet some new people,” Little Zurich Kitchen’s Wick told The Local.

It’s a lot of fun for everyone, including the kids, as many farmers offer horse carriage rides, petting zoos and other games and entertainment. Brunch on a farm. Photo by Brunch.ch

Another Swiss tradition – and one which dates back a little longer than brunching – is lighting large bonfires which can be seen from far away.

Fire has a strong association with tradition in Switzerland – and particularly with Swiss National Day. On August 1st in the dark of the night, children from each town or village form a procession and walk through the streets carrying lit paper lanterns.

While bonfires are a clear cultural tradition, depending on who you ask there are a variety of reasons for why this has become so popular.

The bonfire predates Swiss National Day – and some believe it predates Switzerland itself, with bonfires being a Christian adoption of previous midsummer traditions.

According to Switzerland Tourism, “bonfires, mainly on hills and other elevated spots, commemorate the expulsion of foreign bailiffs in the 14th century, the news of which were spread in this manner in those days.”

Germany’s Südkurier newspaper – which hails from the neighbouring state of Baden-Württemberg – sees it a little differently, writing that the tradition goes back to the 15th century, when bonfires were used to warn neighbouring towns and villages of the incursion of enemy troops.

The Luzerner Zeitung sees it relatively similarly, saying that bonfires were the easiest means of communication and would carry a variety of messages.

Over time, the notion of lighting fires to warn and communicate with neighbouring communities became a symbol of Swiss unity – and have retained their place to the modern day.

There are currently 2.2 million foreign nationals living in Switzerland — roughly 25 percent of the population.

Simply put, everyone residing in the country legally, regardless of nationality, has the same basic constitutional rights as Swiss citizens do — for instance, the right to human dignity, free expression, equality, protection against discrimination, and freedom of religion, among other rights.

They also have the right to fair and equitable treatment in the workplace, in terms of wages, work hours, and other employment-related matters.

As the law states, cantons and municipalities “shall create favourable regulatory conditions for equal opportunities and for the participation of the foreign population in public life”.

If they are arrested or imprisoned, foreigners also have the right to fair trial and to the same treatment as their Swiss-citizen counterparts, including legal representation and due process of the law.

Even those who are subject to deportation have the right to be represented by a lawyer.

And the Swiss legal system doesn’t necessarily favour Swiss litigants over foreign ones. For instance, in some cases, foreign nationals whose request for naturalisation was denied but who then appealed the decision, eventually won.

The most recent example is a man in the canton of Schwyz whose application for citizenship was rejected due to a minor car accident, but a Swiss court overturned the decision, ordering that the man be naturalised this year.

Where the rights and privileges differ between foreigners and Swiss, as well as among foreigners themselves, is when it comes to work and residency rights.

People from these countries, who have B or C permanent residence status have sweeping rights in terms of residence, employment (including self-employment), and home ownership.

The only right that is denied them is the vote, though some cantons and communes grant their resident foreigners the right to vote on local issues and to elect local politicians.

READ MORE : Where in Switzerland can foreigners vote?

Apart from the limit on political participation, EU / EFTA nationals can live in Switzerland in pretty much the same way as their Swiss counterparts.

There are, however, some groups of foreigners whose rights are curtailed by the Swiss government.

They are people from countries outside Europe, for whom various restrictions are in place in terms of entry, employment and residency.

For instance, their “future employer must prove that there is no suitable person to fill the job vacancy from Switzerland or from an EU/EFTA state”, according to State Secretariat for Migration. This could be seen as a discrimination of sorts, but that’s what the law says.

Once employed, however, “their salary, social security contributions and the terms of employment must be in accordance with conditions customary to the region, the profession and the particular sector” — in other words, no discrimination is allowed.

Another area where non-European foreigners are disadvantaged in comparison with their EU / EFTA counterparts is home ownership. While third-nation B-permit holders can buy a property to live in (but not rent out), they can’t purchase a holiday or second home without a special permission.

To sum up, all foreigners in Switzerland, regardless of their status, are entitled to fundamental “human” rights, including freedom of speech and religion, and freedom from discrimination in life and employment.

They also have the right to legal protection and representation during litigation or other court actions.

However they don’t have the right to participate in the country’s political process and, depending on their status, have equal access to residency and employment.