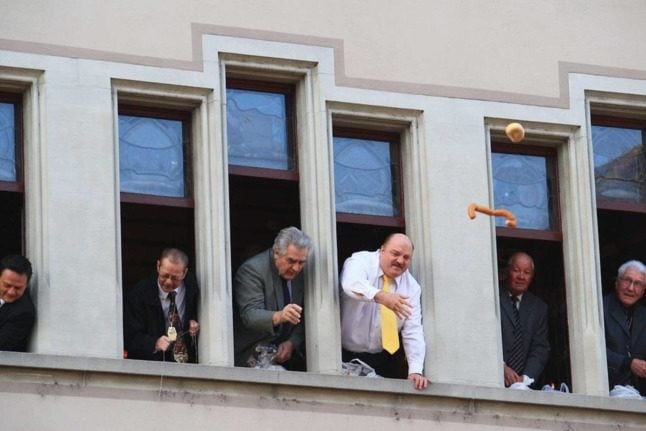 In a previous article, we established that the Swiss do actually have a sense of humour.

This is reflected in some decidedly off-the-wall ways that people across Switzerland celebrate various regional holidays.

These five from various regions of the country go above and beyond the usual folkloric displays of yodelling, alphorn playing, and flag waving.

Some of them are related to things many of us think of as quintessentially “Swiss” — such as cattle and guns— while others, well, they just sound like a real barrel of fun.

In a country with a pacifist reputation, the cows can get quite combative.

The Hérens breed of cattle, which are specific to some regions of Valais, are known for their sense of hierarchy and feisty nature.

They take no bull from anyone.

Only one can be crowned as queen, so while the spectators cheer from the stands, the cows literally lock horns in their fight for supremacy within the herd, canton, and even the nation, in what has become an annual event held in the spring in the appropriately named Val d’Hérens. READ MORE: EXPLAINED: Why are cows so important in Switzerland?

Each September, the sound of gunfire resounds around Switzerland’s largest city.

It is just a bunch of teenagers doing what comes naturally to nearly every Swiss: sharpshooting.

But there’s nothing worrying about it, as the 12- to 16-year-olds are participating in Knabenschiessen (don’t try to pronounce it ), the world’s largest youth rifle competition.

It is one of the oldest in Switzerland, dating back to the 17th century — well before Switzerland’s other weapon, the army knife, was invented.

While the sight of youngsters walking around with rifles slung across their shoulders may alarm some people, it shouldn’t. This is, after all, Switzerland, where guns are as much a part of culture as cheese, chocolate and…fighting cows. Scaring your fellow villagers sounds like loads of fun and residents of Ettingen, a community in Basel-Country, have taken this practice to a whole new level.

So much so that Pfingstbluttlern (again, don’t try to pronounce it) is now a local tradition, part of a little-known ancient fertility ritual.

Simply put, during the Pentecost, local men dress up as bushes, parade around town, accost women, and dump them in fountains, all in the name of fun and tradition. The Federal Office of Culture

If the name of this holiday sounds like “Funky Sunday”, it’s because it is.

What it actually means is “Spark Sunday”, so named after an old custom in which communities around Appenzell competed to see who can produce the greatest spark.

But what is actually funkier (and at least as dangerous) than setting fire to bales of straw is children lighting up cigarettes.

Children are allowed to smoke cigarettes and cigars for the duration of the festival, but need to pack the smokes away when the festival is over.

As you can probably see from the images, they certainly enjoy it.

These days, the Funkensonntag is a cattle festival held in October — the only such event in Switzerland (and possibly elsewhere as well) where children are allowed to smoke.

Nobody actually knows how this custom originated or why it is still allowed, but it is probably one of the weirdest. Most people in Switzerland eat sausages, not toss them out the window.

Except in Rapperswill, canton St. Gallen, where the sausage-tossing is an actual tradition, believed to date back to the siege and destruction of the town on February 24th,1350.

Basically, each year on that day the windows of the town hall open and a council member asks “Sind alli mini Buebe doo?” (Are all my boys here?).

Hundreds of expectant children gathered in front of the building shout back “Ja! Eis, zwei, Geissebei!“(Yes, one, two, goat-leg), after which sausages and other foods are tossed out of the window.

We don’t know whether the children then light up their cigarettes or get their guns and go shooting.

There you have it — five truly weird Swiss traditions you should know about (though you may wish you didn’t). 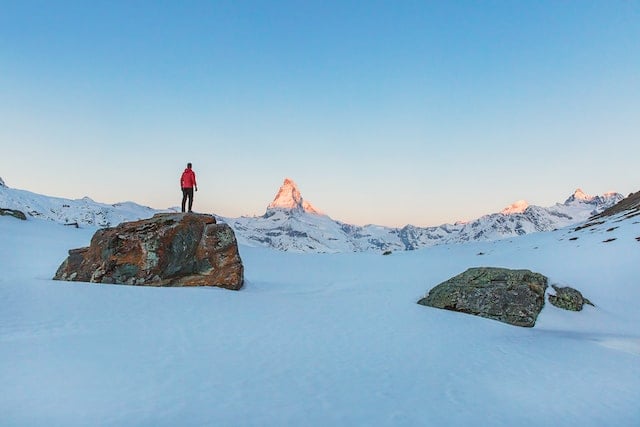 Four weeks (20 days) is the strict legal minimum for people working 41 hours per week, which counts as a full-time position.

However, many companies offer their employees more than the legal minimum; the exact number of days or weeks is outlined in an employment contract.

For part-time work, the four-week period is pro-rated according to the number of hours an employee works each week.

However, there is an astute way of extending your vacation time without taking off too many additional work days. This is how.

As Christmas Day (December 25th) and New Year Day (January 1st) are public holidays, some businesses close down during the entire period between the two holidays, giving their employees the days between the two dates as holiday time (in addition to the statutory four weeks).

This year, however, both Christmas and New Year fall on a Sunday, so you don’t really gain anything. However, if they fall on, say, Friday or Monday, then in the very least you get a nice long weekend.

There is a movement among Swiss labour unions to provide a compensation day if a public holiday falls on the weekend, as it does this year, but so far there has not been any response from the employers’ associations.

Another longish “time off” period is around Easter: Good Friday (April 7th in 2023)  is a public holiday nearly everywhere in Switzerland, except in Ticino and Valais, as is Easter Monday (April 10th), with the exception of Neuchâtel, Solothurn, Valais and Zug.

So if you live anywhere in the country except those cantons, you can take the Thursday before and Tuesday after Easter as two “holiday” days and enjoy an almost week-long vacation which will “cost” you only two days from your 20-day yearly allowance.

You can do the same with other public holidays — for instance, next Ascension Day in on Thursday, May 18th, but many companies don’t work on Friday, making it a four-day weekend.

Again, if you take at least another day off either before or after — that is, Wednesday May 17th or Monday May 19th, you will have a five-day holiday for the price of one day from your yearly allowance.

So far, with the above combinations, you have lost three days out of 20, but have gained six and five days of holidays, respectively.

You can also do the same around other public holidays as well, either national ones or those specific to your cantons.

Why do the Swiss have so little time off anyway?

Many other European countries give their workers longer vacations — in France and Austria, for instance, employees are entitled to five weeks.

But the Swiss themselves are to blame for their briefer leave: in a 2012 referendum, 67 percent of the country’s voters rejected (yes, rejected) the proposal to extend the mandatory leave to six weeks.

They did so because they believed longer holidays would cost the economy billions of francs each year, and the money-conscious Swiss just couldn’t allow that.

As the media reported at the time, the outcome showed that Swiss voters had realised “something which sounds nice at first, on closer look brings many disadvantages” and that “citizens have kept a sense of reality.”

READ MORE : Everything you need to know about annual leave in Switzerland