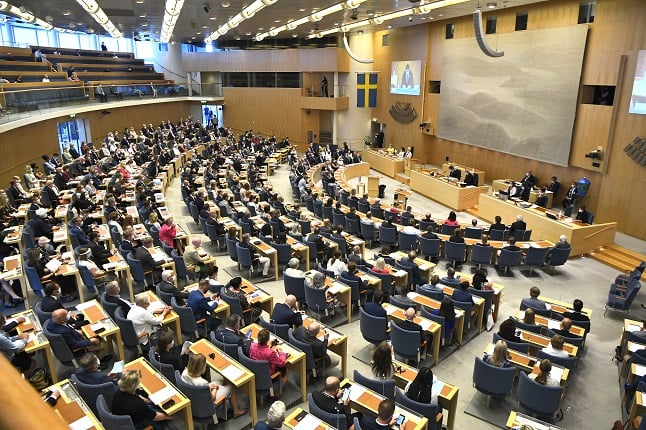 Parliament was fuller than it has been in a year for the no-confidence vote, which saw 181 MPs vote against the current government. Photo: Claudio Bresciani/TT

“The government has not been effective. This has been on the cards for a long time. It is the ultimate price of being passive during one of the biggest public crises of the modern day, and delivering really poor reforms.” – Matthew

““The Left Party wants to make a strong point on market rents, but it doesn’t really, really want to topple the government, just… shake it up a little bit.” [This quote is from The Local’s article explaining how the crisis arose, which you can read in full here)]. Just for the record, this is exactly what a bunch of Americans said about why they voted for Trump; they didn’t really like him, but they liked “government” less, so they just wanted to ‘shake it up a bit.’ The Sweden Democrats definitely want to topple this government.” – an American living in Skåne

“Löfven’s arrogance is a summer present on a silver platter to the Swedish right. The question is, what was the end game really? Marknadshyra [rent controls, the issue that caused the rift] was just an unnecessary move given the volatility of the political environment, pandemic and high cost of living for the poor who can’t afford to buy apartments. When exactly did socialists start sacrificing power in pursuit of neo-liberal politicies.” – Dennis Johanes

Catch up on Sweden’s political crisis:

“No matter if you are right or left oriented, using political tricks, instead of working closely and negotiating, in times like now is simply stupid. I’m really sad that this way of politics also came to Sweden. It is important to constantly raise that politicians are to serve and help with running a country. Not fight in the name of their short term election interests.” – Anders

“It’s all a bit confusing at first. However, with a bit of digging it’s clear why the Left Party chose the path they did. At the same time, as an immigrant without permanent status in this country, the possible outcomes of this situation terrify me very much. Once again I feel as though I don’t have a say in my own future or any stability to rely on.” – Allie Lindo

“I have been living in Sweden for seven years and I’m thrilled to see where this takes us. Finally kicking out the lagom mentality with this PM.” – a reader who asked to be identified as a Latino in Sweden

“Refreshing, when compared to the Brazilian political situation that I’m used to.” – Caio, an engineer in Gothenburg

“[Löfven] loves the office more than the country and there’s no way Sweden will get rid of him… you just wait and see.” – a former political science graduate living in Stockholm

“With the increasing populism, focus on wedge issues instead of actual social problems, and now a clear centre vs right-wing consolidation, Sweden politics are starting to look a lot like politics in the USA.” – American in Gothenburg

Meanwhile, several readers responded with comments on the politicians’ use of face masks while casting their vote. Face masks were not advised in crowded public places in Sweden on a national level until January 2021, when the Public Health Agency recommended their use on public transport during weekday rush hour, though several regions introduced their own recommendations:

What stood out for me is the fact that they are all wearing masks after a year of saying masks are not necessary and many Swedes gaslighting people who wore them. The imagery speaks volumes #EyeService https://t.co/c6qPSASm6H

The responses published are a sample of those we received through our social media channels and in a survey.