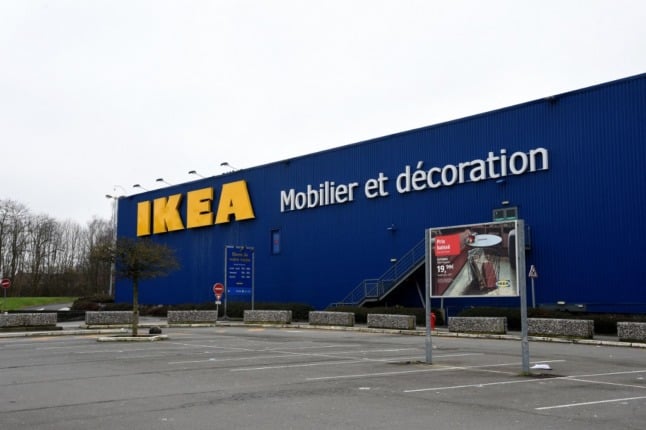 The French unit of the Swedish furniture giant was fined one million euros while its former chief Jean-Louis Baillot was handed a suspended two-year prison term and ordered to pay €50,000.

They were found guilty of “receiving personal data by fraudulent means,” though the sentences were less severe than sought by prosecutors who accused them of illicitly carrying out “mass surveillance”.

Baillot, who was chief from 1996 to 2002, denied any wrongdoing during the trial that began in March in the Paris suburb of Versailles.

He was “shocked” by the ruling and is weighing an appeal, his lawyer Francois Saint-Pierre told AFP.

The trial focussed on spying allegations that dated from 2009 to 2012, but prosecutors say the system was set up nearly a decade earlier under Baillot’s watch.

Ikea’s former head of risk management, Jean-Francois Paris, who was accused of being at the heart of the spying system, was handed a suspended 18-month prison term and a fine of €10,000.

“Ikea takes the protection of co-worker and customer data very seriously,” the company said after the ruling.

“Ikea Retail France has strongly condemned the practices, apologised and implemented a major action plan to prevent this from happening again,” it added.

“We will now review the court’s decision in detail and consider if and where any additional measures are necessary.”

The scandal broke in 2012 when French media reports claimed Ikea’s management had obtained private personal data on employees, for example on people active in labour unions or works councils.

Some 400 employees were targeted by the programme, state prosecutor Pamela Tabardel told the court, urging judges to send a “strong message” on the threat of illegal spying by employers.

“What’s at stake is the protection of our private lives against the threat of mass surveillance,” she said during the trial.

Paris, the risk manager, admitted to sending lists of names of people “to be tested” to Eirpace, a private security firm, running up annual bills of up to 600,000 euros, according to court documents seen by AFP.

In one case, Paris wanted to know how an employee could afford to drive a brand-new BMW convertible, while in another he sought to know why an employee in Bordeaux had “suddenly become a protester”.

Emmanuel Daoud, a lawyer for Ikea France, rejected the spying accusations but acknowledged that the case had revealed “organisational weaknesses”.

“Whatever the court rules, the company has already been punished very severely in terms of its reputation,” he said ahead of the trial.

Founded in 1943, Swedish multinational Ikea is famous for its ready-to-assemble furniture, kitchen appliances and home accessories which are sold in around 400 stores worldwide.

There are thousands of employment offers in France – a simple internet search for jobs d’été came up with numerous jobs boards offering work in France, while the government-backed Centre d’Information et de Documentation pour la Jeunesse (CIDJ) offers advice and information on all aspects of life for young people in France, including finding seasonal work and summer placements.

Sectors including agriculture, hospitality and tourism are always recruiting in the summer, seeking fruit-pickers, holiday camp workers and serving/hotel staff.

But what are the rules for people seeking summer jobs?

READ ALSO Vendange: What you really sign up for when you agree to help with the French wine harvest

Children from the age of 16 (under certain circumstances, the age limit drops to 14) who are legally resident in France can work as long as they have written authorisation from their parents or legal guardians. A model authorisation letter is available here.

Those under the age of 18 cannot undertake certain jobs for health and safety reasons.

In the following circumstances, children as young as 14 or 15 can work during school holidays.

Salary is usually paid monthly and will have a payslip. For those aged 18 and over, pay will be at least equal to the minimum wage.

Under 18s have certain additional protections:

Right to work in France

If you’re a French citizen or hold permanent residency in France then you have the right to work, but for foreigners there are extra restrictions.

Anyone who holds the passport of a EU/EEA country or Switzerland, is free to work in France or to travel to France seeking work without needing a visa or work permit.

Most other people will need permission to work in France – even if it’s only for a short period or for casual work such as grape-picking. Depending on your country of origin you may need a visa – everything you need to know about that is here.

In addition to the visa, you may also need a work permit, which is the responsibility of the employer.  To employ anyone in France for less than 90 days, an employer must get a temporary work permit – before the prospective employee applies for a short stay visa. This permit is then sent to the embassy at which the employee is applying for a visa.

If you come from countries including the UK, USA and Canada you can spend up to 90 days in France without a visa – but you may still need a work (convention d’accueil) if you want to work while you are here.

Certain countries have specific ‘seasonal worker’ visas on offer, for certain sectors which allows – for example – Canadians to come to France and work the ski season.

Certain sectors which have a lot of casual workers – for example seasonal fruit-picking – do have cash-in-hand jobs, known in France as marché noir (black market) or simply travail au black (working on the black, or working illegally).

This is of course illegal and working this way carries risks – as well as the possibility of losing your job if labour inspectors turn up you are also in a vulnerable position. If your employer suddenly decides not to pay you, or make unexpected deductions from your wages, there is very little you can do about it since you won’t have any kind of work contract.