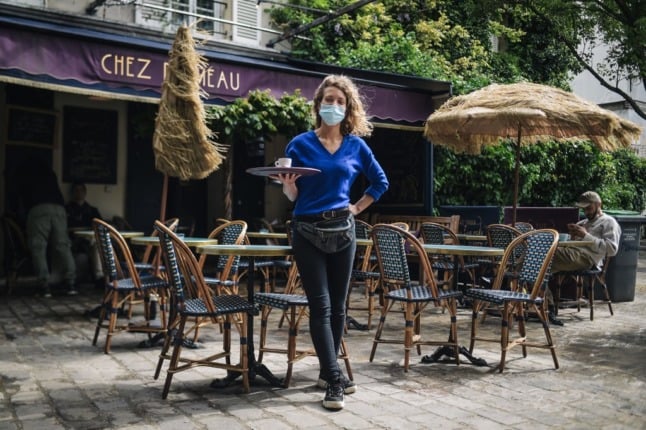 Entry to the interior of a bar, restaurant or café will involve scanning a QR code. Photo: Lucas Bariolet/AFP

Wednesday, June 9th marks phase 3 of France’s reopening plan – the curfew moves back to 11pm, working from home is no longer be the rule and gyms and swimming pools reopened under strict health protocols.

IN DETAIL: France’s plan for reopening after lockdown

It also means that cafés, restaurants and bars won’t have to worry about bad weather, as indoor dining is finally permitted again.

But there are questions arising as to how the French government will keep track of any Covid issues that may arise.

For large events like concerts, a ‘health passport’ will be required, where customers will have to show a code for either a vaccination certificate or a recent Covid test.

READ ALSO How France’s health passport will work this summer

This is not required for cafés, bars, restaurants, gyms and other places deemed “everyday activities” and people can enter those without having to provide any proof of their test or vaccination status.

Instead, establishments must provide a ‘sign in’ for customers to provide their name and contact details, so that if a fellow customer or staff member later tests positive for Covid they can be traced and contacted.

This can be provided either in a paper format or by a QR code that customers can scan with a smartphone.

This does not apply to terraces, only for people eating or drinking indoors at bars, cafés or restaurants.

How does the QR code work?

The black and white square QR codes have been widely used during the pandemic, with many restaurants replacing their menus with scannable codes to avoid cross-contamination.

For the sign-in code, first you must download the French Covid tracking app TousAntiCovid (if you have not already) which then links to a web page where you can fill in your name and contact details.

The government is urging restaurants to use these, as they are quicker and simpler to use and keep data more secure than a paper sign-in sheet which can be seen by all customers.

For people who do not have a smartphone, or don’t want to scan the code, a paper journal will be provided in order for them to leave their details.

If an individual tests positive for Covid they should notify the Tous Anti Covid app, which will activate a code that sends an alert to people who scanned the same restaurant’s QR code on the same date.

All data will only be stored on the individual’s phone and will be erased after two weeks.

In France, you can buy  a very particular kind of stamp to cover the cost of a titre de séjour, or French passport, to pay your taxes, get an ID card if you’re eligible, or pay for your driving licence.

Basically a timbre fiscale is a way of paying a fee to the government, and some online processes – such as the tax offices – now have the more modern method of a bank transfer or card payment.

However there are plenty of official tasks that still demand a timbre fiscale.

In the pre-internet days, this was a way of sending money safely and securely to the government and involved an actual physical stamp – you bought stamps to the value of the money you owned, stuck them onto a card and posted them to government office.

They could be used for anything from paying your taxes to fees for administrative processes like getting a new passport or residency card.

These days the stamps are digital. You will receive, instead, either a pdf document with a QR code that can be scanned from a phone or tablet, or an SMS with a unique 16-digit figure. Both will be accepted by the agency you are dealing with.

Once you have the code you need, you can add this to any online process that requires timbre fiscaux (the plural) and that will complete your dossier.

You can buy them from a properly equipped tabac, at your nearest trésorerie, or online.

Paper stamps remain available in France’s overseas départements, but have been gradually phased out in mainland France.