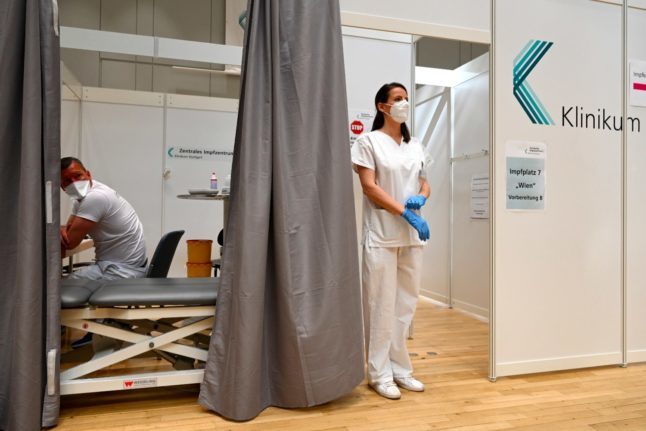 There are fresh calls for penalties for those who try to dupe vaccination centre staff or GPs.

“Thousands are caught, but there are no sanctions,” said the board of the German Foundation for Patient Protection, Eugen Brysch, reported Spiegel on Tuesday.

Pushing to the front of a line for a Covid vaccine when you’re ineligible is not classed as an offence by authorities. But, according to German media reports, many vaccination centres are concerned about the aggressiveness of those who want a jab – and their increasing attempts to obtain it.

The Hamburg vaccination centre alone reported that 2,000 people tried to skip the queue in one week. In order to get a vaccination appointment early, people have been giving a false age or occupation, the centre said.

In Munich, up to 350 people are being caught trying to jump the queue every week, and in Saarbrücken up to 140 people are doing this.

The editors of the show asked vaccination centres in the state capitals for information, but not all of them are recording the numbers of people who have tried to jump the line.

“The mood is getting more aggressive. Some people know that they are not entitled, and yet they try to get vaccinated,” Martin Helfrich, spokesman for the Hamburg social authority, told the broadcaster.

According to the report, research shows that vaccine fraudsters often pretend to be high-priority contact persons for people in need of care or pregnant women.

A person in need of care or a pregnant woman can name two contact people who can be vaccinated as a priority.

The SWR team said they were aware of a case when eight young and healthy people – instead of two – managed to get vaccinated as contact persons.

Vaccines have become even more desirable after the German government said fully vaccinated people – and those who’ve recovered from Covid-19 – face fewer coronavirus restrictions. They no longer have to stick to, curfews, contact restrictions and most quarantine rules, for example.

READ ALSO: How do you prove you’ve been vaccinated or have recovered from Covid-19?

Germany follows a strict priority order on who gets the vaccine first, based mainly on age, health condition and occupation. This is set to be lifted some time in June and opened up to all adults. Currently states are vaccinating priority groups two and three, which includes the over 60s and key workers.

The requirements on who can get a vaccine first is based on the recommendations of standing vaccine committee STIKO.

State health ministers on Monday, however, lifted the vaccination prioritisation for Johnson & Johnson, opening it up to all adults. Last week the AstraZeneca vaccine was also opened up to all adults across Germany.  Previously only a handful of states had lifted the priority order for AstraZeneca.

READ ALSO: Germany makes J&J available to all adults: What you need to know

Both vaccines are associated with very rare serious side effects linked to blood clotting conditions. For this reason, Germany advises that they are given to people over the age of 60.

However, if someone under 60 wants one of these vaccines it is possible after a risk analysis and consultation with the doctor giving the vaccine.

With a view to the tide of people who want to get a jab, Brysch said: “Now vaccines are being released (to all adults). This creates massive pressure in the vaccination centres and among general practitioners.

“We hear about psychological and physical threatening gestures on the patient protection hotline.”

In February, the Patient Protection Foundation (die Stiftung Patientenschutz) demanded penalties for those who were caught skipping the line in Germany, but no action was taken.

But it is a tricky topic as doctors have been vaccinating people who are not on the priority list if they have leftover doses at the end of the day. This is to make sure fewer shots go to waste.

Overall, Germany has now administered more than 35 million vaccine doses against coronavirus. Around 27.3 million were first doses and about 7.8 million for second jabs (as of Monday May 10th).