It's not like in The Bridge, where Saga Norén and Martin Rohde understand eachother flawlessly. Photo: Ola Torkelsson/TT

From my first trips to Copenhagen with my Swedish wife I realised something was amiss. She boldly embarked on long conversations with the Danes we met, even though to me it was apparent from the start that she had very little grasp of what was being said.

I’ve since frequently observed Danes in Malmö having to repeat themselves over and over again as their Swedish hosts blink uncomprehendingly at the elided syllables and glottal stops issuing from their mouths.

The situation in The Bridge, the Scandinavian thriller, comes nowhere close to reality.

There, you can watch Swedish detective Saga Norén and her Danish counterpart Martin Rohde gabble away in their own languages and yet somehow understand each other well enough to solve the crime.

But the truth is that, however much goodwill each side brings to the table, Swedish and Danish are only about 50 percent mutually intelligible.

According to a 2017 study by Charlotte Gooskens at Groningen University, Swedes listening to Danes in an intelligibility test got 56 percent of answers correct, while Danes listening to Swedes got only 44 percent right.

Other studies have found that Danes find Swedish easier than Swedes find Danish, which feels more likely given that Swedes speak their language largely as written while Danes swallow almost every word.

Whatever is the case, the two languages have about the same mutual intelligibility as Italian and Portuguese or Italian and Spanish, and they are considerably behind closer language pairs like Slovak and Polish, or Slovenian and Croatian.

So the sense I’ve always had that each side is only understanding half of what the other is saying is absolutely correct. There is no such language as “Scandinavian”. Swedish and Danish are very much different languages.

So why not just use English from the start? After all, everyone involved normally speaks it perfectly.

According to Gooskens, the reason is primarily cultural. “In a world of increasing globalisation, language is a very important way of stressing our common identity,” she told me. Attempting to speak “Scandinavian” is an expression that Swedes and Danes have something in common.

Moreover, she points out that the 50 percent mutual intelligibility is for Swedes and Danes with no previous exposure to each other’s languages.

With languages this close, it only takes a short course, or a relatively short period of time living in one another’s country, to boost mutual intelligibility dramatically, often to close to 100 percent.

One of the reasons Swedes often find Danish harder to understand than Danes find Swedish is that Danish frequently uses both the word used in Swedish and another alternative. Rum, for example, means “room” in both languages, but Danish also uses the word værelse, creating what Gooskens calls “asymmetrical intelligibility”. A Dane can always understand a Swede talking about their room, but a Swede can only understand a Dane when they use the right word.

Danes who’ve worked, studied, or lived in Sweden know instinctively which words to avoid, and are skilled at spelling out syllables they would swallow on the other side of the bridge.

Swedes who’ve worked, studied, or lived in Denmark (or older people from Sweden’s southernmost region Skåne who grew up watching Danish television), are on the other hand able to mentally fill in the syllables Danes miss out.

Gooskens believes that rather than give up and switch to English, Swedes and Danes should instead work more actively at learning to understand one another better.

“Even though Danes and Swedes may not understand each other well at first, I think that it takes very little effort to reach mutual understanding,” she said. “I think that it is worth the effort to bring young people into contact with each other and make them conscious about and positive towards the idea of communicating with their own Scandinavian languages.” 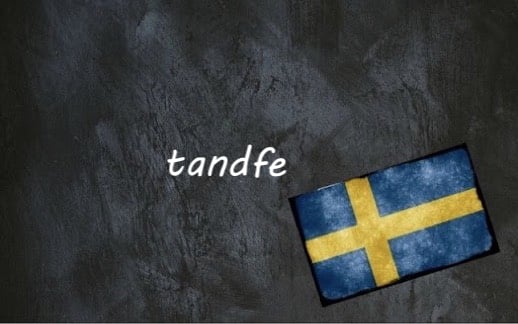 Tandfe means ‘tooth fairy’ in modern Swedish. Why mention the ‘modern’ bit? Well, because it didn’t always mean this.

In the folklore of various countries, the tooth fairy is a winged creature that replaces a lost milk tooth (usually placed under a pillow or in a glass of water) for a gift, most often a coin or a bill.

But this fairy is not even a fake fairy, it is a double fake, nothing but a mistranslation. Going back to pre-Christian times in Scandinavia, among the Norse peoples, a tannfé was a gift given to children when they lost their first tooth.

The Old Norse word tannfé, is made up of the two words tann, meaning ‘tooth’, and fé, which has the same root as the modern day Swedish fä, meaning animals that are kept for financial return, such as cattle. Fä comes from the older fæ or fé, meaning ‘property; wealth’. Often used to denote what was given to pay for something. In other words a ‘fee’.

So tandfe really means “tooth money” or a “tooth fee”. The confusion is of course with the French word fée or English ‘fay’.

This tradition of giving gifts for teeth is so old it even appears in Norse mythology, more specifically in the Poetic Edda, a collection of Old Norse narrative poems. There it is written that Álfheimr, home of the light elves and the god Frey (whose sister Freyja might be the reason why the fifth day of the week is called Friday), was gifted to the infant Frey as a tooth gift.

i tandgåva arla i tiden.

As translated by Björn Collinder. Notice, arla, in Collinder’s translation, like the milk company, means ‘early’ or ‘ere’ and has the same root. This is also where ‘yearly’ comes from, but the word in Old Norse is árdaga, meaning ‘in days of yore’. Let us attempt a translation in English:

was gifted in old days

by the Gods as a tooth fee.

This tradition itself is said to have come from the belief that children’s teeth offered protection or luck in battle, and that many Norse warriors wore them on necklaces.

Perhaps when your kids are old enough to not believe in the tooth fairy anymore, you can finally tell them the truth about this double fake fairy, and give them a piece of real mythology and history to replace it with.

Mommy, do you think the tooth fairy will come if I put my tooth under the pillow?

There is no tooth fairy!

UKRAINE
OPINION: This is Russia’s war, but we Europeans need to learn fast from our mistakes
Url copied to clipboard!