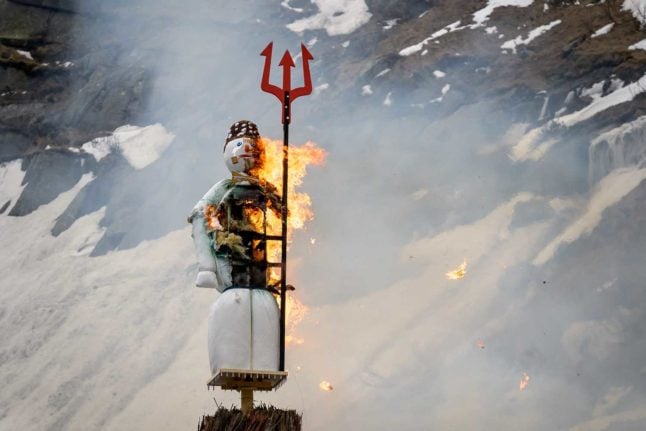 A giant snowman brandishing a pitchfork exploded in a blaze of fireworks atop a pyre on a snowy mountain pass named Devil’s Bridge on Monday, the first time the spring festival ceremony has been held outside the Swiss city of Zurich.

That the snowman effigy named Boeoegg blew up fairly quickly was taken to herald a “great summer” ahead, a positive outcome after last year’s festivities were cancelled due to the Covid-19 pandemic.

The burning of Boeoegg — the climax of Zurich’s traditional spring holiday Sechselaeuten — is normally held in the city centre, but coronavirus restrictions meant that was not possible this year.

Instead the snowman was sent 100 kilometres (60 miles) south of Zurich and installed on the famed Devil’s Bridge in Schoellenen Gorge, the site of dramatic battles between French and Russian troops in 1799 during the Napoleonic Wars.

Boeoegg — who represents the evils of winter — normally holds a broom, but given the bridge’s name, this year he was handed a pitchfork.

Local tradition says that the time between the lighting of Boeoegg’s pyre and the explosion of his fireworks-stuffed head predicts what the coming summer will be like.

This year it took a relatively speedy 12 minutes and 57 seconds, despite the improvised pyre being exposed to freezing cold and wind in the heart of the mountains.

While a decent time, it is still significantly more than the record of five minutes, 42 seconds recorded during a heatwave in 2003.

Boeoegg’s speedy demise prompted debate on local channel TeleZuri, broadcasting the event, with a spectator commenting: “I think it will be a great summer.” 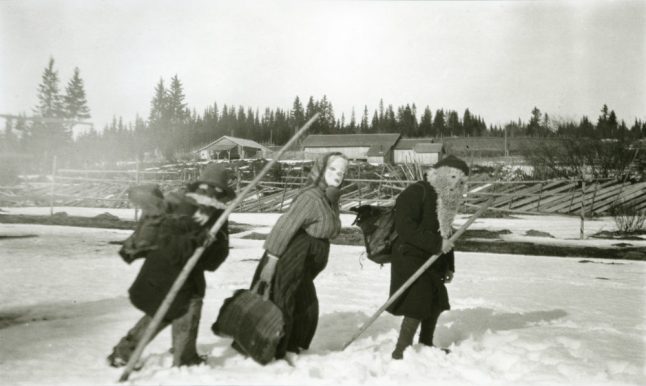 Yes, that's weird. Photo: Garaasen, Haakon / Anno Trysil Engerdal museum
From dressing up as a goat-like devil when you go out 'julebukking' to leaving porridge for your ill-tempered house spirit, Norway has certainly kept more pagan jul traditions than many other Christmas-celebrating countries.
Here are some of the country's weirder traditions.
Marzipan pigs Photo: Depositphotos
There's something gloriously bizarre about the prize traditionally given to whoever finds the almond Norwegian parents drop in the special Christmas porridge. And speaking of bizarre, last year two Norwegian artists took the tradition one step further by making a world-record marzipan pig, complete with a giant pile of marzipan poo.
Watching ancient Disney cartoons It's only in the Nordic countries that anyone knows who Ferdinand the Bull is. But that's because everyone has watched the exact same ten cartoons every Christmas Eve since 1953. Disney's 'Donald Duck og vennene hans', or 'Donald Duck and his Friends', goes out this Christmas on NRK at 3pm, as it has done every year for as long as anyone remembers. To those who aren't in on the joke, this is very odd indeed.
Trick-or-treating at Christmas
There's little difference between what Norwegians do when they går julebukk, and what the rest of the world does at Halloween. Children travel in costume from house to house, singing in exchange for sweets. If adults go too, they are ideally so well disguised as to be unrecognisable. They then drink a glass of akvavit at every house, ideally until they are incomprehensible.
By the way, if you think the adults who går julebukk today seem eery, it's nothing to what they looked like back in the day: Photo: AnneCN
When Norwegians sit down for their Christmas meal, it's either pork (julribbe) or lamb (pinnekjøtt) ribs for the main course. Not a turkey in sight.
Dancing around the Christmas tree Photo: Depositphotos
Foreigners who marry into Norwegian families can be disconcerted when asked to join hands and dance around the tree. The strangeness is only increased when accompanied by songs from God Jul, the 1967 album by Norwegian show band Dizzie Tunes.
Watching Tre Nøtter til Askepott Norwegians would feel their Christmas was incomplete without watching Tre Nøtter til Askepott, or Three Hazelnuts for Cinderella, an East German-Czechoslovak adventure film from the early 1970s. If anything this is even weirder than the cartoons.
Making terrible attempts to play Santa Photo: Depositphotos
At Norwegian Christmas celebrations, Santa Claus, or julenissen, actually turns up. How can Norwegian children believe in Father Christmas when they get to meet him face-to-face? After popping out “to get the paper”, a parent or other relative returns with a fake beard and some kind of heavy coat and hat. Few children are deceived.
Going overboard on julekjeks Photo: wizzer2801/Creative Commons
According to some traditions, Norwegians are supposed to bake no fewer than seven varieties of biscuit in the weeks leading up to Christmas Eve. Indeed, so important is the pre-Christmas bake, that Norwegians have even spurred butter shortages from their hoarding.
Leaving porridge out for the nisse Photo: Depositphotos
If the nisse, a sort of gnome-like guardian spirit who lives in Norwegian barns, doesn't get porridge left out for him with big dollop of butter on top, Norwegians believe he will wreak vengeance by playing mean tricks such as tying cows' tails together. It's a much more serious matter than leaving a glass of sherry for Father Christmas.
READ ALSO: World's biggest pooping marzipan pig? It must be Christmas in Norway
Url copied to clipboard!