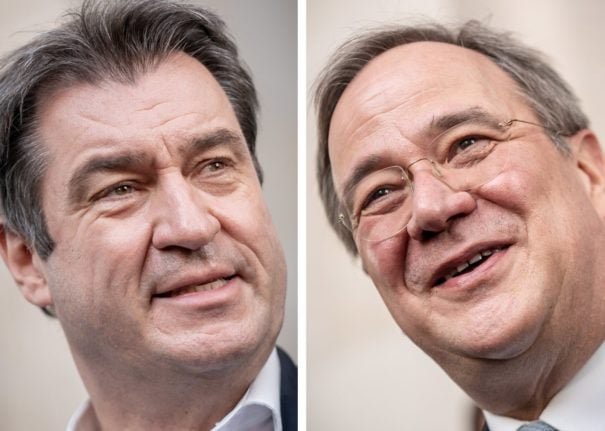 Merkel, who is still immensely popular with voters, is stepping down this year after 16 years in power.

As head of the Christian Democratic Union, affable Merkel loyalist Armin Laschet would normally be the obvious choice to lead the party and the CSU, its smaller Bavarian sister party, into the election as their chancellor candidate.

But with support for the parties plumbing new depths amid anger over Germany’s pandemic management, Laschet has faced calls to step aside in favour of the better-liked Bavarian premier Markus Söder.

Here’s a look at the two men grasping for a chance at Merkel’s throne, with a decision on the candidate expected as early as this week.

Elected as head of the CDU in January, 60-year-old Laschet has since faced a series of setbacks including a damaging spat with Merkel over viruscontainment measures.

In a recent survey commissioned by business daily Handelsblatt, just 12 percent of Germans said they thought he would be a good chancellor candidate.

But coming back from behind has always been a speciality for Laschet, who has an uncanny ability to “sit out his opponents”, as Der Spiegel news magazine observed.

READ ALSO: Germany after Merkel: Does the new CDU leader have what it takes to be a future chancellor?

“He does not aim for a quick knockout, but wears down his opponents slowly, continuously, with great endurance,” the magazine noted.

A defender of multiculturalism and self-declared “passionate European”, Laschet famously stood by Merkel during the fallout from her decision to leave the border open to hundreds of thousands of asylum seekers in 2015-16.

Born in Aachen, the spa city in western Germany near the border with Belgium and the Netherlands, he has a reputation for pragmatism and an ability to unify.

The father of three is a great fan of Charlemagne, the king of the Franks credited with uniting Europe whose empire was based in Aachen, and his family has even said they are direct descendants.

But Laschet also plays up his common man image, telling party members in January how his father fed his family digging for coal.

“When you’re down in the mine, it doesn’t matter where your colleague comes from, what his religion is or what he looks like. What is important is, can you rely on him,” he said.

Laschet studied law and political science in Munich and Bonn before working as a journalist for Bavarian radio stations and television, and as the editor of a Catholic newspaper.

He was elected to the Bundestag, or lower house of the German parliament, in 1994 and to the European Parliament in 1999, and has been the state premier of North Rhine-Westphalia since 2017.

With his brash posturing and a playful penchant for dressing up as Marilyn Monroe or Shrek, Bavarian leader Söder would not seem the obvious choice to inherit Merkel’s mantle.

But behind his rakish charm and passionate Star Trek fandom, there is molten ambition.

If he were to win the election, the 54-year-old would be Germany’s first-ever chancellor from the CSU, after two failed attempts by previous party leaders, bringing a dash of southern eccentricity to the often staid world of Berlin power politics.

While Laschet has faced criticism over his flip-flopping approach to virus restrictions, Söder has steadfastly advocated a hard line, marching in lockstep with Merkel.

The strategy has served him well, with one recent poll naming him as Germany’s most popular politician — outpacing even Merkel.

But Söder, a former television journalist with a flair for showmanship, has not always seen solidarity with Merkel as being to his political advantage.

The trained lawyer has long had the reputation of a cunning political operator, skilled in exploiting the vulnerabilities of his opponents.

After Merkel came under fire during the refugee influx in 2015-16, particularly from the far right, Söder vocally distanced himself from her welcoming stance — something Laschet said would come back to haunt the Bavarian if he stood as chancellor.

Söder has been a fixture of his state’s politics for a quarter century, serving first in the state parliament before becoming CSU general secretary, a state minister and then successor to current federal interior minister Horst Seehofer as party chief and state premier.

As a Protestant from the Franconia region, Söder was something of an upstart for the traditionally Catholic party. He grew up in Nuremberg as the son of a couple who ran a small construction company.

He famously hung a giant poster in his attic bedroom as a teen of Bavaria’s larger-than-life arch-conservative premier Franz Josef Strauss, whom Söder called a “titan”.

His political rise was fuelled by media savvy pointed up by his extravagant carnival season costumes, with Shrek, Monroe and Homer Simpson among the highlights.