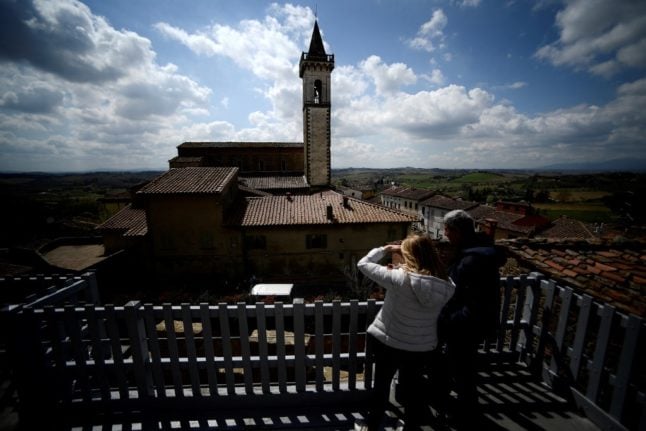 The village of Vinci in Tuscany. Photo: Filippo Monteforte/AFP

The island of Sardinia, Italy’s only low-risk ‘white zone’ under minimal restrictions, has barred visitors from travelling to second homes unless they have an urgent, essential reason to do so.

With the Easter break approaching, it’s one of several parts of Italy taking action to make it harder for people to retreat from cities under lockdown to second homes in areas where infection rates are lower.

A regional ordinance signed on Wednesday night decrees that non-residents can only travel to Sardinia – which has an estimated 300,000 holiday houses – for work or emergencies, not to reach a second home. The ban applies from March 18th until at least April 6th, the end of the Easter weekend.

Similar bans are already in place in Valle D’Aosta and the autonomous province of Bolzano (Alto Adige/South Tyrol).

While most non-essential travel between regions is forbidden under Italy’s nationwide emergency rules, an exception allows people who have a second home to cross regional borders to get there, so long as they owned or rented it before January 14th 2021 and no one else already lives there.

But with Italy in the middle of a new wave of coronavirus infections and most of the country under tight restrictions, many coastal and rural areas fear an influx of second-home owners looking to escape cities where rules are strictest and infections highest.

“Don’t come to your second homes: help us to get the pandemic under control, for everyone’s sake,” wrote the mayors of 16 towns on the coast of Tuscany in a recent joint appeal to the public.

“Tourism and hospitality are fundamental for us, but right now they can’t be guaranteed,” the mayors said, expressing fear that health services already under strain wouldn’t be able to cope with extra pressure. “We’ll wait for second-home owners with open arms, but for now we’re asking for a gesture of love and responsibility.”

The governor of Tuscany, Eugenio Giani, has pledged to introduce new measures limiting visits to second homes in the region at weekends and over Easter. Earlier this year he tried to bar any property owners who weren’t registered with a doctor in Tuscany, but a regional court overturned the ban.

There may be other legal challenges to regions’ restrictions on visiting second homes, since the decision to curtail free movement is supposed to rest with Italy’s national government, not regional powers.

Campania, for instance, has forbidden its own residents from visiting their second homes within the region, but stopped short of trying to ban holiday-home owners entering from other parts of Italy.

Meanwhile Sicily requires anyone entering from another region to test negative for coronavirus or face quarantine.

Sardinia, too, imposed a negative test requirement earlier this month, though there were reports of ferry travellers flouting the rule en masse amid chaos at the island’s main ports.

One of Sardinia’s outlying islands, Sant’Antioco, went further and decreed this week that anyone arriving from elsewhere in Italy or overseas has to spend ten days in isolation, even after testing negative. The only exception is for people who have had both shots of a Covid-19 vaccine.

Enforcing the new restrictions remains the biggest challenge. Sardinia has ordered ferry companies and airlines to verify passengers’ justification for travelling before they board, as well as calling in forest rangers to help check paperwork.

Any regional restrictions come on top of Italy’s international travel rules, which bar tourists from most countries outside the European Union and require EU visitors to present a recent negative Covid test.

Sardinia saw several outbreaks of coronavirus last summer as Italy relaxed its first lockdown and Italian and European tourists flocked to the island’s beaches. Even now, with overall infection rates the lowest in Italy, some towns are under local lockdown in a bid to contain new clusters.