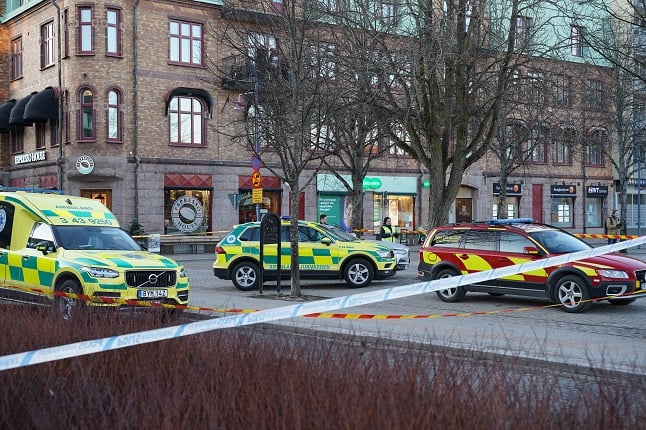 Emergency service vehicles near the scene of the crime on Wednesday afternoon. Photo: Carl Carlert/TT

This article is out of date. As of Thursday morning police are no longer investigating possible terror motives. Read more here.

A man attacked a number of people with a weapon and was later taken into custody after being shot and wounded by police officers in the southern city of Vetlanda, police confirmed on Wednesday afternoon. Police initially said eight people had been injured, but later revised the figure to seven.

The crime is currently classified as attempted murder but police later said they were investigating possible terror motives, clarifying a previous statement that said the crime had been re-classified as suspected terrorism.

“We are investigating whether there is any terror motive. We are working closely with security police on this,” said local police chief Malena Grann.

Police have not confirmed the type of weapon used in the attack.

They did not have further details on the condition of the eight injured people, nor whether any foreign citizens were among them, but all eight were being treated in hospital. Police said it was “too early in the investigation” to say if there was any reason the victims had been targeted or if the attack was random.

The suspect was described by police as being in his 20s, and the state of his injuries as “unclear” but not judged to be life-threatening. He was being treated at hospital under police observation and questioning had not yet started.

Police said the suspect was previously known to police for “minor crimes” and lived in Småland.

The Local asked police what the next step in the investigation was.

“We are working intensively and will have lots of resources going forward. We would also really like to come into contact with anyone who has information on the incident. That is also one reason why we cannot come out with a lot of details at the moment,” local police chief Malena Grann told The Local during a press conference on Wednesday evening. Anyone with relevant information can contact the police by calling 114 14.

At 6.47pm police announced that they were investigating whether the attack was motivated by terrorism.

Questioned by Göteborgs Posten on why the incident was suspected as terrorism, police said: “There are details in the investigation that lead us to investigate a possible terror motive, but I cannot give further information.”

They said there was no indication of further suspects being involved in the incident, and that the situation at the scene in Vetlanda was “under control”.

Sweden’s national terror threat level is currently at three on a scale of one to five. At the press conference, police said they had had no previous information that such an incident was likely in Vetlanda but said the threat level “indicates that something of this kind could happen in Sweden”.

Five areas of the town, located in the centre several hundred metres apart, have been identified as crime scenes and cordoned off in connection with the investigation.

Prime Minister Stefan Löfven condemned the attack, saying in a comment: “We will respond to these appalling actions with the collective force of society. We are reminded of how fragile our secure existence is. I want to ask everyone to send their thoughts to those affected by the violence and to the men and women working in healthcare, police and in the municipality who are caring for the injured and re-establishing security.”

Vetlanda is a town in Jönköping, southern Sweden, located around 275 kilometres southwest of Stockholm and home to around 14,000 inhabitants.