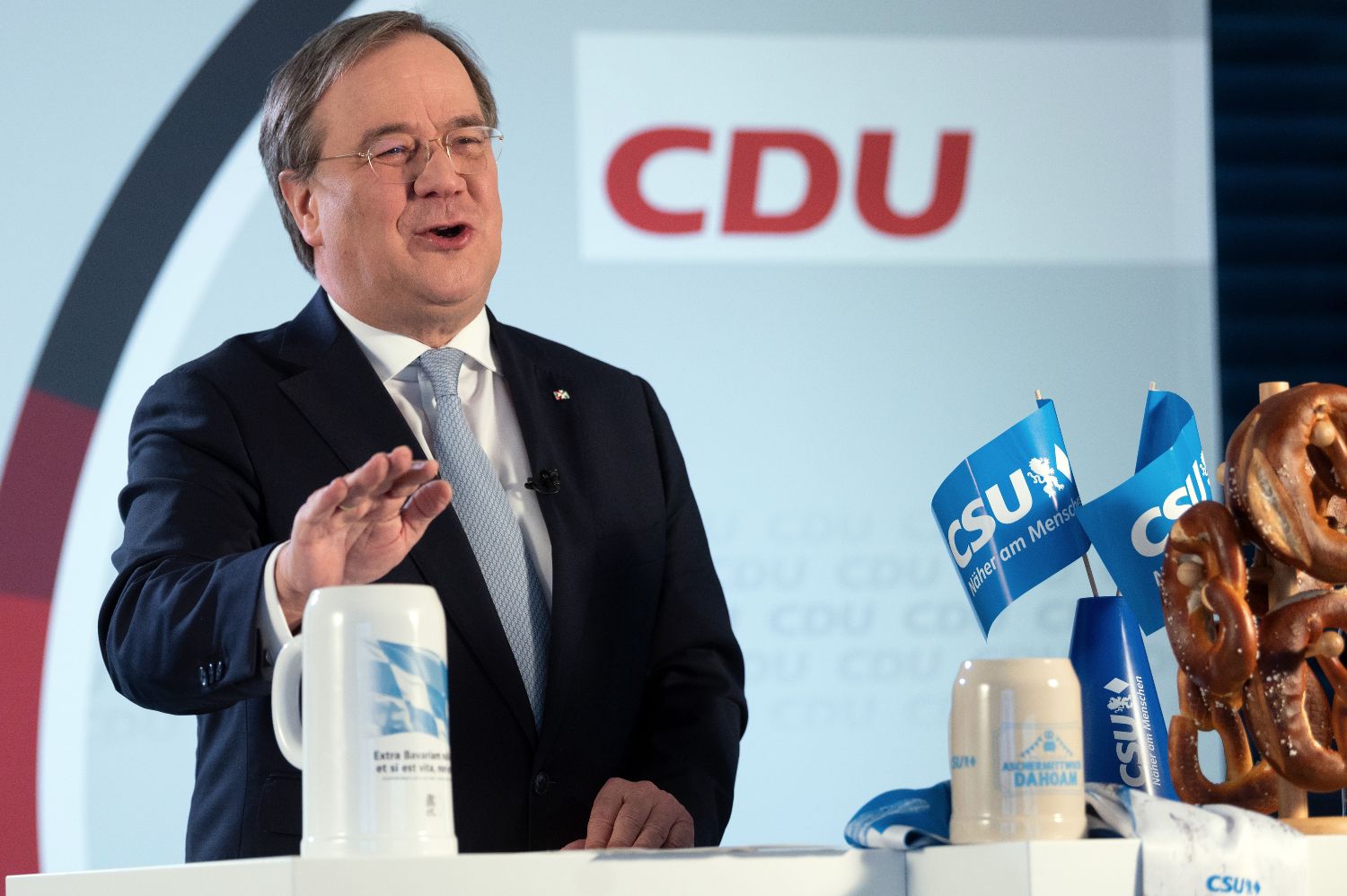 Laschet won the CDU leadership race in January on a promise to continue Merkel's moderate course when she retires this year, but is still struggling in public opinion polls seven months ahead of a general election.

With two crucial state elections looming in mid-March, Laschet this week laid into the Merkel government's coronavirus strategy, urging it not to “treat citizens like helpless children”.

But the comments have left the political centrist from Aachen, who turns 60 on Thursday, accused of flip-flopping and pandering to populists.

But they agreed that some measures could be relaxed once the incidence rate falls to 35 new cases per 100,000 residents over a seven-day period.

The government had earlier set an incidence target of 50 but revised it downward due to concerns over more contagious virus variants.

“You can't keep inventing new limits as a way of preventing life from happening again,” railed Laschet on Monday during a CDU meeting in Baden-Württemberg — one of the two states holding elections in March.

“There still seems to be this popular attitude of 'ban everything, be strict, treat citizens like helpless children'.”

Germany's Bild daily, long a vocal critic of the government's coronavirus policy, lauded Laschet for merely “saying out loud what many people are thinking”.

But others pointed out that, as the head of Germany's most populous state of North Rhine-Westphalia, Laschet had himself attended last week's meeting and signed off on the new threshold.

READ ALSO: Who is the new head of Germany's conservative CDU party?

The incidence rate for the whole of Germany was hovering at around 57 on Wednesday and had fallen below 50 in three states, including the capital Berlin.

Parts of the CDU have been crying out for a return to normality, urging the government to take into account not just the incidence rate but other factors such as the number of Covid-19 patients in hospital.

But Laschet's comments have given ammunition to his opponents, especially the centre-left Social Democrats (SPD), currently in coalition with the CDU but becoming increasingly combative as the election draws near. 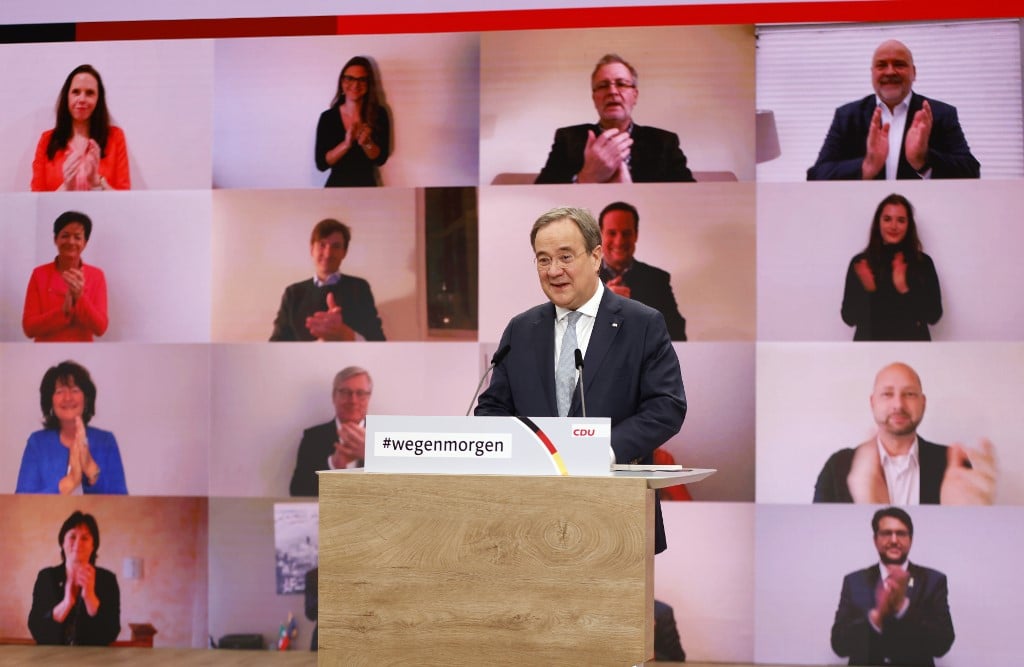 North Rhine-Westphalia's State Premier Armin Laschet delivers a speech after being elected as CDU leader at a digital congress in Berlin on January 16th. Photo: AFP

There was criticism too from the Green party, seen as a potential new coalition partner for the CDU in Germany's next government.

The CDU has seen its popularity slip in recent opinion polls, hurt by increasing public frustration with the government's recent handling of the pandemic.

But this is largely down to “the chaos of the vaccination campaign, rather than disaffection with the lockdown”, according to political scientist Oskar Niedermayer at Berlin's Free University.

Laschet's comments are a “mistake”, he told AFP: “This U-turn reinforces his image as a politician without a clear line of conduct in crisis management.”

Laschet has come under fire before over his handling of the pandemic in North Rhine-Westphalia.

During the first wave last year, he pushed aggressively for the loosening of restrictions — only to backtrack after a huge outbreak at a slaughterhouse.

The question of who will lead Germany's conservatives to the polls will be decided in the spring, with Laschet up against Markus Söder, the head of the CDU's sister party in Bavaria.

Söder has repeatedly taken a hard line when it comes to virus measures and did so again on Wednesday, citing the incidence rate of 35 as a firm marker.

He also seized the moment to tweet a photo featuring books on the architecture of the chancellery and the art of governing.

Some operators from Berlin’s club scene are bracing themselves for a difficult autumn. For months now, people have been allowed to dance again and life has returned to normal in the dark corners of Berlin’s famous nightlife scene.

But the clubs have far from recovered from the pandemic. They face staff shortages, rising prices and the prospect of a return to Covid restrictions in the autumn.

“We go into the autumn with huge fear, because the omens are totally unfavorable,” said association head Pamela Schobeß.

Spring and summer went anything but smoothly, she said. “There has been an oversupply of events. People aren’t going out as much, and some are still afraid to move around indoors.”

Money is also an issue. “A lot of people are afraid of rising energy prices.”

The industry lost workers during the pandemic and it’s hard to convince them to come back with the outlook for the autumn looking so gloomy, Schobeß says.

Her colleague Robin Schellenberg tells a similar story. People have switched to various other jobs and would even rather work on a supermarket checkout, which may have been considered less sexy in the past. Now, he says, some have learned to love not having to work nights.

Schellenberg runs the Klunkerkranich, a small club on a parking garage deck in Neukölln. Because a number of things have become more expensive, they have also had to increase their admission prices.

His impression is that people are going out less often and are deciding more spontaneously. In addition, people in the neighborhood are now more sensitive to noise. “Many people found the silence very enticing,” he said.

Some in the industry wonder what will happen next. Will club admission have to become much more expensive? Will that exclude people who can no longer afford it? And what happens if Covid infection numbers rise sharply?

If masks become mandatory indoors in October, Schobeß believes that would be bad for the clubs. “Even if we don’t get shut down by the state, we’ll actually have to close down independently ourselves,” she reckons.

Masks take all the joy out of the experience, she says. People have drinks in their hands and are “jumping around and dancing” and then security guards have to tell them “please put your mask on.”

The federal government is considering whether states should be able to make masks mandatory indoors starting in October. Exceptions should be possible, such as at cultural and sporting events, for people who have been tested, recently vaccinated and recently recovered.

In the event that Covid numbers soar, the states could then be allowed to tighten the rules and eliminate all exemptions.