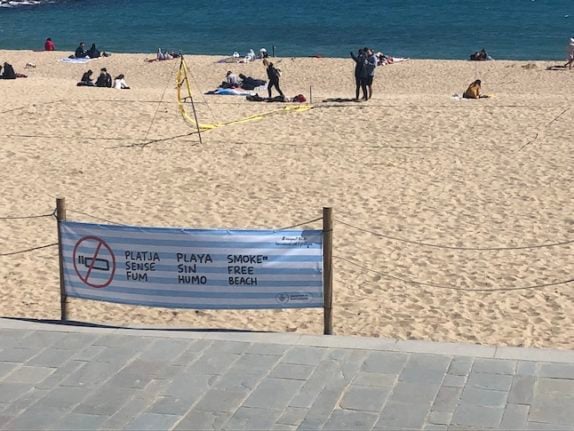 Barcelona recently announced that it will ban smoking on all of its 10 city beaches from July this year. This means there will be a total of five kilometres of smoke-free sand in Spain’s second-largest city. Last year, Barcelona decided to ban smoking on four of its main beaches between May 29th and September 12th as a trial run, and this year has extended the ban all year round to all its beaches, due to the success.

Many in Barcelona have praised the move, while many others have taken to social media to express their anger at the rule.

As well as being horrible to find between your toes when sunbathing or when your kids are building a sandcastle, cigarette butts are harmful to the environment and marine life.

A discarded cigarette butt is made of over 97 percent cellulose acetate and contains 4,000+ chemical toxins.

But, discarded cigarette butts are just half the issue, the other problem is the smoke, which on Spain’s crowded beaches can affect the health and well-being of many others around.

Barcelona is of course not the only Spanish city to have banned smoking on its public beaches. We take a look at which other beaches across the country have put a stop to it.

Besides the 10 beaches in Barcelona, many of Catalonia’s beaches have banned smoking, all the way up to the Costa Brava. In fact, Catalonia became the first region to designate a ‘smoke-free’ beach when the town of L’Escala introduced the rule back in 2006. Since then, it has been extended to a total of 19 beaches in the region, these include Sant Feliu, Sant Pol, Canyerets in Sant Feliu de Guíxols, Playa de Ocata in El Masnou, Playa de Sa Boadella, Canyelles, Treumal and Fenals in Lloret de Mar, and Playa de L’Escala.

The region of Galicia has the most smoke-free beaches in Spain, with a whopping 187 ocean and river beaches imposing the ban. These include 70 beaches in the province of A Coruña, 32 in Lugo, 12 in Ourense and 73 in Pontevedra.

Some of the most popular and well-known beaches that are free from tobacco include Santa Cristina in Oleiros, A Rapadoira in Foz, and Silgar in Sanxenxo.

Canary Islands
Gran Canaria is the main island in the Canaries that has introduced smoking bans on its beaches. Across the islands there are currently 41 smoke-free beaches. The municipality of Mogán introduced new rules, along with fines of up to €1800 for discarding cigarette butts on the sand and €450 for anyone caught smoking. These include Playa de Mogán, Anfi, Puerto Rico, Amadores, and Las Marañuelas in Arguineguin.
Murcia
Murcia currently has a total of 12 smoke-free beaches. These include El Rihuete, Playa de Bahía, Playa Reya, Nares and El Castellar in Mazarrón; Playa Villananitos in San Pedro del Pinatar; Playa del Pescador and the main beach in Santiago de la Ribera, Playa Mistral in La Manga, Playa de La Concha in Los Alcázares; la Cala de las Higuericas Águilas; and Playa La Chapineta in La Azohía.
Andalusia
There are now 48 beaches across Andalusia which have introduced the ban. These include Vera in Almería, Motril and Algarrobo, as well Playa de la Rada Estepona, Vélez-Málaga, Lagos, Mezquitilla, Caleta, Torre del Mar, Almayate, Valle Nizas and Benajarafe in the province of  Málaga.
El Chorillo in Conil de la Frontera, El Palmar in Vejer also have smoking bans, as do the beaches in and around Tarifa including Playa Chica, Atlanterra, Valdevaqueros, Playa de los Lances and Bolonia.
Playita de Arroyomolinos in Zahara de la Sierra, Santa Bárbara in La Línea, El Carmen de Barbate and de Zahara de Atunes in the provincia de Cádiz have also banned smoking.
Asturias

Balearic Islands
The Balearic Islands have around 12 smoke-free beaches between the islands. On Mallorca you can enjoy the fresh air on Cala Estancia, Cala Anguila, Cala Deià, Colonia de Sant Pere, Cala Millor, Sant and Joan in Alcudia.
In Ibiza, smoke-free beaches include Playa de Santa Eulalia del Río and Playa de Talamanca, while in Menorca you can head to Binissafúller or Platja Gran. And finally on Formentera, there’s Playa Es Pujols. 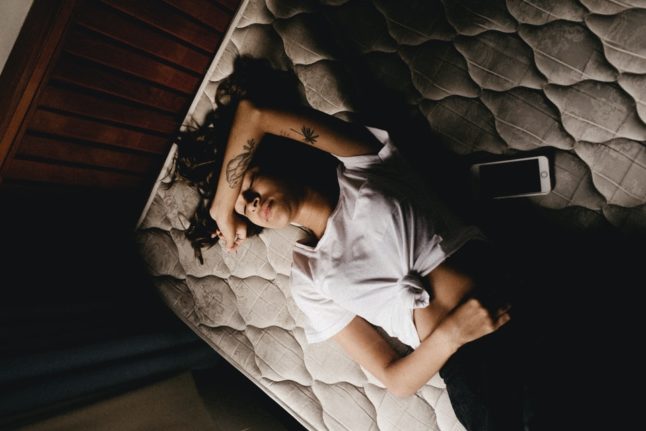 After months of negotiations within the government, the Ministry of Equality is satisfied with the preliminary draft reform of the abortion law, although outstanding measures have been left out along the way, such as the reduction of VAT on pads and tampons.

Spain’s Minister of Equality Irene Montero explained that the draft represents a modification of the one approved by the Government of José Luis Rodríguez Zapatero in 2010, which already had “very solid pillars”, after the “setbacks” that occurred under Mariano Rajoy’s government.

The proposed legislation must still be approved by parliament, with a vote not expected for months, but if approved here’s what will change.

Previously, it was necessary for those aged 16 and 17 who wanted an abortion to get consent from their parents, but this new law means that no permission will be necessary. Women who undergo an abortion will have the right to disability leave and specialised support in cases of terminated pregnancy.

The new law guarantees that abortion will be available in the public health sector if it is needed in an emergency and also places special emphasis on the proximity of women’s homes to health centres, so that they won’t have to travel far to get one.

Many times women end up in private clinics because the public hospitals refuse them. In addition, women will be able to choose between surgical and pharmacological abortion, both of which must be available in all centres.

In Spain, of the 88,269 voluntary terminations of pregnancy reported in 2020, the latest available data showed that 84.5 percent were performed in private centres. Twelve provinces have not reported any abortion in the last five years, not even in private clinics.

The law assures that conscientious objectors have a right not to perform abortions and will be regulated in the same way as in the Euthanasia Law. It will guarantee that there will always be personnel available to form voluntary abortions. Any health professional either working in the private or public sectors can declare themselves to be a conscientious objector.

The three mandatory reflection days will be eliminated

The new draft bill eliminates the need to take three days of reflection before terminating a pregnancy, which has been mandatory up until now. The law also states that information on alternatives will be provided and help in the case that the woman decides to continue with her pregnancy and requests it.

For the first time, the law will include a specific section on periods, allowing time off work for women who suffer from extremely painful and disabling periods, which will be financed 100 percent by the State.

Good practices will be promoted in all stages of pregnancy, especially in childbirth and postpartum. Prepartum leave will be incorporated from the 39th week of pregnancy, which will be taken away from maternity leave.

In high schools, prisons, women’s centres, civic centres, social centres and public bodies, products such as tampons, pads or menstrual cups will be distributed free of charge with the aim of ending menstrual poverty.

Free distribution of the pill and methods of male contraception

The new law also indicates that there will be free distribution of the morning-after pill in health centres, as well as in sexual and reproductive health institutions.

Currently, this emergency contraceptive can be bought without a prescription in pharmacies at a price of around €20, although some Spanish regions already provide it for free in health centres. The new law proposes that the pill must be available in all pharmacies. Male contraceptive methods will also be promoted, so that it will not only be the responsibility of the woman.

The law states that sex education must be mandatory in schools. Teachers will be trained in sexual and menstrual education, as will prison officers and public workers.

Free contraceptive methods will also be distributed in educational centres linked to campaigns on sexual education (something that will also be done in social centres and prisons). There will also be public centres for sexual and reproductive health and a hotline will be created.