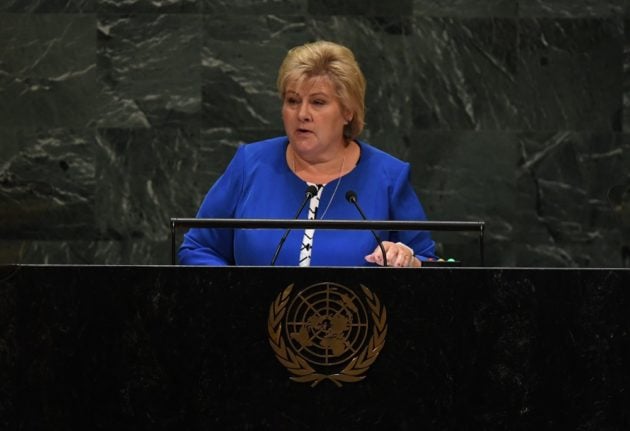 Some 51 states around the world have backed the Treaty on the Prohibition of Nuclear Weapons, which calls for the ban of “nuclear weapons or other nuclear explosive devices”, according to the United Nations Office for Disarmament Affairs.

The treaty includes a ban on “developing, testing, producing, acquiring, possessing, stockpiling, use or threatening to use nuclear weapons.”

And with over 50 ratifications, the treaty is finally due to come into force on Friday.

It was adopted by the UN General Assembly in July of 2017, with the approval of 122 countries.

Norway, however, was not among them.

And in those three years, little has rocked Prime Minister Erna Solberg and the government’s belief that joining the treaty is the wrong course for the Nordic country.

“We will not support a proposal that would weaken NATO,” PM Solberg said in a 2017-interview to broadcaster NRK.

She argued that until nuclear powers themselves commit to abolish nuclear weapons, joining the treaty was pointless.

Norway’s position was confirmed in March 2019, when Parliament voted against committing the country to the treaty.

The choice has received widespread criticism from among others the President of Red Cross Norway, General Robert Mood.

“We have a much larger room to manoeuvre within NATO than we are currently utilising,” Mood wrote in an opinion piece in Aftenposten in September 2020.

He argues that nuclear weapons pose a significant threat to global peace and security. He also points out that six former Norwegian Prime Ministers and Foreign Ministers are among the 56 world leaders who have petitioned world governments to ratify the Nuclear Ban-Treaty in an open letter by the International Campaign to Abolish Nuclear Weapons (ICAN).

ICAN was key in the development of the Nuclear Ban-Treaty, and was awarded the Nobel Peace Prize for its efforts in 2017. In order to put pressure on national governments to join the treaty, ICAN also launched their Cities Appeal-initiative. Over 40 Norwegian cities and municipalities have joined the appeal, including Oslo, Bergen and Trondheim.

Yet Norway’s position continues to be staunchly in-line with that of NATO, which recently emphasised its opposition to the treaty.

The treaty “does not reflect the increasingly challenging international security environment and is at odds with the existing non-proliferation and disarmament architecture,” the security alliance wrote in a December statement.

The ban treaty “lacks any rigorous or clear mechanisms for verification, and has not been signed by any state that possesses nuclear weapons, and thus will not result in the elimination of a single nuclear weapon,” NATO continued.

Norway’s government also reviewed the consequences of joining the treaty in 2018. It concluded that the alliance could be weakened if member countries started committing to the ban-treaty.

“This would primarily serve the interests of countries that pose a security threat to Norway and other NATO members,” it stated.

Norway is not the only Nordic country hesitant to join the treaty. In fact, neither Sweden, Denmark, Finland or Iceland support an internationally binding ban.

For Sweden, this has come as a surprise as it was among the countries that voted in favour of the treaty in the UN General Assembly in 2017. The country is furthermore not a member of NATO.

Yet the country has also highlighted that the nuclear ban treaty lacks clear definitions regarding which weapons it covers.

“I would have wished we had a convention that is possible to sign, but you also have to be a realist,” Sweden’s then-Foreign Minister Margot Wallström said about the ban-treaty in 2019.

Conflict with the Non-Proliferation Treaty

Wallström and NATO have also pointed out that it is unclear how the new treaty will relate to the Treaty on the Non-Proliferation of Nuclear Weapons (NPT), which aims to prevent the spread of nuclear weapons. The treaty entered into force in 1970 and has a total of 191 state parties, according to the UN Office for Disarmament Affairs.

In a parliamentary Q&A session in November last year, Norway’s Foreign Minister Ine Eriksen Søreide also stressed that Norway is committed to the NPT and wants to focus national efforts on preventing development and proliferation of nuclear weapons.

“It is a priority for Norway to shield this important treaty, which for the past 50 years has contributed to international security,” the Foreign Minister stated.

After a bilateral meeting with Magdalena Andersson on the security situation in Europe, Guterres warned that Russia’s invasion of Ukraine could lead to a global food crisis that would hurt some of the world’s most vulnerable people.

“It is causing immense suffering, destruction and devastation of the country. But it also inflames a three-dimensional global crisis in food, energy and finance that is pummelling the most vulnerable people, countries and economies,” the Portuguese diplomat told a joint press conference with Andersson.

He stressed the need for “quick and decisive action to ensure a steady flow of food and energy,” including “lifting export restrictions, allocating surpluses and reserves to vulnerable populations and addressing food price increases to calm market volatility.”

Between the two, Russia and Ukraine produce around 30 percent of the global wheat supply.

Guterres was in Stockholm to take part in the Stockholm 50+ conference, which celebrates the 50th anniversary of the United Nations Conference on the Human Environment.

The conference, which was held on the suggestion of the Swedish government in 1972 was the first UN meeting to discuss human impacts on the global environment, and led to the establishment of the UN Environment Program (UNEP).

At the joint press conference, Andersson said that discussions continued between Sweden and Turkey over the country’s continuing opposition to Sweden’s application to join the Nato security alliance.

“We have held discussions with Turkey and I’m looking forward to continuing the constructive meetings with Turkey in the near future,” she said, while refusing to go into detail on Turkey’s demands.

“We are going to take the demands which have been made of Sweden directly with them, and the same goes for any misunderstandings which have arisen,” she said.

At the press conference, Guterres condemned the Russian invasion of Ukraine as “a violation of its territorial integrity and a violation of the UN Charter”.