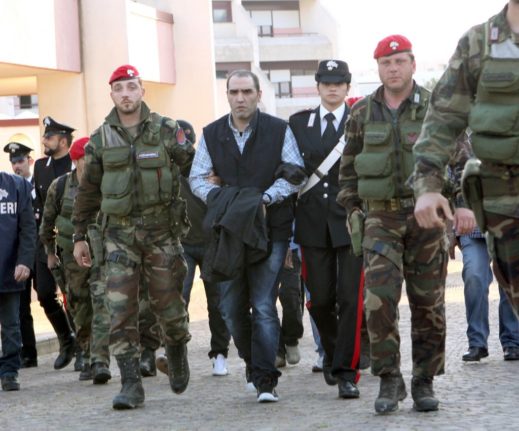 When the mafia is mentioned, many people outside Italy will immediately think of Sicily's notorious Cosa Nostra.

But Italy in fact has five major mafias, and in recent years other groups have become increasingly powerful – across Italy and beyond.

The 'Ndrangheta, rooted in the southern region of Calabria, has surpassed the more famous Cosa Nostra to become Italy's most powerful mafia group, operating across the world.

The 'maxi-trial' now taking place in the groups heartland in Calabria, which has more than 350 defendants, concerns just one 'clan' or crime family within the wider 'Ndrangheta organisation. 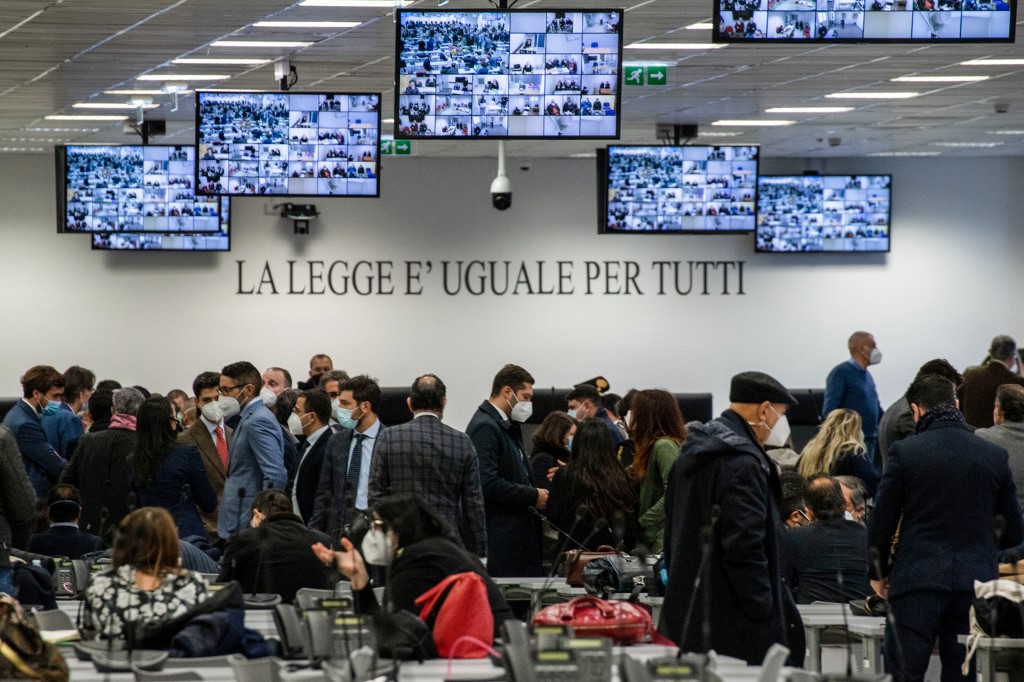 Inside the specially-designed courtroom in Calabria as the maxi-trial began on January 11, 2021. Photo: Gianluca Chininea/AFP

Criminologist Anna Sergi, of the University of Essex in England, says the group's name has Greek origins – the word “andranghateia” refers to a “feat
of bravery”, and “andrangatho” means “to do military actions”.

The group has only been classed as mafia under Italian law since 2010, but it dates back at least to the unification of Italy in 1861.

It came to public prominence in the 1980s and 1990s in a series of kidnappings across Italy, and affiliates are believed to have been responsible for kidnapping oil tycoon John Paul Getty's grandson.

Judge Roberto Di Bella, who has almost 30 years of experience in the methods of the Calabrian mob, describes the 'Ndrangheta as “perhaps the most
powerful criminal organisation in the world, but certainly the most diffuse, and present on five continents”.

Its activities have expanded well beyond those typical of organised crime groups – drug trafficking, extortion, illegal waste trafficking and money
laundering – to infiltrate practically all areas of public life in Calabria, while using shell companies to invest in the legitimate economy worldwide.

But what makes the 'Ndrangheta different from other mafia groups is its family structure – it is based on blood ties, rather than external recruitment based on merit, which makes it “very reliable, because there are few turncoats”, Di Bella told AFP.

This is one of the reasons why Colombian or Mexican drugs producers have used the 'Ndrangheta to sell in Europe.

“The enormous flow of money that comes from drugs allows the 'Ndrangheta to buy everything – businesses, restaurants – to pollute the economy not just
of Italy but of many other countries in the world,” he said. 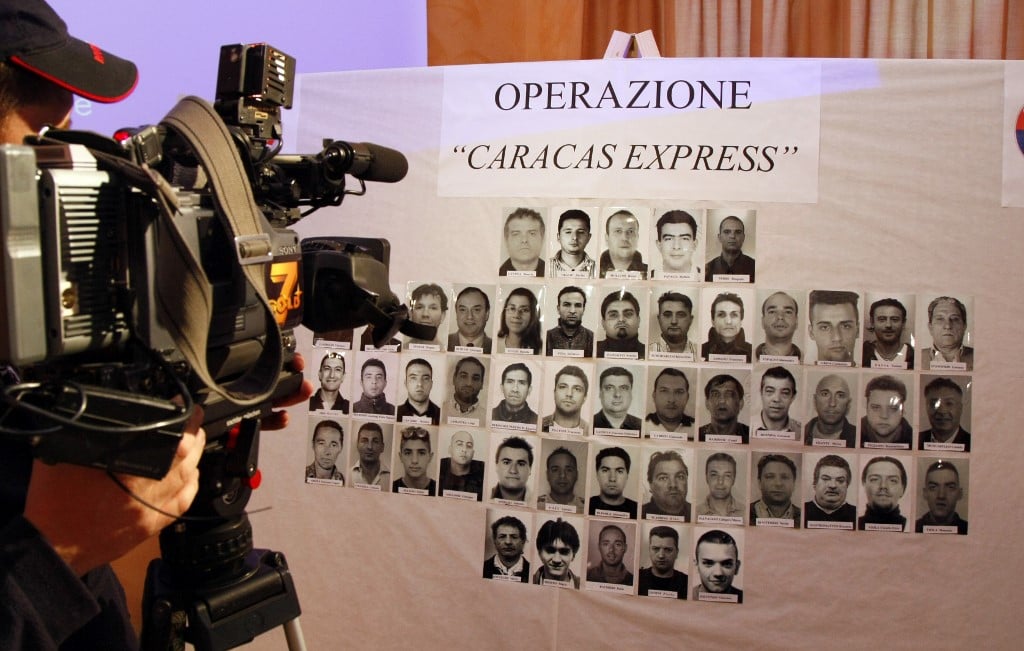 Police in Milan display photos of suspected cocaine traffickers, some with links to the 'Ndrangheta mafia, in 2009. File photo: AFP

Scale
Authorities believe there are some 150 'Ndrangheta families in Calabria and at least 6,000 members and affiliates in the region. That swells to thousands more when including those worldwide, although estimates are unreliable.
The organised crime group generates more than 50 billion euros ($61 billion) per year, according to Gratteri, who called it the world's richest such organisation.
Nicola Gratteri, the leading prosecutor at the maxi-trial in Calabria, explained that the 'Ndrangheta as a network of families, each of which wield power over subordinates.

“I have to start with the idea that there's an organisation, as in a business, as in a large multinational, with a boss and then down, like a pyramid, to all the other members,” Gratteri told AFP, explaining the need for the “maxi-trial”.

The current trial focuses on just one family, the Mancuso group, and its network of associates who control the Vibo Valentia area of Calabria.

How much is it worth?

The 'Ndrangheta's true make-up and wealth are difficult to establish but authorities believe there are some 150 'Ndrangheta families in Calabria and at least 6,000 members and affiliates in the region, with thousands more worldwide.

Gratteri estimates the group generates an annual turnover of more than 50 billion euros ($61 billion) – much of it from cocaine trafficking.

The early-morning blitz by over 300 police focused on areas of Calabria – Italy’s poorest region – under the control of the Mancuso clan, a powerful branch of the infamous ‘Ndrangheta, many of whose top operatives are among hundreds of defendants in an ongoing ‘maxi-trial’.

Fifty-six people, many already in prison, were put under criminal investigation for a series of crimes including mafia-related conspiracy, extortion, kidnapping, bribery and possession of weapons, police and prosecutors said.

READ ALSO: ‘Ndrangheta: It’s time to bust some myths about the Calabrian mafia

The incarcerated boss of the clan, Luigi Mancuso, also known as “The Supreme”, is the biggest mafioso in the massive mafia trial that started in January 2021.

Still, police said, his clan and affiliates, including the La Rosa and Accortini families, have continued to dominate illegal activities in the Vibo Valentia province, which is located right on the toe of Italy’s boot and is widely known as the ‘Coast of the Gods’ due to its stunning coastal views.

One mafia scheme involved the infiltration of a foreign tour operator in Pizzo Calabro, overlooking the Tyrrhenian Sea.

In Calabria, the extent of the ‘Ndrangheta’s reach in the local economy has made it near impossible to eradicate it.

By controlling the bulk of cocaine flowing into Europe, the ‘Ndrangheta has surpassed Sicily’s Cosa Nostra in power and wealth. It has extended far beyond its rural roots and now operates internationally, with illegal gains reinvested in the legitimate economy.

In the area around Vibo Valentia, extortion of local businesses and the fixing of public tenders is also common.

The allegations against those arrested Thursday include the transport and sale of stolen farm machinery to Malta and Romania, police said.

The sting carried out on Thursday extended to other parts of Calabria, Palermo in Sicily and as far as Rome and Milan, police said.

In a press conference, anti-mafia prosecutor Nicola Gratteri, whose efforts to defeat the ‘Ndrangheta have forced him to live under police escort for over 30 years, called the group a “fierce mafia syndicate” controlling areas around the tourist resort of Tropea.

The “total absence” of complaints to authorities was striking, Messina said, underscoring the ‘Ndrangheta’s power to intimidate.