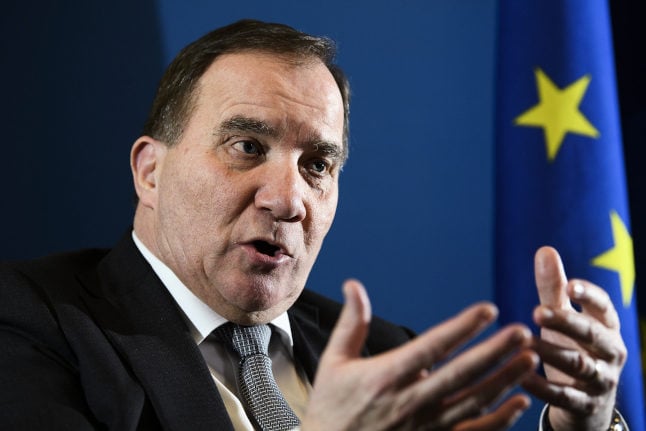 Löfven visited the Gallerian mall together with his bodyguards on December 20th, two days after he urged each and everyone in Sweden to avoid crowded places and do their part to help curb the spread of coronavirus, reported the Expressen newspaper on Tuesday.

“I hope and believe that everyone in Sweden understands how serious it is,” he said at the press conference on December 18th, as he announced a series of new restrictions, including caps on the number of people in shops.

“He was at Gallerian to collect something that had previously been handed in. The visit was carefully planned. The Prime Minister has followed the Public Health Agency's recommendations and his own calls to avoid crowding. I can't go into further details,” Löfven's press secretary Mikael Lindström told the TT news agency.

Expressen reported that the Social Democrat leader visited Stjärnurmakarna, a shop that sells and mends watches. The newspaper reported he had made another two visits to the mall earlier in December.

The Public Health Agency's latest nationwide recommendations from December 14th state: “In connection with the Christmas and After-Christmas trade, extra care may be required to avoid crowds. Both individuals and businesses have a responsibility to counteract the spread of COVID-19.

“Preferably limit the number of stores you shop in. Shop on your own, avoid shopping at times when a lot of people go shopping and do not prolong your stay at the premises of shops and shopping centres beyond necessity. Make sure to follow guidelines and instructions of shops and delivery points.”

At the time of one of Löfven's previous visits to Gallerian, on December 1st according to Expressen, the local recommendations for Stockholm stated: “Refrain from spending time in indoor environments such as shops, shopping centres, museums, libraries, museums, pools and gyms. Necessary visits to grocery stores or pharmacies can be made.”

None of these recommendations are coercive for individuals, but Swedish leaders including Löfven himself have repeatedly made clear that they are to be followed at all times. They do not entirely prohibit visits to shopping centres, but several of Löfven's critics argued that he as prime minister should be held to a higher standard.

“Stefan Löfven's actions undermine that entire strategy. Who will take his message seriously next time?” asked Expressen in a liberal editorial on Tuesday.

“Ministers and prime ministers who urge all of us to avoid Christmas shopping as much as possible should not themselves visit shopping centres, even if they follow recommendations. A kingdom for a watch? Nope,” tweeted Göran Greider, a Social Democrat journalist.

Löfven is not the only Swedish politician whose interpretation of the coronavirus guidelines has landed them in hot water this year. Justice Minister Morgan Johansson visited the Nova Lund shopping centre in southern Sweden on December 26th. He later called the visit “careless”, a statement Löfven agreed with at the time.

Finance Minister Magdalena Andersson was caught on camera visiting a ski resort, reported Aftonbladet on Wednesday. And Expressen reported on Wednesday that Dan Eliasson, the head of the Civil Contingencies Agency which is heavily involved in the country's coronavirus communication, had been seen on a flight to the Canary Islands in mid-December. Neither is illegal, but non-essential travel is discouraged.

Ebba Busch, leader of the Christian Democrats, sparked debate after dancing, hugging and kissing people on the cheek at a friend's 40th birthday party in late September, just days after Prime Minister Stefan Löfven had warned people to avoid hugs and crowded home parties amid rising infection rates in Sweden.

“Most of the party was held outside. In retrospect I could think it would have been better not to go, and that has formed the basis of my future decisions,” Busch told Expressen in an email.

Ella Bohlin, a Christian Democrat councillor in charge of elderly care in Stockholm, also attended the party, and also told Expressen that she regretted the decision in hindsight.

Sweden Democrat party leader Jimmie Åkesson was also caught on camera sitting close to and throwing his arm around guests at another 50th birthday party in Oxelösund.

“It is correct that there were occasional situations when guests wanted to take selfies and say hi. That happens even in other situations, for example at Ica. Generally I try to avoid body contact but sometimes things happen spontaneously without reflection,” he told Expressen in October.