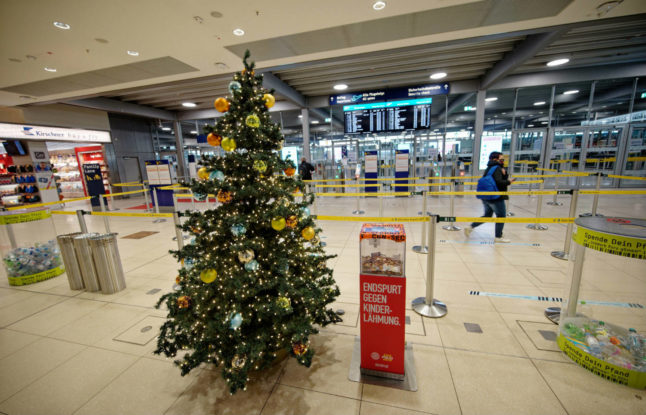 Many Brits are now effectively stranded in the UK after Germany issued a transport ban from December 22nd until January 6th.

That decision may be reviewed after the EU recommended ending the blanket ban.

The German Health Ministry said British nationals who “have valid residency permits” are allowed to return to the country from January 1st.

They have to be tested for coronavirus and undertake quarantine, as do others who come from an area classified by Germany as a 'risk zone'.

The EU has made it clear that residents in the EU who are stranded in the UK should be allowed to return home.

However, many Brits who travelled to the UK to spend Christmas with their families say they are worried about getting back into the country.

That's because the Brexit transition period ends on December 31st – and most Brits do not have their residency documents yet so may find it more difficult to prove they are German residents.

British and German authorities have previously advised Britons travelling after December 31st to bring with them proof of residency in Germany, such as an Anmeldung registration document or rental contract.

Freelance writer Abby Young-Powell travelled to the UK earlier in December and is self-isolating in Wales before visiting family for Christmas.

The 32-year-old helped set up a group so that others in a similar situation could communicate and talk to each other.

A few of us have set up a Whatsapp group for EU residents and nationals currently stranded in the UK. Idea is to share information and support each other. If anyone would like to join, or knows someone who might, DM me! #flights #EU #flightban #uktravelban #COVID

She said watching Sunday's events while in quarantine as countries began banning UK flights was an “anxiety inducing moment”.

“It was really, really stressful,” she added.

“Germany was one of the last countries to say something, but I knew it was going that way. I was in tears most of the day.

“I didn't really see anyone talking about it in terms of what it means for residents. It felt really lonely as well. I didn’t sleep at all that night because I was so stressed.”

Young-Powell worried she would be stuck in the UK for months, even though her life is in Berlin. The next day she tried to find more answers and talked to others.

That's when those affected decided to start a messaging group.

“Everyone is in difficult situations,” said Young-Powell. “Everyone was super stressed, everyone was panicking.

They have been discussing issues such as how to get coronavirus tests, and on the documents they need to get into Germany. Young-Powell was due to travel back to Berlin on December 28th – before the end of the Brexit transition period.

“From January 1st because of Brexit, we need to prove we are residents,” Young-Powell said.

“I’m now trying to get documents in order. I have my Anmeldung on my phone and I'm seeing what else I can gather.

I know that many UK nationals have been affected by the new coronavirus travel restrictions. We are providing consular assistance to individuals, and are in contact with the German authorities to seek further clarification. 1/2

Berlin resident Rohit Kakar, is also in quarantine before he visits his family in the East Midlands area.

However, the 32-year-old who works for an NGO, said it had been stressful to find out about the new coronavirus strain and travel ban when he arrived in the UK.

“I’m happy I get to spend some time with my family here,” he said. “But I think it’s not knowing what might happen. The fear of what might happen (with the flight ban) and lack of information.”

Kakar has dual British and German citizenship so he can prove he's a German resident. He added that the group had been “really helpful”.

READ ALSO: How to prove you're a resident in Germany

Some Brits have been affected by the ban in the other direction.

David Lewis in Frankfurt said he was planning to fly to UK for six days  on December 22nd to visit his mum in UK.

After his flight was cancelled he said he was offered a flight voucher so he was “generally very happy with the response”.

Lewis was also offered a refund on a train ticket in the UK so felt happy with this response, too.

However, he said his mum will “now unfortunately spend Christmas day on her own.

“But sadly there's no other way to travel,” he added.