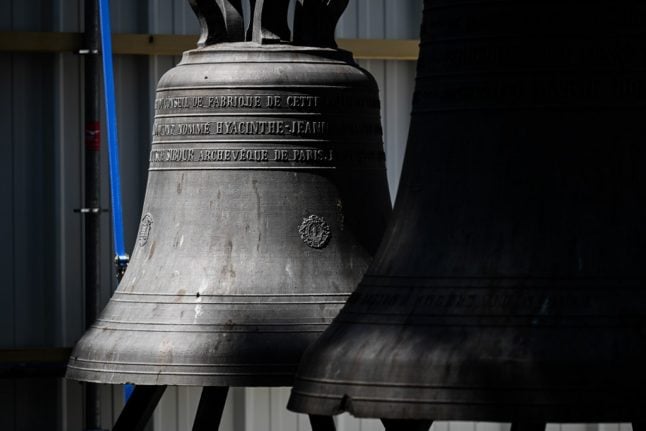 Some people are complaining about bells in Swiss towns. Photo by AFP

Tribune de Genève reported that an unnamed woman recently moved to Plan-les-Ouates, a municipality of just over 9,000 inhabitants in canton Geneva. She took up residence near an old schoolhouse.

The bell on the top of the school building rings every 30 minutes, day and night.

The new arrival complained that the chiming disrupts her sleep and asked town authorities to turn off the bell during the night.

But her request did not strike a chord; in fact, it has caused outrage among many of the town’s residents, who have launched a petition — signed by 300 people so far — opposing any move to silence their bell.

“There is no question of stopping the bell for a new arrival”, said longtime resident Gérard Genecand, who is spearheading the campaign to keep the around-the-clock tolling.

Jean-Claude Maillard, president of an association which manages municipal archives, is also angered by the woman’s request.

“It's like when a rooster crows in a village. When people from the city arrive, they complain about it”, he said.

Both say that townsfolk is “sentimentally attached” to the bell, which was originally part of Geneva’s fortifications and was gifted to Plan-les-Ouates in 1901. Since then, it had become firmly rooted in the town’s culture.

In its response to the resident, municipal officials sent a message that was clear as a bell: they refused to comply with her request because “this bell has been ringing for 120 years and no one complained,” they noted.”We have always heard it at night, but it never stopped us from sleeping because the body gets used to this type of noise very quickly,” Maillard said.

Mayor Xavier Magnin said that the resident will not let go so quickly. “She threatened to take legal action”, he said.

In bell-loving Switzerland, the nightly chiming is a widespread practice and an integral part of the culture.

Most people like this centuries-old tradition, which dates back to the age before smart phones and other electronic devices showed exact time.

And this is not the first time when bells set off an alarm in Switzerland.

In 2018, a dispute erupted in town of Hofstetten about the six-minute-long bell ringing at 5:30 am at the local church. Several residents asked that the morning chiming be postponed until 7 am, so they could get some more sleep.

But hundreds of outraged residents showed up at a church meeting and voted to leave the morning ritual unchanged for the sake of tradition.

Curiously enough, town authorities are much more lenient towards animals than people.

In 2019, the bells of a church in northern Switzerland have been switched off indefinitely so as not to disturb a pair of mating storks.

The Swiss cherish the bell tradition but many of the country’s foreign residents, not so much.

Switzerland’s English-language forum even has a thread called ‘Damn church bells’, which publishes complaints from bell-haters.

It also advises apartment seekers to check how close the house is to a church and to listen to bells before signing the lease.

This suggestion may seem odd to newly arrived foreign nationals, but it does ring a bell with those who are accustomed to Swiss ways.

Whether you are visiting the country as an exchange student or are here on a more permanent basis, you are likely to commit your fair share of faux pas on your way to becoming a true Swiss. But fear not, these can be easily avoided if you’re aware of some of the most important Swiss etiquette. Let’s check it out.

Grüezi, Bonjour, or maybe just a simple Hallo? Over the course of your time in Switzerland you will encounter many people, be it co-workers, fellow students or just strangers on the street – so it’s easy to find yourself overwhelmed with figuring out just how to greet people properly.

As with many things in Switzerland, the way to greet people, too, depends on the canton you’re in. In casual situations, such as when riding lifts or meeting people out on hikes, usually a friendly Grüezi, Bonjour, or Buongiorno will get the job done. Greeting anyone that isn’t friend or family with a Hallo is not common in Switzerland and is often perceived as rude. So, as a rule of thumb, always stick with the formal way of greeting people you’re not close with.

READ ALSO: Swiss culture shocks that may take some getting used to 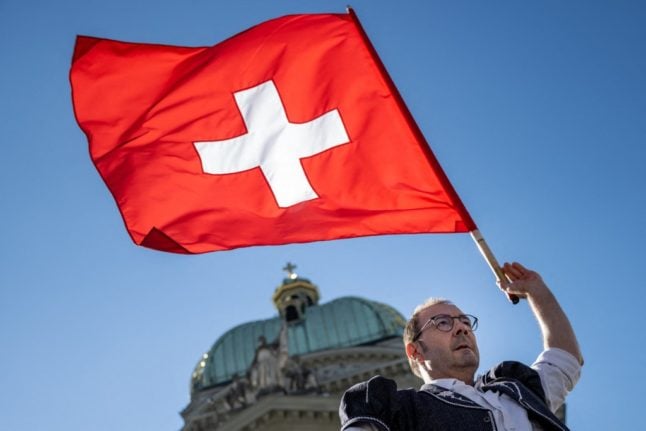 A flag thrower performs with a Swiss flag in front of the Parliament. Photo by Fabrice COFFRINI / AFP)

In a business environment, always greet people with a firm (!) handshake in addition to addressing them formally – this is crucial until the other person initiates an informal approach.

When it comes to greeting friends, however, the rules are generally a lot more relaxed, depending on the closeness of the friendship. While many Swiss friends are content with a quick Hoi, Salut, or Ciao, some will favour a more physical approach, such as a hug.

Good friends also greet each other with three kisses (left, right, left) – but be careful when greeting a French person, they start with the right!

Do give a small gift

If you have been invited to a party or homecooked dinner by a friend, colleague, or acquaintance, the etiquette is to bring a small gift as a thank you. In Switzerland, most people choose to bring a bottle of wine or a seasonal bouquet of flowers.

In a business setting, it is not necessary to bring or exchange a gift. 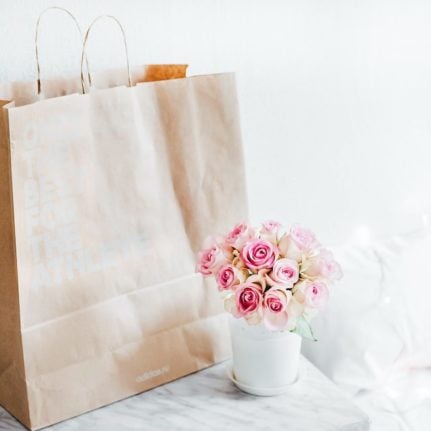 Bring a gift to your host in Switzerland. Photo by Alexandra Gorn on Unsplash

TIP: Refrain from bringing expensive or flashy gifts as this can be seen as tasteless and make your host uncomfortable.

Once you’ve stepped inside a Swiss home you will want to make for interesting conversation, but before you know it, you could be on your way to committing your first crime against Swiss etiquette. That’s right, the Swiss are notoriously private people which means discussions around divisive topics, such as finances, politics, and religion, are best avoided.

We all know the feeling: You’ve been waiting for your order to arrive for longer than anticipated, your stomach is growling, and you’re growing increasingly impatient. But where some people may be tempted to raise a hand and wave over the restaurant staffer, in Switzerland this is considered a big no-no. Likewise, you should always wait for everyone’s dish to be served and wish the whole party a “Guten Appetit” prior to digging in.

READ ALSO: ‘Suspicious of the unknown’: Is it difficult to make friends in Switzerland?

On that note, don’t be surprised to see a dog patrol the restaurant as you enjoy your long-awaited meal. Dogs are in fact allowed inside a remarkably high number of Swiss establishments, and diners are expected to pretend they’re part of the ambience.

Once you’ve finished your meal and are ready to ask for the bill, be sure to remember that tipping is not necessary in Switzerland as staff are paid a healthy salary. However, despite this, many Swiss still choose to round up their bills to the nearest franc.

If you’re invited for a dinner at someone’s home and the host wishes to make a toast, you will (regrettably) be expected to sit through the entire toast before eating. If you are the host yourself, remember it is important to make eye contact with your guests while addressing them. 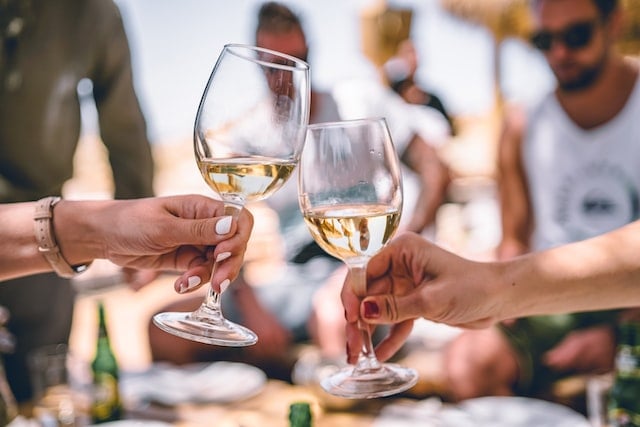 Photo by Zan on Unsplash

Brush up on fondue skills

If you find yourself in the land of cheese and chocolate, you are very likely to indulge in some delicious fondue sooner or later. But eating the melted cheese dish isn’t as straightforward as you might think, so make sure to get a hang of some of the key fondue rules before losing your bread in the cheese (the loser buys the next round of drinks!).

TIP: Fondue is eaten in the winter, avoid restaurants offering it in the summer.

When out shopping, be sure to greet shopkeepers when entering a store and paying for goods. However, don’t expect fellow shoppers to queue up. The Swiss, while polite, do not have a queuing culture and will absolutely step in front of you if you let them!