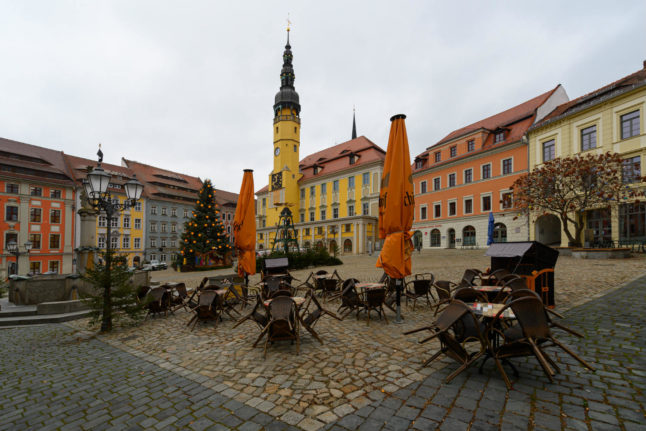 Bautzen in Saxony has one of the highest incidence rates of coronavirus in Germany. Photo: DPA

“It is striking that the worst affected regions are those with the highest AfD vote” in 2017's general election, says Marco Wanderwitz, the government commissioner for the former East German states.

Wanderwitz himself hails from Saxony, which had the highest incidence rate in Germany at 319 on Tuesday – well above the national average of 114, according to the Robert Koch Institute (RKI) disease control centre.

The anti-Muslim, anti-immigration Alternative for Germany (AfD) party, which is increasingly taking aim at government measures to tame the virus, achieved its highest vote share of 27 percent in the same state three years ago.

But Saxony is not the only region with both high infection rates and big backing for the far right.

A team from the Institute for Democracy and Civil Society in Jena has embarked on a study on the “strong and very significant statistical correlation” between AfD support and the intensity of the pandemic, its director Matthias Quent said on Twitter.

However, “there could be factors that explain the high AfD results and at the same time the high incidence rates” without the two necessarily being linked, the researcher cautioned.

The proportion of elderly people and large families, the presence of cross-border commuters and the organisation of the care system, which differs between states, could also influence the intensity of the pandemic, he said.

Nevertheless, the trend is significant and more pronounced in Germany's second wave due to wider general distribution of the virus.

The Covid-19 situation in Saxony has become so critical that local authorities on Tuesday announced a slew of tougher restrictions, with schools, kindergartens and many shops closed from next week.

In cities such as Görlitz and Bautzen, where the far right attracts more than one in four voters, the incidence rate is around 500.

Meanwhile, in the gentrified state capital Leipzig, where the Greens are winning the race against the far right in opinion polls, the infection rate was close to the federal average on Tuesday at 140. Scepticism about the virus and measures to contain it is rife in Saxony, the birthplace of the Islamophobic Pegida movement — including among medical personnel and economic decision-makers.

In Bautzen, celebrity entrepreneur Jörg Drews, who runs a local construction company, has been pouring his profits into “alternative media”, according to the ARD broadcaster.

The Regen district in Bavaria, for example, had the highest incidence rate in Germany on Tuesday at 579. Three years ago, it also gave the AfD its highest score in Bavaria at more than 16 percent.

In Gelsenkirchen, the AfD's biggest stronghold in Germany's most populous state of North Rhine-Westphalia, the incidence rate is three times higher than in the neighbouring city of Muenster (169 versus 56).

Meanwhile, in the districts with the lowest infection rates, mostly in the northern state of Schleswig-Holstein, the AfD vote is less than eight percent.

The AfD is the only German political party to have openly displayed scepticism of – and opposition to – virus restrictions.

AfD lawmakers have voiced opposition to wearing masks in the Bundestag lower house of parliament, for example, with one calling them “burqas for all”.

More than half of AfD voters (56 percent) consider Germany's virus restrictions to be excessive, according to a recent Forsa poll.

The far-right party has also been linked to the Querdenker or “Lateral Thinkers” movement, the umbrella group for most of Germany's sometimes violent anti-shutdown demonstrations since the outbreak of coronavirus.

Almost a third of such protesters plan to vote for the AfD in national elections in 2021, according to a study for the daily Frankfurter Allgemeine Zeitung.

“The link between the conspiracy theorists and the far-right scene is unfortunately logical, because they share many theories,” Miro Dittrich, a researcher at the Amadeu Antonio Foundation fighting racism and extremism, told AFP.

“They both believe a small elite is secretly controlling events to the detriment of the 'Germans',” he said.