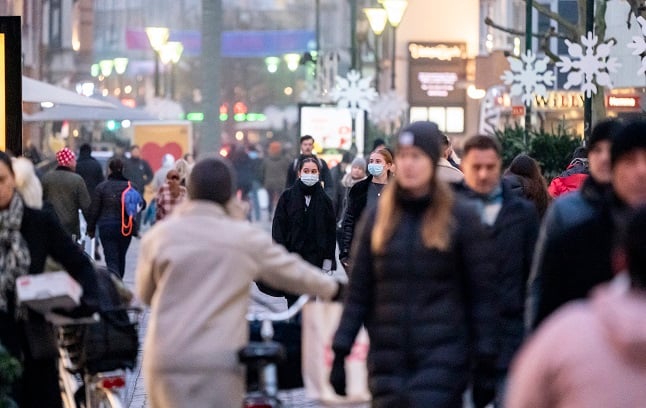 We asked our readers if there were any specific measures they would like to see in Sweden. The survey was not scientific (read more about how we carried it out at the end of the article) but gives a snapshot of the responses we received from readers living across the country from their 20s to 70s, with a wide range of nationalities.

Here is a look at what they told us.

By far the most common response was face masks. Well over half of the respondents (152 readers) said they would appreciate mask-wearing being either mandated or recommended. Some specified they would approve of such a requirement in specific environments such as on public transport, in supermarkets, at schools, or at doctor's offices, and cited institutions such as the World Health Organisation and Swedish Academy of Sciences which have recommended mask-wearing.

Others called for clear guidance from Swedish authorities on correct use of masks, to combat concerns stated by the Public Health Agency that such a recommendation might lead to other measures being taken less seriously. Several readers said they already wore face masks regularly, but stated that they were treated strangely by others in public.

“As much as it annoys me, I do think masks on public transport are probably a good idea. It is very difficult sometimes to keep your distance from people there, and masks are better than nothing,” said a German-Swedish reader.

“The reasons [Swedish authorities] give for refusing to recommend masks as an additional measure do not make sense. It seems a bit like arrogance – to dismiss all of the opinions from renowned scientists and organisations across the world and also within Sweden, and insist that the team at the public health agency have made the correct analysis,” a reader from Scotland said.

One reader pointed out that masks had a value as a visual reminder. “When you see someone with a mask, or when you are wearing a mask, it is a constant visual reminder that you need to social distance,” said the reader, who has been in Sweden for 15 years. After face masks, the most common change our readers wanted to see was stricter enforcement of current recommendations. Everyone in Sweden is currently urged to work from home if possible, avoid socialising with people outside their household, stay home if unwell, and keep a distance from others in public places, among other national and local recommendations.

Many readers wanted to see these recommendations either made into laws, or otherwise made stricter by introducing fines for individuals or businesses found violating them or explaining more clearly to the public exactly how recommendations should be interpreted in daily life.

Three people specifically said that private gatherings should be restricted. These are not included in a nationwide ban on public events of more than eight people, with the government saying a maximum of eight should be “the new norm”.

“Give police the power to enforce restrictions with fines, and also allow the public to ring a hotline to report breaches […] My neighbour keeps having friends over for dinner and get-togethers with no regard for the older residents, or anyone else here in this apartment building. I am sure that this is irresponsible behaviour is replicated across Uppsala and Stockholm,” said one Australian who has been in Sweden for five years.

“It feels like there needs to be some legislation that allows the sitting government to take control if a situation starts to spiral,” said another reader, who works in hospitality and is currently unemployed.

A further 11 people said they wanted Sweden to enter a lockdown, which usually means closure of non-essential businesses and limits on private gatherings, either for a short period of time or limited to areas with a high level of spread. A sign in Uppsala reminds people 'it's easy to do the right thing'. Photo: Claudio Bresciani/TT

A total of 15 people said they would like to see changes to the testing and contact tracing system, including more tests for asymptomatic people and wider scale contact tracing.

“I want to see widespread testing with thorough attention to detail in this testing […] In addition, I want to see tracing of the virus to its origin in order to prevent further infection, a practice that has proved successful in other countries,” said Maureen, a South African reader.

“Tracing should be done by the trained people who can do the actual tracing. Simply asking people who tested positive to do it does not work. Activate the contact tracing app. It is working in so many countries and it should be done here too especially since there is no lockdown,” said a reader in Stockholm.

The majority of respondents to our survey strongly disagreed that the Swedish public was currently following the recommendations in place, and several people suggested ways the authorities could effectively get their message out.

“Government could have sent out SMS (in different languages) to all people – to try to spread awareness about the disease. Special situations need special measures!” suggested an Indian reader working in project management.

“I'd like [press conferences and recommendations] to be announced more and to be advertised more on social media. During a trip to the UK my adverts on social media were filled with government adverts in response to the pandemic. But not here,” said British reader Daniel. Closure of shops, restaurants and gyms

Several more suggested closure of specific businesses: 11 wanted schools to return to online learning, six called for gyms to be closed, five for bars and restaurants to be closed, and four for other shops to be closed, while a further four suggested instead limiting the number of people in shops.

“The recommendations should be enforced by closing the venues. For example, if people should not go to gyms, the gyms should be closed,” said an American engineer in Stockholm.

“Schools should be closed. International schools in the city especially, as kids must commute by public transport. These schools can't be compared to normal local Swedish schools, where kids live within walking distance,” said Alexandra, a Canadian-Colombian national who moved to Sweden a year ago.

Since we carried out the survey, Sweden announced that upper secondary schools (typically for teenagers aged 16 to 18) would return to online learning as in spring, but younger children are still generally required to go into school as long as they are not symptomatic or sharing a household with someone who has Covid-19.

Limit numbers on public transport or in shops

“They need to somehow control the standing room only situations on the rush hour subways. There are many situations where most people are being careful, but super spreader subways will wipe out much of that good,” said Richard from the US. People queue for a bus in Uppsala. Photo: Claudio Bresciani/TT

Some people who responded to the survey spoke to long-term measures, specifically calling for improvements to the elderly care system and an in-depth analysis of the response in order to develop future policies for public health and pandemic response.

“I hope after the pandemic the data is analysed for real and see what areas of response could be improved in the future. Hopefully elderly care organisation will get a proper overhaul and some measures in place how to quickly scale up emergency medicine response both in equipment and people,” said an Estonian resident of Sweden who was overall positive towards the Swedish response.

The majority of those who filled in The Local's survey said they disagreed that the government and Public Health Agency were doing a good job in their handling of the pandemic, but not everyone thought that extra measures were needed.

Several said they appreciated Sweden's strategy and were against introducing a lockdown or legal limitations on daily life, such as restricting private gatherings.

A handful of people said that they thought certain existing measures should be relaxed, with the most commonly criticised measure being a ban on post-10pm alcohol sales.

“Having closing times restricted for bars/pubs is impacting business not the spread of the virus. The virus doesn't care what time it is! Restaurants are already struggling. I believe that we should go back to table service only and places should be checked consistently that they adhering to the rules,” said an Australian-Swedish citizen.

Thanks to everyone who responded to our survey. We read all the comments you gave carefully, and will keep them in mind as we continue to report on the coronavirus and other issues that affect your lives in Sweden. An overview of the responses is available to read here.

The survey was not scientific, as the purpose was to give a snapshot of how our audience of international residents feel about the response to the pandemic. We closed it after receiving 250 responses, and removed answers that did not include a full name for verification purposes. The question 'If there is a specific measure you would like to see in Sweden which is not currently in place, please tell us here (and explain why)' was optional. Some readers asked to remain anonymous.

We heard from readers originally from six continents, including students, retirees, unemployed people and those in a range of jobs. This is the third survey of this kind we have done since the start of the pandemic; see what our readers said in April and in June.