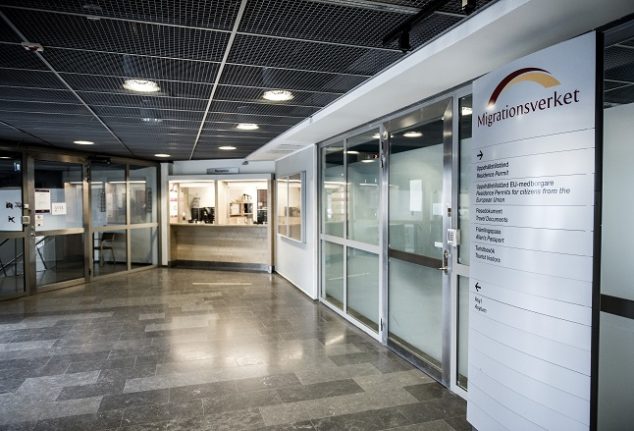 Several offices are not accepting in-person visits for certain issues, instead asking applications to get in touch online or by phone. Photo: Marcus Ericsson/TT

Applications for first-time work permits fell during the spring and summer, but rose again in the autumn.

This prompted the Migration Agency to increase its total estimate of work permit applications for the year from 39,000 (predicted in July) to 44,000, which is still around 6,000 less than the agency's estimate in May and around 15,000 fewer than last year.

Of the 39,169 first-time work permit applications submitted in Sweden by the end of October, 70 percent were approved and the average processing time was 130 days.

A further 32,240 applications were made to extend work permits, of which 89 percent were approved with an average processing time of 95 days.

The processing times have increased by around two thirds for first-time permits, which took an average of 81 days to process in 2019, but the 2019 average processing time for renewals was longer at 104 days.

These figures don't just include international workers, but also any partners or relatives who were included on the same permit (this is typically the case if both partners will move to Sweden and the partner with a job offer will work for at least six months) as well as people on temporary work permits. Out of the total, 18,253 of the applications were from people moving to work for a Swedish company.

“Even if average processing time might differ from month to month this year, it is hard to ascribe it solely due to the spread of corona et cetera. Too many uncertainties can affect the outcome,” said a spokesperson for the Migration Agency when The Local asked how processing time had changed year-on-year.

The press spokesperson also outlined several actions that the agency has taken due to the pandemic. These included urging applicants to use online services, email or telephone rather than visiting offices in person, as well as reducing opening hours, closing children's play areas, and limiting the total number of people accepted at one time in service centres. They said no offices had been closed due to the pandemic.

They also told us that it was not possible to make changes to residence permit criteria to take into account the impact of the pandemic – for example by extending the time people have to apply for a renewal, or giving people on work permits who lost their job due to the pandemic extra time to find a new job. The agency's website notes that the Migration Agency makes its decisions based on Swedish laws which “do not consider any extraordinary events”.

“The Swedish Migration Agency cannot make any changes in regards to residence permit criteria. Only the Swedish Parliament has a mandate to make such decisions, following a proposal from the government,” the agency spokesperson said.

“Visitors with expiring visiting visa are since March able to apply for a guest visa valid for 90 day, if they cannot travel back to their homeland due to travel restrictions.”

By the end of October, 28,550 people had applied for permits to move to a family member or partner in Sweden, and a total of 16,916 such applications were approved. That's a huge drop from the 31,785 people granted a permit for family reunification during 2019.

As of October, there were 27,232 open cases for family reunification, which means people had applied for a permit to join a family member in Sweden but not yet received a response. And there were 17,417 people waiting for a decision on their first-time work permit application.

As for people applying for Swedish citizenship, there was no change to the expected number of applications during 2020.

Processing time for these applications has also been slow, with figures shared with The Local showing that citizenship applications took an average of 394 days to process in 2020.

A total of 70,410 applications were made, and 65,336 decisions were reached (including applications submitted during this year as well as others in the queue) of which 85 percent were approved.

Has your permit application or renewal been affected by the pandemic, or do you have another question about residence permits in Sweden? Please fill in the form below, or you can contact our editorial team at [email protected].

When was the law passed and when does it come into force?

The parliament passed the new law on April 21st, and the final text of the change in the law was published on May 5th. It will come into force on June 1st.

What does the new law say about the ‘talent visa’?

It says that “in certain cases”, a temporary residency permit can be granted to a foreigner who wants to “spend time in the country to look for work or to look into the possibility of starting a business”.

To qualify the applicant must:

How long can people initially stay in Sweden under the talent visa?

The residency permit will be valid for a maximum of nine months.

Which agency will assess applications for the talent visa?

The government has decided that applications should be assessed by the Migration Agency. The Migration Agency will publish more details on the requirements, such as what qualifies as an advanced degree, what documents need to be submitted, and how much capital applicants will need to show they can support themselves, in the coming weeks.

The Migration Agency is also likely to develop a form for those wishing to apply for the talent visa.

What level of education is necessary?

What is meant by an “advanced degree” has not been set ou in the law, but according to Karl Rahm, who has helped draw up the law within the Ministry of Justice, a master’s degree (MA or MSc), should be sufficient.

How much capital will applicants need to show that they have?

According to Rahm, the amount of money applicants will need to show that they have is likely to be set at the same level as the minimum salary for those applying for a work permit, which is currently 13,000 kronor a month. If he is right, this means that someone applying for a nine-month visa would have to show that they have 117,000 kronor (€11,259) in saved capital, plus extra for their trip back to their home country.

Can applicants bring children and spouses?

“You will not be able to bring your family with this kind of visa, since the idea is that it’s for a relatively limited amount of time,  just to see if there is employment for you, or if there is a chance of starting a business,” says Elin Jansson, deputy director at the Ministry of Justice, who helped work on the new visa. “And if you do decide to stay in Sweden, then you apply for a regular work permit for starting up a business, and then you can bring your family.”

Where will detailed information on the requirements for a talent visa be published?

The Migration Agency will publish detailed requirements on the talent visa on its Working in Sweden page when the law starts to apply on June 1st.

What is the reason for the talent visa?

Those searching for a job or researching starting a new business in Sweden can already stay for up to 90 days with a normal Schengen visa. The idea behind the talent visa is to give highly educated foreigners a little longer to decide if they want to find a job or set up a business in the country before they need to go the whole way and launch a company.

How many people are expected to apply?

In the government inquiry on the new work permit law, experts estimated that about 500 people would apply for the new talent visa each year, but it could end up being either much more, or less.

“It’s really hard to tell. There could be a really big demand. I don’t think it’s anyone can really say before this comes into effect,” Jansson said.