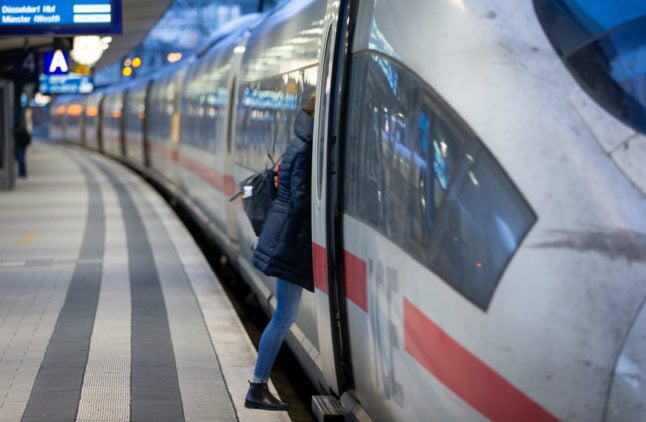 When will people be allowed to freely travel within Germany again?

First things first: travel is not banned. But politicians, including Chancellor Angela Merkel, are urging people to stay at home as much as possible and avoid travel in a bid to control the coronavirus spread.

For this reason, overnight accommodation in Germany – including hotels, holiday homes and guest houses –  is only allowed for “necessary and expressly non-tourist purposes”. This applies initially until December 20th but may also be extended in January.

However, states such as North Rhine-Westphalia and Hesse said on Thursday that they would allow people visiting family to stay at hotels. It's expected that other states will follow suit in the coming weeks.

It seems likely that other restrictions, however, will remain in place to ensure that as few people as possible are on the move during the Christmas holidays, which now begin almost everywhere in the country when schools finish on December 19th.

“The holidays should not be a risk,” said Bavarian state premier Markus Söder of the Christian Social Union (CSU) after the consultations between the federal government and states on Wednesday. According to North Rhine-Westphalia's leader Armin Laschet of the Christian Democrats (CDU), exceptions may only be made for family visits.

The German Hotel and Restaurant Association (Dehoga) said in advance that it doesn't make financial sense for establishments to start up operations for just a few days over the festive period. So if they can open, they'll be hoping it's worth their while.

“Restaurants and hotels are not garages that you can open and close at will,” said Association President Guido Zöllick, reported the Süddeutsche Zeitung.

Can a holiday in Germany that has already been booked be cancelled free of charge?

As long as hotels are not allowed to accept tourists, it is possible to cancel a holiday free of charge, experts say. If a hotel or holiday home boss is unable to provide accommodation at all due to official regulations, the guest does not have to pay for it under German law.

Holidaymakers should use the “impossibility of performance” reason, according to the Federation of German Consumer Organisations.

Are you allowed to visit relatives in other parts of Germany and stay overnight with them?

Even when it comes to visiting relatives, Merkel and states have made an urgent appeal to “reduce contacts as much as possible”.

People in Germany are urged to refrain from private travel and visits unless they are absolutely necessary.

As we mentioned above, during this relaxation period it will likely be possible to visit family in Germany but we'll find out more information on that later in the month. What about day trips?

At the moment even regional day trips should be avoided, according to the government and states. Some regions, such as Bavaria, are imposing a 10-day quarantine requirement on those who cross the border for a tourist day trip.

Popular destinations such as amusement parks are closed anyway throughout the shutdown. The message? Keep it close to home.

What are the prospects for a short holiday in neighbouring countries?

Travelling abroad is not prohibited, but authorities want residents to stay at home and avoid travel. Moreover, all countries bordering on Germany are coronavirus risk areas.

If you stay in a risk area you will usually have to go into a 10-day quarantine when you return. You can take a coronavirus test after five days and if it is negative, the isolation period can end.

If you cannot work at home during this time, you will not receive a salary because it's a voluntary trip to the risk area.

Are trains and long-distance buses running?

Necessary journeys can still be made so trains are running but they are are much emptier because fewer people are travelling.

In order to ensure even more space in the carriages, it will no longer be possible to reserve all seats on long-distance trains.

The long-distance bus provider Flixbus stopped running in Germany, Austria and Switzerland at the beginning of November. Although trips on Christmas days can be booked again online, there is still no official notification as to whether the buses will actually be running again then.

Air traffic has already been greatly reduced for months. If a booked flight is cancelled, passengers are entitled to a refund under EU law. However, the current coronavirus restrictions do not entitle passengers to simply cancel a flight for free.

What rules apply to holidays abroad?

Germany has classed most countries in the world as risk zones which means residents are advised against travelling to them and will have to quarantine when returning.

What about travel in the coming months?

When and where people will be allowed to travel again this winter will depend on whether the number of new infections can be reduced.

Nevertheless, if you've booked a skiing holiday in February it can't yet be cancelled free of charge. The restrictions on travel in Germany are initially limited until December 20th.

Most destinations abroad remain inaccessible – either because travel warnings have been issued or because holidaymakers from Germany are not even allowed into the country due to the Bundesrepublik being a coronavirus risk area.

Currently, it is possible to travel to the Canary Islands or Madeira, for example, but only with a negative coronavirus test. Mauritius, a popular winter sunny destination, also admits tourists, but they should bring time with them: after a test at the airport, they first have to be quarantined for a fortnight in a state-approved hotel.

Please keep in mind that this article, as with all of our guides, are to provide assistance only. They are not intended to take the place of official legal advice.