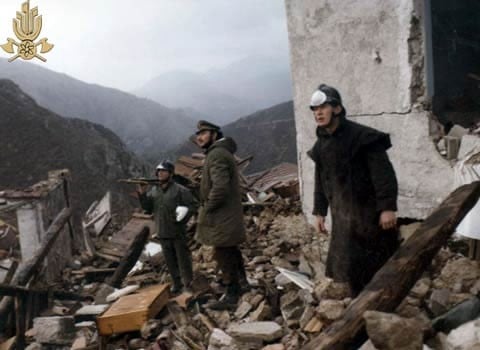 Firefighters stand amid rubble in an unnamed village devastated by the 1980 Irpinia earthquake. Photo: Vigili del Fuoco/Italian fire brigade
On the evening of November 23rd 1980, a devastating earthquake hit southern Italy claiming almost 3,000 lives. tI lasted no more than a minute, but it changed the area forever.
The 6.9-magnitude quake destroyed dozens of villages, injured around 8,000 people and left around 300,000 homeless in the southern Italian regions of Basilicata, Campania and Puglia.

November 23, 1980, a magnitude 6.8 #earthquake hits the Italian city of Irpinia (Italy), 2.600 people are killed. The shaking was so strong that the needle of this seismometer broke off https://t.co/xF6hfNW2wm pic.twitter.com/ytdLk7pCU5

Shockwaves were felt from Sicily to the Po Valley in the north. Images of the aftermath shook people across Italy, and the world.
Memories of the day are fresh in many peoples’ minds today.

#OnThisDay 40 years ago, remembering about 3000 casualties ??. It was a Sunday afternoon and I was strolling with friends less than 50 miles from the epicentre -a feeling that cannot be forgotten. https://t.co/njoyALHi20

President Sergio Mattarella on Monday described the Irpinia earthquake as the worst catastrophe in the history of the Italian Republic.
“40 years have passed since the enormous tragedy caused by the earthquake that devastated Irpinia and Basilicata, also affecting part of Puglia,” he said in a statement issued on Monday.
“Nearly three thousand people died under the rubble of their homes, or as a result of the destruction of buildings. Many lives could not be saved due to the difficulties and delays in the rescue.”
Reports say it took up to 48 hours for rescuers to reach some of the worst-hit villages.

Today it's 40 years since the earthquake in Irpinia, southern Italy, that caused 3,000 deaths. In the following days, the Naples newspaper titled “Hurry up”, and then Andy Warhol made it a masterpiece for Lucio Amelio's “Terrae motus” collection: https://t.co/zj4EmmSxOd pic.twitter.com/sGEGeXM0p6

“On the anniversary of the most catastrophic event in republican history, I would first like to remember the victims, and with them the inextinguishable pain of their families, to whom I express my feelings of closeness,” Mattarella said, adding that “suffering, despair, and sacrifices have continued for years on the road to reconstruction.”

People from across Italy were involved in the rescue and rebuilding effort, and aid in various forms came from far and wide over the following months and years.

In 1981 when we purchased a new Mobile Library, our old vehicle was sent from #Orkney to Basilicat in the south of Italy to provide a temporary school library service following the devastating Irpinia earthquake which struck in November 1980. pic.twitter.com/HVLEsJ0n6T

Four decades later, some reconstruction work still stands unfinished.
One off the most well-known stories of the disaster is of the church in Balvano, Potenza, where 66 children and teenagers were killed when the earthquake brought down the church roof, effectively erasing a generation of the town.Today the rebuilt church stands as a memorial to the lost generation.

Today the University of Basilicata, in Potenza, was built on a site where buildings were flattened by the earthquake.

It was built partly as an attempt to stop, or at least slow down, the emigration of young people from the south to other parts of the country and abroad.

T university was completed in 1991, and the then-President of italy, Francesco Cossiga, addressed students in a lecture hall, saying: “My invitation to you is to have the courage to stay in the unfortunate south, in this poor land of yours.”