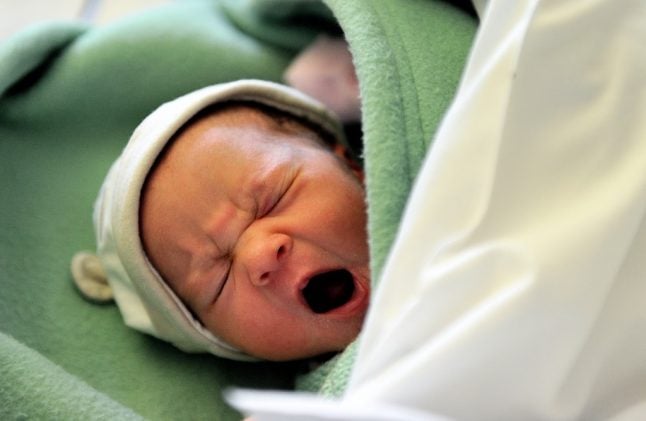 Over the course of last year, 3,944 Emmas were born in France, according to French national research institute Insee, which ranks the 10 most popular baby names in France every year.

The English sounding girl's name, which actually has Germanic origins, beat traditional French names such as Jade and Louise, which came second and third with 3,820 and 3,752 babies respectively.

For the full lists, scroll down.

Gabriel won for the second time in a row, albeit with smaller margin than the previous year (5,419 babies were called Gabriel in 2018).

These names are, like most of the names that made the top 10 boy's list, quite traditional French boy's names.

READ ALSO: The 6 boys' names that mean something very different in French

You can see what name was the most popular locally in the maps below:

The French daily Le Parisien has made an online tool to search for the most popular name in your area. Click on this link, scroll all the way down, choose your département and a full list pops up. Is your name Arya? The fierce young female Game of Thrones character seems to have inspired many parents to name their babies after her (more below). Photo. AFP

Soon to be dethroned?

Neither Emma nor Gabriel are traditional French names with longstanding and recurrent popularity comparable to old French names such as Marie or Louis.

Emma became popular in the 90s and has remained so ever since, but has been gradually losing ground since 2005.

Gabriel, which saw a massive upsurge in popularity in the 2000s, has seen its popularity drop since sometime around 2015. The girl names that saw the biggest popularity boost last year were Joy and Arya. While neither made the top 10-list, they did increase by 46 and 38 percent respectively since 2018.

Joy is another English name, while Arya is probably best-known from the world famous series Game of Thrones.

It's not the first time a celebrity name gains sudden popularity in France.

Back in 2018, 1,169 sets of parents picked the name Aya after the singer behind chart-topping hits such as Djadja and Pookie.

On the boy side, 1,211 babies born that year were named Kylian, a newcomer name likely made popular by the 2018 French World Cup hero Kylian Mbappé.

But in terms of celebrity naming we're still a long way from 1991 when French parents turned their backs on traditional Gallic names and went absolutely mad for the name Kévin.

That year, some 14,087 bébé Kévins came into the world in France, with the accepted explanation pointing to two Hollywood films.

What do a carpenter, a detective, and a bank robber screeching to a halt in their getaway car all have in common?

In English, not much – but in Italian, they could all be said to inchiodare (eenk-ee-ohd-AHR-eh) in the course of their professional activities.

In its simplest form, inchiodare simply means ‘to nail’ (chiodo, ‘kee-OH-do’, is a nail) – a picture to a wall, or a leg to a table.

But like ‘to nail’, inchiodare has more than one definition.

You can use it to describe someone or something being ‘pinned’ in place, without actually having been literally nailed there.

Mi ha inchiodato al muro.
He pinned me to the wall.

You can be metaphorically inchiodato to a place in the sense of being stuck there, tied down, or trapped.

Dovrei essere in vacanza e invece sono inchiodata alla mia scrivenia.
I should be on holiday and instead I’m stuck at my desk.

Siamo inchiodati a questa scuola per altri tre anni.
We’re stuck at this school for another three years.

Just like in English, you can inchiodare (‘nail’) someone in the sense of proving their guilt.

Chiunque sia stato, ha lasciato tracce di DNA che lo inchioderanno.
Whoever it was, they left traces of DNA that will take them down.

Ti inchioderò per questo omicidio.
I’m going to nail you for this murder.

Senza la pistola non lo inchioderemo, perché non abbiamo altre prove.
Without the gun we’re not going to get him, because we have no other proof.

For reasons that are less clear, the word can also mean to slam on the brakes in a car.

Hanno inchiodato la macchina a pochi passi da noi.
They screeched to a halt in the car just a few feet away from us.

Those last two definitions mean that you’re very likely to encounter the word when watching mystery shows or listening to true crime podcasts. Look out for it the next time you watch a detective drama.

In the meantime, have a think about what (or who) you can inchiodare this week.