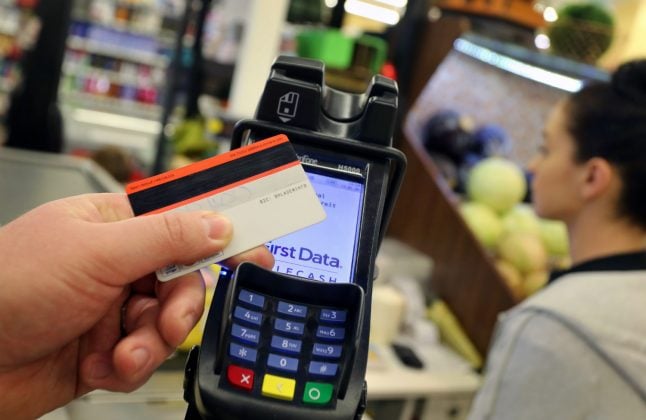 In a country where cash is king, Germans have stubbornly kept up a tradition of using cash, even as consumers in other countries switched to the ease and speed of cashless payments in recent years.

But with the spread of Covid-19 came the desire to avoid touching notes and coins.

READ ALSO: Cash or card? How has the coronavirus pandemic changed your payment habits in Germany?

The German government further sped up the shift by doubling the transaction limit on contactless payments to €50.

Card payments will “exceed cash payments in Germany for the first time in history” in 2020, the Euromonitor study said.

The study also found that younger citizens especially are more trusting of technological advances like paying by smartphone, and less worried about privacy than previous generations.

The study expects the value of card payment transactions in Germany to surge by 28 percent from 2019 to 2025, while cash transactions are projected to drop by 34 percent over the period.

It is still common to find small retailers that don't take cards in Germany, though it is becoming rarer.

Credit cards are still not widely used, with debit cards making up three-quarters of all card payments in 2019, according to Germany's central bank.

Cashless transactions rose 48 percent in May 2020 compared with the same month the previous year, according to the National Association of German Cooperative Banks.

READ ALSO: Will the coronavirus pandemic speed up the end of cash in Germany? 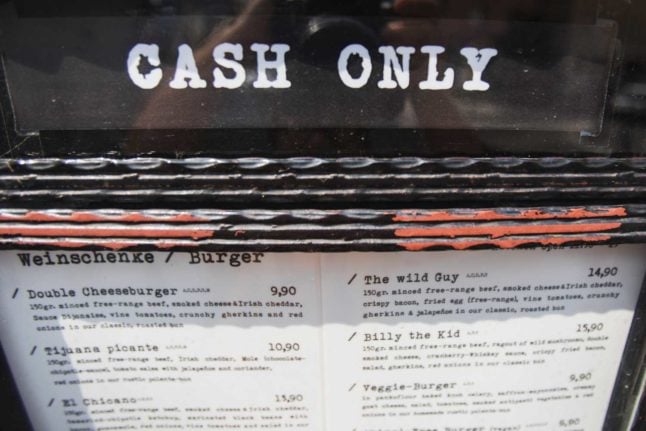 Austria loves cash, but will the pandemic change all that? Photo: ALEX HALADA / AFP

Unlike Scandinavia, the Benelux countries or the British Isles, German-speaking Europe remains keen on cash.

For a number of historical reasons, cash is still king in Austria, Germany and much of Switzerland – or at least until the onset of the coronavirus pandemic.

Austria loves cash so much that it tried to make a right to cash payments part of the constitution in 2019.

While the effort ultimately failed, it showed just how much Austria loves that cold, hard stuff.

A pre-pandemic study showed that Austria are the kings of cash, with 83 percent of Austrians using cash regularly, compared with 75 percent of Germans and 71 percent of Swiss.

This is compared with card leaders such as Sweden, where cash is expected to disappear completely by 2030.

The number of domestic card payments increased by 20 percent in 2020 in Austria, rising from 900 million payments to 1.1 billion, according to Payment Services Austria (PSA).

In the same period, foreign card transactions also increased in Austria in 2020, crossing the 1.2 billion mark for the first time.

Contactless and mobile payments are also experiencing a dramatic rise in Austria.

Similar trends have been observed in Germany and Switzerland, leading many to ask whether the shift is set to become permanent.

Concerns over the cleanliness of cash and a desire to avoid trips to the ATM have been flagged as a major reason for the change.

The number of cash withdrawals from ATMs in Austria fell significantly, from 137 million to 100 million in 2020.

Contactless payments increased by 34 percent in 2020 compared to 2019, according to PSA.

In March 2020, Austria also made it easier to pay with contactless cards by increasing the maximum amount to be paid without entering a pin from €25 to €50.

Retailers pushed for the change in a bid to reduce the risk of coronavirus transmission and the limit looks to remain in place for the foreseeable future.

According to the PSA, the card is here to stay, even when and if life returns to normal after the pandemic.

Harald Flatscher, Managing Director of PSA, said “the steady upward trend also shows how much the use of the card has become part of people's everyday lives.”

A permanent shift to card?

There are however signs that the trends might be temporary.

While 2020 saw an increase in card payments, it actually saw a decrease in the amount spent overall, which could amount to a temporary trend.

Another big change is the lack of tourist traffic, making it hard to determine if any shift is actually permanent.

READ MORE: Will the coronavirus pandemic speed up the end of cash in Germany?

Writing in Austria’s Der Standard on Wednesday, January 27th, Muzayen Al-Youssef outlined the concerns of many Austrians when pointing to the traceability of card.

“Transparency also has consequences. Think, for example, of so-called credit scoring, in which the creditworthiness of a customer is calculated based on the available data,” he said.

“If you drink too much alcohol, in extreme cases you could suddenly no longer finance your own apartment.

“Does a bank really always have to know when – and, by the way, where – its customers bought sex toys, alcohol or cigarettes?”