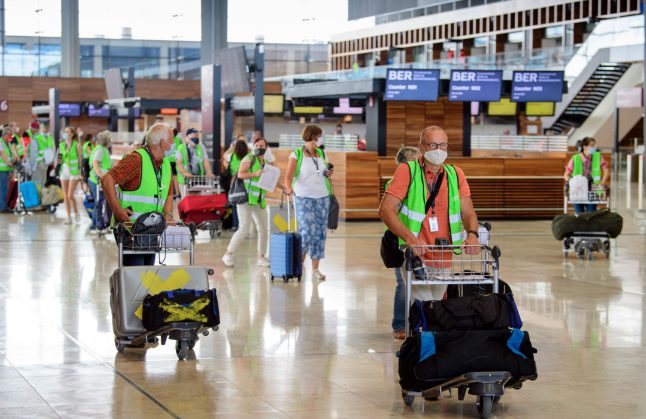 Volunteers at the airport during the test day. Photo: DPA
There's been more plot twists than a soap opera. But the unbelievable may just be about to happen: after nine years of planning errors, technical issues and delays, the Berlin Brandenburg (BER) airport is finally set to take off at the end of October.

Before that happens, though, volunteers had to test it out to see how user friendly the new travel hub is.

Around 400 people attended a 'dress rehearsal' day at the airport, near Schönefeld airport at the end of July. Originally, 20,000 people were supposed to attend the test day but this had to be scaled back because of the coronavirus crisis.

The Local spoke with Liverpool-born Glen Pearson, a photographer based in Berlin, to find out what it was like. The Local: How did you get involved with the volunteer BER visit and why did you want to do it?

Glen Pearson: I saw that BER were looking for volunteers in the RBB Abendschau (regional broadcaster) twitter feed, so I applied for a slot. I'd already done a tour of BER last year; I love doing things like this – always up for a mini-adventure.

GP: We had to do two 'departures' and two 'arrivals'. We were given a fake name for each flight and instructions on what baggage we have to take with us. My first flight was i) luggage trolley, ii) two check-in bags and no hand luggage.
Second flight was just one check-in bag, no hand luggage, but had to go through the process of reclaiming VAT on goods I had in my bag.
So at the start we grabbed our bags from an arrivals carousel, proceeded to the check-in hall and looked at the screen to find our check in desk.

Then we checked in and did all the usual tasks like going to the gate and showing our passport, then we got onto a bus instead of a plane.

Then we were driven around to arrivals, and went through passport control, and then to the carousels to 'collect bags' where we picked bags ready for our next 'departure'.

No special clothes were needed apart from a high-vis waistcoat and an ID badge. Had to follow security protocols as normal i.e. no 100ml+ liquids etc.

TL: What was it like? Were there any highlights/strange things about the day?


GP: They gave us a packed lunch and it was truly the “wurst” sandwich I'd ever had in my life. It was terrible. Lousy coffee and all that.
So apart from the interest or thrill of seeing the new airport, being a test passenger is as boring as being a normal one…waiting around at each stage. But I appreciate that it's important that they do need passengers to check that all the wheels turn, so to say.
What was funny was seeing other passengers who were allocated oversize luggage. The guy in front of me had this massive, massive pole, and we're all chatting in the queue wondering what it was, and it turns out he was meant to be a “Hochspringer” (high jumper).  Some poor woman was wheeling around this massive cello case and all that malarkey.
The airport seems ready but some of the shops need fitting out.

TL: Did you notice anything particularly interesting about the new airport and the building?

The airport certainly looks nice with nice wooden finishes inside, and from the outside it looks elegant, straight from an architect's desk.
But we all know it's short on capacity – the check in hall is the usual grand style, but with so few check-in desks that they've already built an add-on check in desk to the side. You sense that there will be pinch points, but it's only when it opens with the full number of passengers that we'll see. The pandemic offers them a chance to have a true soft opening.
The McDonalds just before the check-in hall is so small that I'm certain my apartment is bigger. It's true that you don't have to walk miles and miles to get to your gate, but on the other hand, there's clearly not a huge offering in terms of shopping and dining.
I think passengers will certainly enjoy the direct rail access to the station underneath the airport, as opposed to the shivering, cold walk to and from Schönefeld S-Bahn.

TL: How does it feel to be one of the first people to try out Berlin's very long-awaited new airport?

TL: Is there anything that could be confusing?
GP: With Schönefeld changing its name to Terminal 5, I think there's going to be immense confusion with passengers arriving/departing at the wrong terminal, and desperately trying to figure out how to get to the “other” terminal, not realising it's another bloody airport on the other side of the runway. Volunteers at BER airport on July 28th. Photo: DPA
TL: Any tips for those of us going in future?

GP: For those arriving by car, I strongly recommend stuffing your face at the Burger King next to the Tankstelle (petrol station) as you pull off the motorway and onto the BER slip road. You'll see it on your right hand side as you drive towards the airport.

Why has the airport taken so long to open?

Berlin's new airport was due to open in 2011 but delays and scandals put it on hold for almost a decade.

Its building costs have reportedly more than tripled from the roughly €2 billion initially budgeted to more than €7 billion to date.

Meanwhile, in 2016, a former manager was jailed for accepting a bribe.

The notorious delays led Berlin's then mayor Klaus Wolverweit to step down in 2015.

The new airport is located in Schönefeld in the state of Brandenburg. October 31st is Reformation Day and a public holiday in this state.

It will replace the capital's old Tegel and Schönefeld airports. Berlin-Brandenburg is also known as Willy Brandt airport after the former West German chancellor.

The 96-year-old died over the weekend, but left the unfinished complex in Mejorada del Campo to a charity run by a priest that has vowed to complete his labour of love.

Gallego began the project in 1961 when he was in his mid-30s on land inherited from his family after a bout of tuberculosis forced him to leave an order of Trappist monks.

Today, the “Cathedral of Justo” features a crypt, two cloisters and 12 towers spread over 4,700 square metres (50,600 square feet), although the central dome still does not have a cover.

He used bricks, wood and other material scavenged from old building sites, as well as through donations that began to arrive once the project became better known.

The building’s pillars are made from stacked oil drums while windows have been cobbled and glued together from shards of coloured glass.

“Recycling is fashionable now, but he used it 60 years ago when nobody talked about it,” said Juan Carlos Arroyo, an engineer and architect with engineering firm Calter.

The charity that is taking over the project, “Messengers of Peace”, hired the firm to assess the structural soundness of the building, which lacks a permit.

“The structure has withstood significant weather events throughout its construction,” Arroyo told AFP, predicting it will only need some “small surgical interventions”.

Renowned British architect Norman Foster visited the site in 2009 — when he came to Spain to collect a prize — telling Gallego that he should be the one getting the award, Arroyo added.

The sturdiness of the project is surprising given that Gallego had no formal training as a builder, and he worked without a blueprint.

In interviews, he repeatedly said that the details for the cathedral were “in his head” and “it all comes from above”.

The complex stands in a street called Avenida Antoni Gaudi, named after the architect behind Barcelona’s iconic Sagrada Familia basilica which has been under construction since 1883.

But unlike the Sagrada Familia, the Cathedral of Justo Gallego as it is known is not recognised by the Roman Catholic Church as a place of worship.

Father Angel Garcia Rodriguez, the maverick priest who heads Messengers of Peace, wants to turn Gallego’s building into an inclusive space for all faiths and one that is used to help the poor.

“There are already too many cathedrals and too many churches, that sometimes lack people,” he said.

“It will not be a typical cathedral, but a social centre where people can come to pray or if they are facing difficulties,” he added.

Father Angel is famous in Spain for running a restaurant offering meals to the homeless and for running a church in central Madrid where pets are welcome and the faithful can confess via iPad.

Inside the Cathedral of Justo, volunteers continued working on the structure while a steady stream of visitors walked around the grounds admiring the building in the nondescript suburb.

“If the means are put in, especially materials and money, to finish it, then it will be a very beautiful place of worship,” said Ramon Calvo, 74, who was visiting the grounds with friends.

FIND OUT MORE: How to get to Justo’s Cathedral and more amazing images

PARTNER CONTENT
Where are you going this summer? Why Malta is the perfect Mediterranean escape
Url copied to clipboard!