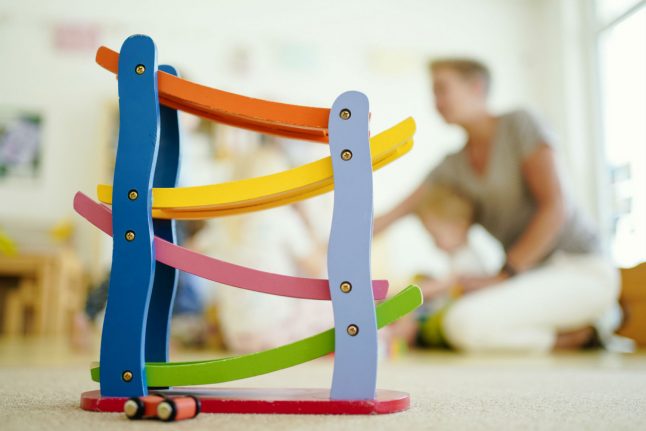 A carer at a Kita in Schriesheim, Baden-Württemberg in June. Photo: DPA

Poor staffing and groups that are too large: Germany’s Bertelsmann Stiftung (Foundation) considers early childhood support to be at risk in many areas, even amid small improvements in recent years.

As a result, many Kindergartens and day nurseries in Germany can only implement their educational aims to a limited extent.

Both their staffing ratio and group sizes are unsuited to children, warned professionals in view of data published by the Bertelsmann Foundation’s ‘Federal State Monitoring of Early Childhood Education Systems’ on Tuesday.

Throughout Germany, almost three in four children attend a Kita or day nursery with too few staff: there were 4.2 day nursery children per Kita teacher, according to figures from the 2019 census.

In Kindergartens, the figure was as large as 8.8 children per teacher.

Experts recommend, however, that there should be a maximum of three nursery, or 7.5 Kindergarten children, per teacher. More than half of all Kita groups nationwide were larger than the recommended size.

Despite the extension of the number of places available at Kitas, as well as investments in additional staff, improvements in quality over the last few years have been minor, said The Bertelsmann Foundation.

That carries consequences for the educational sector

“If a member of staff is responsible for too many children, they are unable to cater to the needs of individuals or consider personal development or family background. Individual support then falls by the wayside,” said Annette Stein, who is responsible for the Department of Early Childhood Education.

There is an urgent need for further – and permanent – investments in quality development. “We must not lose sight of that now in the coronavirus crisis,” said Stein.

The effect of staff shortages is underlined by a study which the foundation published together with the Open University in Hagen to accompany the federal state monitoring data.

In the study, group discussions with a total of 128 Kita employees were analysed. Jutta Schütz, head of the Department for Empirical Educational Research at the university, described the results as “dramatic”.

“Many Kita teachers speak of a balancing act between their own aspirations and a lack of time resources,” said the education researcher.

“Incredibly dedicated specialists encounter a situation in which they are unable to act professionally.” What issues do Kita teachers face in the classroom?

Overworked Kita teachers reported reactions such as raising their voice as a result of stress, or ranting for no real reason.

They also mentioned similar issues for regions and agencies: unfilled positions and too many tasks outside of the classroom – for example, taking on the role of a parent or even as a substitute caretaker.

The size of the groups means that teachers can fulfil little more than a basic duty of supervision. “How can you ensure that you deliver an education when you have to look after 20 children by yourself?,” asked Schütz.

“Often nothing more can be done beyond simply keeping the children safe,” she said.

READ ALSO: These are the best places in Germany to send your kids to kindergarten

“Learning at the Kita is based on a child-centered, dialogue-heavy method of teaching. Children observe and ask questions.”

Managing this, creating a stimulating environment and interacting with them on a personal level – all of this requires time and, of course, adequate staffing,” said psychologist and head of the Children and Childcare Department at the German Youth Institute, Bernhard Kalicki.

The workload is another factor: “The noise level can increase significantly with the size of the group. This causes stress for children and teachers alike, and makes it difficult to work together”.

“The quality of Kitas still depends very much on where you live and is therefore a matter of chance,” said Kalicki.

At the same time, he pointed out that the huge expansion in the last 15 years of available places, especially for younger children, had not come at the expense of staffing levels.

On the contrary: the ratio has become more favourable by way of calculation, and “the quality of a Kita is always measured in multiple dimensions,” said Kalicki.

How stimulating and self-sufficient everyday life is for the children also plays a role. “It doesn't just depend on the staffing ratio, but also on the work of the management or, for example, the question of how the team communicates,” said the psychologist.