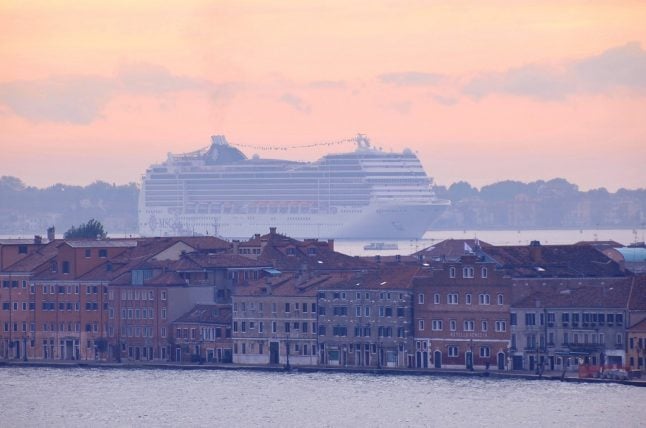 Cruise ships will be able to sail once again from Italy from August 15th. Photo: Andreas Pattaro/AFP

*Note: This article is now out of date and is no longer being updated. For the latest updates click here.*

Approved by the cabinet on Friday night, the decreto agosto or 'August decree' contains both safety rules and stimulus measures designed to support businesses as Italy seeks to recover from its Covid-19 lockdown.

It is the latest in a series of government decrees – formally called a DPCM (Decreto del presidente del consiglio, or 'prime minister's decree') – issued under Italy's coronavirus state of emergency that introduced the sweeping restrictions of the past six months. The last such decree expired on July 31st.

The new decree comes into force on August 10th and applies until September 7th.

The rules on travel, face masks and social distancing are accompanied by a stimulus package worth €25 billion that extends Italy's employee furlough scheme and allows taxpayers to defer payments, among other measures. Italy is seeking funds from the European Union to help cover the cost.

While the decree (available here) stretches to nearly 200 pages, these are the main measures to know about.

As expected, the new decree keeps Italy's rules on face masks in place: everyone must wear them in enclosed public spaces such as shops, restaurants or public transport. The only exceptions are children under 6 or people with a disability that makes it impossible.

Those rules will apply until at least September 7th, when the government will decide whether to extend them again. You're not obliged to wear a face mask on the street in Italy, though many people do. Photo: Valery Hache/AFP

Unfortunately for most people outside Europe, Italy has not eased its travel restrictions in the latest decree and won't do so until September at the very earliest.

That means that only essential travel to Italy – not tourism – is allowed from the United States, India, Russia and most other countries, while even essential travel is restricted from 16 countries on Italy's 'risk list'.

Nationals and residents of the EU, Schengen Zone or United Kingdom can continue to travel freely to Italy. Residents of ten non-EU countries currently on the EU's 'safe list' can visit, but are obliged to quarantine for 14 days on arrival.

For a full explanation of Italy's travel rules, click here.

Italy will allow cruises to resume from August 15th, the new decree says.

But in line with Italy's travel restrictions, they will only be allowed to sail to and from other countries in the EU – excluding Bulgaria and Romania. Ships must certify that none of their passengers have been to any non-EU or Schengen countries in the 14 days before docking in Italy, even briefly.

Nor will passengers calling at an Italian port be allowed to make unsupervised visits ashore: they'll have to take a tour or stay on ship.

Trains and buses won't be travelling full until at least September, after the government ordered operators to continue leaving seats empty to limit contact between passengers.

Some companies had been planning to relax social distancing requirements after the last decree expired at the end of July, but the Health Ministry insisted that passengers should continue to sit at least a metre apart and never face to face.

The government kept the requirement in place for trains, buses and metros in its new decree, despite opposition from some regional governors who have issued ordinances allowing local transport to run at 100 percent capacity. One of the most-discussed policies included in the new decree is the extension of the cassa integrazione (CIG), a policy preventing businesses from laying off employees by covering part of their salary – similar to the furlough schemes implemented in the UK and elsewhere. Some 12.6 million people in Italy are currently enrolled.

Employers will be able to qualify for the scheme for up to 18 more weeks, though companies that have taken a smaller hit to their profits will have to pay a contribution to apply for the full period.

Under measures provided in previous decrees Italian taxpayers have been able to defer tax payments due this year, without penalties or interest.

The new decree allows them to spread out their payments over more than two years, with half to be paid by the end of 2020 and the other half due in up to 24 monthly instalments starting from January 2021.

Hotels, B&Bs, cinemas, theatres and nightclubs will also expected to get extra time to pay the next instalment of their IMU property tax.

The new decree extends emergency income support for Italy's poorest families, who can claim between €400 and €800 a month if they apply by October 15th. The scheme is intended for households with a combined annual income of €15,000 or less.

People who rely on unstable, seasonal work will be able to apply for a one-off payment of €1,000. The scheme differs from previous payouts to the self-employed in that it is designed primarily for people in the sectors worst-hit by the pandemic, notably tourism, hospitality, entertainment and the arts.

In a bid to boost regular employment in the poorer southern regions of Italy, businesses in the south will get 30 percent cut from the cost of pension contributions for all their employees between October 1st and December 31st 2020.

From September 1st, fans are allowed to watch sports in person again – but only for “minor” events. In other words amateur and local competitions are OK, but Italy's Serie A football matches remain off-limits.

There will also be a cap on the number of spectators allowed to attend: 1,000 for outdoor events and 200 indoors. The same cap applies to audiences at concerts and cultural events.

Large trade fairs and salons can restart from September 1st, the new decree says, so long as social distancing and other precautions are enforced. Organizers are allowed to begin preparing immediately.

Doctors and nurses in the national health service will be offered overtime to catch up on check-ups, screenings, surgeries and other appointments that were cancelled at the height of the pandemic.

The new decree allocates an extra €480 million to pay for the extra hours and allows regions to up their health spending.