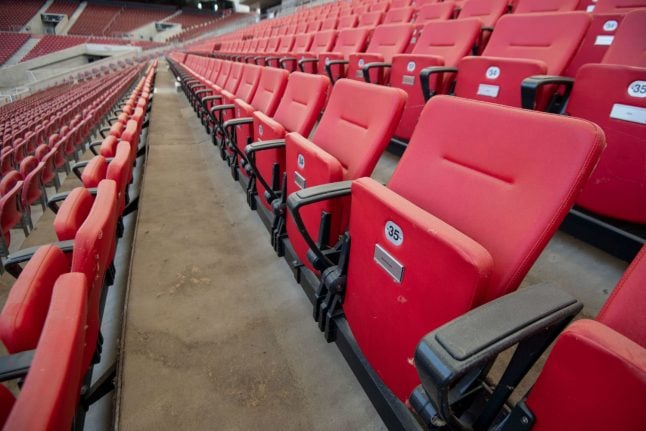 An empty football stadium in Stuttgart on Monday. Photo: DPA

Last week, the 36 clubs in Germany's top two tiers agreed to a four-point proposal by the German Football League (DFL) which could see fans return to stadiums despite the coronavirus pandemic.

Clubs agreed to sell personalised tickets to track spectators, no away fans for the rest of 2020, no alcohol allowed until October and fans seated only, with terraces to remain empty.

The plans, however, must first be approved by the German government.

READ ALSO: Bundesliga: How Germany plans for football fans to return to the stadium in September

“We do not intend to pass a resolution on the DFL's hygiene concept,” Kalayci told newspaper Berliner Morgenpost before the conference.

“Professional football is not at the top of the health ministers' priority list.”

However, the number of the coronavirus are rising slightly in Germany with 436 new cases in the last 24 hours and a total of around 9,000 deaths.

In total, Germany had had a total of 217,322 coronavirus case, and 197,218 reported recoveries, according to the latest data from Johns Hopkins University.

The final nine rounds of league matches last season were all played behind closed doors. A football match in Mönchengladbach, North Rhine-Westphalia on June 16th with the sign “Football without fans is nothing!” Photo: DPA

Frizt Keller, the president of the German FA, has raised the idea of mass testing of spectators next season, but Kalayci torpedoed the idea.

“The idea that, among other things, all fans in stadiums could be tested is viewed critically by the majority of ministers,” Kalayci added.

“Especially because before and after the game, no one can exclude and control large crowds of people and alcohol consumption.

“We currently need the testing capacity in many other areas – for example, schools, daycare centres, nursing homes, hospitals and people returning from travel.”

READ ALSO: 'Don't show up at the stadium': German fans warned ahead of Bundesliga restart

Meanwhile, the Marburger Bund, the association and trade union for doctors in Germany, also warned against a return of fans to the stadiums.

“The danger of a mass infection would be real,” chairperson Susanne Johna told the Neue Osnabruecker Zeitung newspaper.

“If we are unlucky, a 'superspreader' would sit among the fans and the virus will spread like wildfire.

“Someone may not have any symptoms at all yet, but still his throat is already full of the virus.

“And with the shouting and cheering (at a game), it (further infections) can happen in a flash.”

Johna says she has sympathy for the league's attempts to bring spectators back, “but the fact that their concept would prevent infections is unrealistic, in my opinion”.

She doubts fans can be expected to keep their distance during matches, because when a goal is scored, “you hug each other and don't think of corona”.