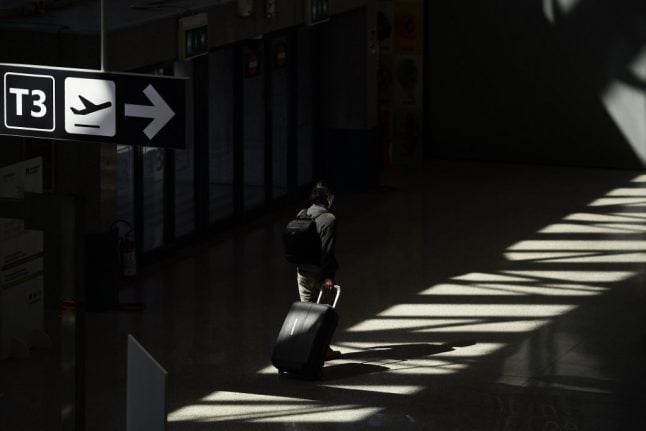 Italy introduced new safety precautions on planes when it allowed European travel to resume in June – but it has changed them a few times since, and besides, how closely are airlines following the rules?

The Local spoke to people who've flown to Italy recently to get an idea of what passengers should expect.

The Italian government asks all passengers flying to Italy to declare that they haven't been in close contact with anyone who has recently had the coronavirus, promise that they'll inform health authorities if they become sick within eight days of flying, and give their contact details in Italy.

Your airline should provide you with a form to fill in before you board, either when you book your ticket, when you check in or at the gate.

If you're flying with Alitalia you can complete it at the same time as checking in online, while British Airways provides passengers with a hard copy at the airport. Ryanair and EasyJet give passengers a PDF and advise them to print it out. You can also find it on the Italy Foreign Ministry's website. Everyone should complete the declaration, regardless of where they're travelling from – even within the EU. The  travellers we spoke to said it was a simple formality: most reported that Italian border agents didn't even glance at their form, while a couple said they weren't asked for it at all.

It's a precautionary measure and you're unlikely to be grilled about it – but if someone should become ill, it could help authorities alert you as soon as possible. So assume you'll need it and give all the details it asks for.

People travelling from outside the EU will have to fill out an extra section to show you're travelling for essential reasons (unless you're a resident of a country on the EU's 'safe list'), as well as informing authorities where you'll quarantine yourself for 14 days after arrival and how you'll get there from the airport.

For more information on travelling to Italy from outside the EU, see here.

Covid testing for some returning holidaymakers

Following a rise in new cases linked to travel abroad, the Italian government has introduced mandatory testing for all travellers returning to Italy from Spain, Greece, Croatia, and Malta.

Health authorities worry in particular that Italians returning from vacations abroad may be bringing home the virus and passing it on when people are crowding outdoors, on beaches, at festivals or parties during the summer.

Travellers arriving at an airport, port or border crossing can choose from a number of options, including rapid tests on the spot, or the presentation of a certificate obtained within the last 72 hours which shows they are Covid-19 free.

Passengers wait to be tested at Fiumicino airport in Rome. Photo: Alberto Pizzoli/AFP

They can also choose to carry out a test within two days of entering Italy, but will have to stay in isolation until the results arrive.

Anyone found to be positive, including asymptomatic cases, must report to the local health authorities.

All travellers are subject to multiple temperature checks throughout their journey. What happens before your flight depends on where you're flying from, but Italian airports have been ordered to install thermal scanners to take the temperature of all passengers arriving or departing.

While passengers told us they didn't remember having their temperature measured on arrival, scanners can take the form of surveillance cameras or even special helmets, like at Rome's Fiumicino airport where staff circulate measuring passengers' temperature as they check in or shop.

So even if you don't notice your temperature being checked, it will be. Social distancing during boarding, but not on board

You'll be told to keep your distance throughout the airport – but once you're on the plane, you could well find yourself elbow to elbow with a stranger.

That's because the Italian government says airlines aren't obliged to seat passengers a metre apart – which effectively halved the number of people who could board each flight – so long as the plane is equipped with a HEPA (High Efficiency Particulate Air) filter.

According to the International Air Transport Association, HEPA filters capture more than 99 percent of airborne microbes and keep fresh air flowing continuously, resulting in all the air in the cabin being replaced entirely every two to three minutes. They've been standard on large commercial aircraft in Italy and throughout Europe for several years.

But that doesn't mean airlines don't have any responsibility to limit contact between travellers, as Italy's aviation authority reminded Ryanair this week.

According to Italy's rules, airlines have an obligation to spread people out as they wait to check in or board, make sure only limited numbers board or disembark at once, and generally limit movement around the plane as much as possible.

“The crew announced the rows to board/de-plane and everyone else was asked to wait/stay seated until their row was called to ensure distancing as best as possible,” said Jenna Chaplin, a student from the US who flew with British Airways to Venice via London this week.

“There wasn't much distancing getting on and off the plane, and the flight was 80 percent full,” reported Ryanair passenger Dominic Stewart, who flew from Riga in Latvia to Bergamo at the end of July.

But in one new precaution passengers had to ask attendants when they needed the toilet to avoid people lining up, he told The Local.

Ryanair insists it follows all the Italian government's rules, and some people told us they'd seen them enforced on their flights. Others, though, said the problem wasn't limited to Ryanair and reported seeing a lack of social distancing when flying with other airlines too. Airlines are supposed to enforce social distancing before you board. Photo: Filippo Monteforte/AFP

While Italy briefly banned the use of overhead lockers on planes, the government scrapped that rule in mid-July.

Now it's up to each airline to decide how much hand luggage you can bring aboard, including trolley suitcases – though jackets, sweaters and other small items must be placed inside a single-use container before being placed overhead.

It's the airline's responsibility to hand out appropriate containers on the aircraft, though one British Airways passenger flying from London to Venice in early August told us that flight attendants simply forbid putting any loose items overhead.

Covering your nose and mouth remains mandatory on all flights to and from Italy, as well as throughout Italian airports.

On flights where passengers are seated less than a metre apart – i.e. almost all of them – it's compulsory to change your face mask every four hours, so pack some spares.

How strictly are airlines enforcing the rules? We heard mixed accounts.

Delighted @Ryanair are being held to account here. My flight last friday had ~50% of people not wearing masks and staff didnt give a shit. I had to ask the group next to us repeatedly to use their masks. https://t.co/jH91xh1ozA via @TheLocalItaly

Flew to Sardegna with @Ryanair in July. Everbody was wearing masks, both staff and passengers. Therefore no complaints…

Family member arrived Tuesday LGW->VCE on EasyJet. She felt safe w/ check in, boarding, flight, & arrival. All passengers & staff wearing masks. Plane about 1/3 full (1 pers per row on each side on her flight). They furnished mask to one mother who'd lost hers.

“There was no one abusing the requirement so I don't know how much enforcement the crew would be willing to do, but it was announced in the airport and on the plane,” said Chaplin of her London-Venice British Airways flight.

“Masks were worn and from what I saw 99 percent of people were compliant of their own accord,” said Jon Freeman, who flew from London to Genoa on Ryanair in early August.

Ultimately you may find that you just have to rely on other passengers to follow the rules: for everyone's sake, make sure that you do. You'll have to wear a face mask in all public transport, shops, restaurants, museums and other public indoor spaces in Italy, so get used to it!

Italy hasn't introduced restrictions on serving in-flight food and drinks, so you should still be able to pick up a snack (and lower your face mask to eat it).

You might find the selection is smaller than usual, however, and some travellers reported that payment was only possible by contactless card.

Meanwhile shops and restaurants at Italian airports have reopened, though some may have reduced their hours.


Rome's Fiumicino Airport shows some of its new safety precautions in this video.

You might be picturing finding the airport deserted, breezing through security and getting the whole row to yourself – and on some routes, especially long-haul, that may be the case.

But most people in Europe have had two months to readjust to international travel and it's peak summer holiday season. Most passengers we spoke to reported that their planes were more than 50 percent full (and even if they aren't, it's not necessarily a given that you'll be assigned a seat away from others).

In other words, don't bank on cutting it fine or being guaranteed your personal space.

But if you're lucky, your return to Italy will be something like Jenna Chaplin's: “Honestly, the staff overall seemed much less stressed than I've ever seen (and this was true for everyone: check-in staff, security line, at the gate, on the plane… Everyone just seemed much nicer overall). Probably one of the smoothest experiences customer service-wise I've ever had,” she told The Local.