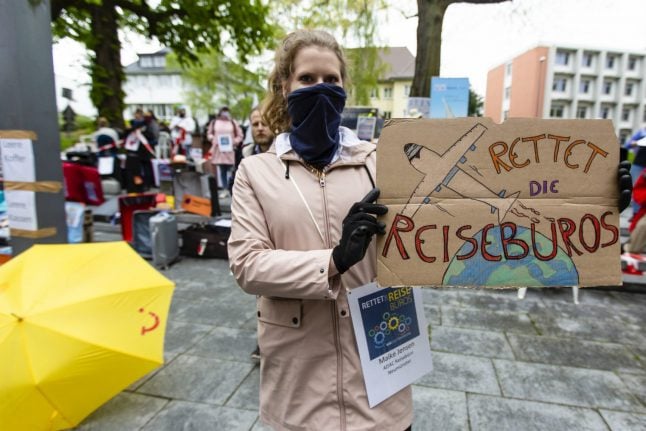 Maike Jensen from the ADAC travel agency in Neumünster holds a sign that says 'Save the travel agencies' during a demo on April 29th in Kiel. Photo: DPA

Businesses or self-employed people in Germany under pressure due to the crisis – particularly in the hard-hit hospitality, tourism and entertainment sectors – can receive “bridging aid” worth €25 billion in total this summer. Crucially, this money does not have to be paid back.

The aim is to prevent a wave of bankruptcies among small and medium-sized businesses whose sales have collapsed due to the shutdown. The bridging aid is available starting retrospectively in June and running through August.

It is particularly aimed at sectors such as the hotel and restaurant industry, clubs and bars, travel agencies, entertainers and professional sports clubs in the lower leagues. Fixed operating costs of up to €150,000 for three months will be reimbursed.

Companies, organisations and self-employed people can apply for bridging assistance for three months.

“Our bridging aid enables companies that have been particularly hard hit by the crisis to get back on track soon,” said Federal Finance Minister Olaf Scholz. “The aid does not have to be paid back. It is particularly important to me that we now also provide support for non-profit organizations.”

The bridging aid is the next phase of financial support that Germany has been providing throughout the crisis.

It's part of the government's huge €130 billion stimulus package to kick-start the economy after the shutdown.

How can people apply?

The allowance can only be applied for by tax consultants, auditors and accountants via a nationwide online portal (which you can access here). The application is processed in federal state offices.

Applications have been accepted since July 10th. The latest possible deadline for an application is August 31st 2020.

The funding is intended to support companies, organisations and self-employed people who are particularly affected by the crisis. In order to be able to apply for bridging aid, the following conditions must be met, among others:

– All companies, organisations and the self-employed, regardless of the number of employees, can apply for bridging assistance if they do not qualify for the Economic Stabilisation Fund (loans aimed at larger companies).

– The support applies across all sectors, however, special consideration is given to those heavily affected sectors during the crisis (such as those mentioned above). A woman wearing a mask outside a shop in Munich in April. Photo: DPA

– The loss of turnover in the month of application is a further prerequisite. Only if the turnover has fallen by at least 40 percent compared to the same month last year can you expect to receive aid.

EXPLAINED: How Germany's new multibillion aid package will affect you

The amount of the grant depends on the loss of turnover. Basically, the greater the sales slump, the more funding is available. Your fixed operating costs also play an important role in calculating the amount. The subsidy amounts are calculated according to the following regulations:

– If there is a drop in sales of at least 40 percent in the application month, up to 40 percent of the fixed costs will be reimbursed.

– If there is at least a 50 percent drop in sales in the application month, up to 50 percent of the fixed costs will be reimbursed.

– If there is a decrease in sales of at least 70 percent in the month of application, up to 80 percent of the fixed costs will be reimbursed.

What can you claim for?

Eligible fixed costs include things like rents and leases, financing costs, other fixed expenses, costs for trainees and property taxes. Personnel expenses for staff who cannot be on the Kurzarbeit (shorter hours) scheme can be claimed at a flat rate of 10 percent of the fixed costs.

Travel agencies can also claim loss of commission for trips cancelled due to coronavirus.

How much can firms get?

– Companies and organisations with up to 10 employees receive a maximum of €15,000.

– Small companies with up to five employees and self-employed people receive a maximum of €9,000.

If the exception is applied, the subsidy amount is calculated as follows:

– In the event of a drop in turnover of between 40 and 70 percent in the funding month, the maximum amount specified will be paid out. In addition, the fixed costs not yet taken into account are reimbursed at 40 percent and added to the maximum amount.

– If sales fall by more than 70 percent in the funding month, the defined maximum amount is paid out. In addition, 60 percent of the fixed costs not yet taken into account are reimbursed and added to the maximum amount.

READ ALSO: 'We thought we'd be closed for a month': How Berlin bars are surviving the coronavirus crisis

A carnival operator with 10 employees and a loss of sales of more than 70 percent in the funding period has fixed costs of €50,000. This person can count on a bridging allowance of €33,750. Since there is a justified exception, the maximum subsidy amount of €15,000 is exceeded.

How much are authorities putting in?

The government and the states are providing a maximum €24.6 billion for the funding programme.

The implementation and payment of the bridging aid is the responsibility of the respective federal state. You can find an overview of the granting authorities in the 16 federal states here.

For more information check out the German government website (information in German).