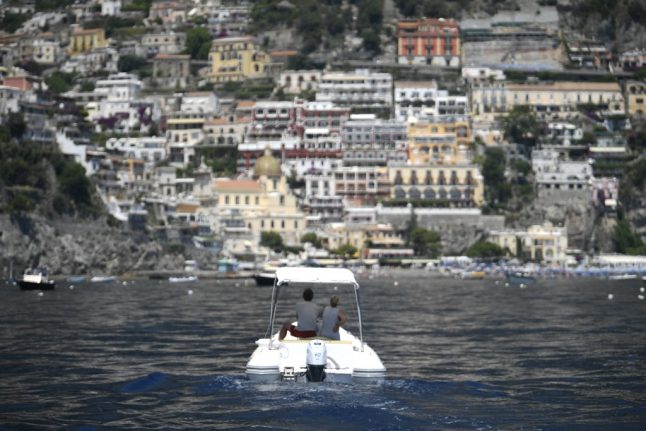 The Amalfi Coast is one of Italy's most popular destinations for American visitors. Photo: Filippo Monteforte/AFP

Even if the rules were changed to allow Americans to return without a quarantine, 61 percent of respondents in Italy told market research firm YouGov that they would oppose tourism resuming from the US.

That makes Americans less welcome in Italy this year than Chinese tourists (57 percent against), Brits (44 percent opposed), or visitors from other European countries.

HAVE YOUR SAY: Should people avoid travel to Italy this summer?

Overall between 61-79 percent of people surveyed in each country opposed allowing American tourists back in this summer, compared to 57-77 percent for tourists from China. Graphic by YouGov based on interviews conducted between June 29-July 5th 2020.

Meanwhile only 17 percent of American respondents said they'd be willing to consider a vacation in Italy this summer, roughly the same percentage that said they'd travel to France, Spain or Germany.

Americans were more open to a trip to Sweden or the UK (both 20 percent), two countries where the infection rate is higher than Italy's.

Just 9 percent of respondents in Italy said they would consider holidaying in the US this summer, and 6 percent for China. The countries that Italians surveyed considered most appealing were Spain (23 percent, despite a higher number of coronavirus cases than Italy), Finland (22 percent) and Norway (20 percent).

But most people in Italy won't be going anywhere this year: just one in two respondents said they had holiday plans in 2020, according to one recent survey by Italian public opinion research institute Demoskopika, and more than 90 percent said they'd be staying in Italy.

Nearly a quarter said they were afraid to travel, while around 15 percent said they couldn't afford it.

Italy's economy is expected to be hit hardest in Europe by its long Covid-19 shutdown and ongoing travel restrictions that continue to impact its crucial tourism industry, with the EU forecasting this week that tourism would be one of the slowest sectors to recover.

Around 60 percent of Italy's hotels and restaurants are in danger of going out of business within a year, national statistics office Istat warns, risking some 800,000 jobs.

While Italy has been open to tourists from the EU, Schengen Zone and UK since early June, many flight routes have yet to resume, many hotels still haven't reopened, and most countries outside Europe – including the US and China – currently have travel bans in place.

Some 5.6 billion Americans visited Italy in 2019, making them the second-biggest group behind Germans (12.1 million). Visitors from the US account for an estimated €2.8 billion of Italy's €42 billion annual revenues from tourism, with July typically the most popular time to come.

For its survey YouGov interviewed around 1,000 people in Italy between June 29th-July 5th, as well as equivalent samples in nine other countries.

We want to know what you think: should Italy welcome tourists back this summer, or is it wiser to for everyone to stay home? Let us know by filling in this survey and we'll write an article about our readers' views.

The 34-year-old man drove onto the bridge in the early afternoon of Thursday, January 26th, but was quickly stopped by police.

He reportedly told officers that he was looking for parking and wasn’t aware he was on the Ponte Vecchio, one of Florence’s most recognisable landmarks.

Completed in 1345, the bridge today is famously a narrow, cobbled walkway lined with small shops selling jewellery and souvenirs.

The visitor, from California, had been planning on touring Florence by car (a rented Fiat Panda, to be exact).

But whether he was trying to put one over local police or he just wasn’t aware of local traffic rules, his early-afternoon ride cost him dearly as he later received a total 500-euro fine for entering a pedestrian-only area and driving without an international driving permit.

Florence recently announced a restoration project worth €2 million for the bridge – which was the only one in the city left standing after World War II.

Thursday’s incident was not the first time a tourist was caught driving across the Ponte Vecchio.

In 2019, a 79-year-old German tourist drove onto the bridge in a rented Lamborghini sports car. After being stopped by local police, the man reportedly told officers he was “lost”.