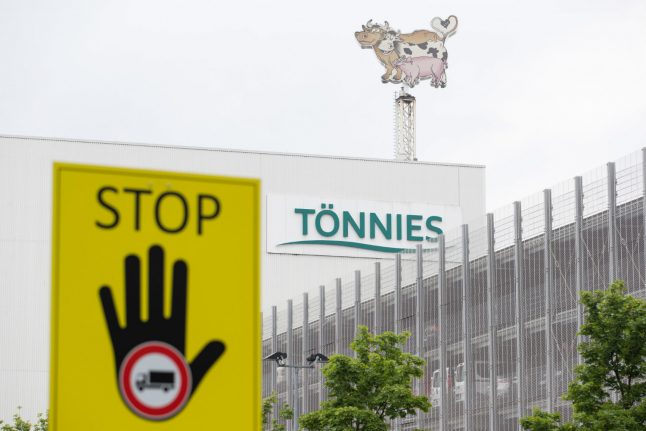 “For the first time in Germany, we will return an entire district to the measures that applied several weeks ago,” Armin Laschet, state premier of North Rhine-Westphalia, said.

The new measures are being imposed on the entire district of Gütersloh, in North-Rhine-Westphalia. They will affect the 360,000 people living there and will be in place until at least June 30th.

More than 1,500 workers out of a total of nearly 7,000 have tested positive for Covid-19 at the slaughterhouse in Rheda-Wiedenbrück run by Tönnies.

All workers are currently in quarantine. However, authorities are now turning to tougher rules to try and control the spread of coronavirus.

“It is a preventative measure,” Laschet added.

The new lockdown means a return to measures first introduced in March, with cinemas, museums, concert halls, bars, gyms, swimming pools and saunas shut down, Laschet said. However, restaurants can remain open with rules in place.

Schools and Kitas were already closed last week in a bid to control the virus.

The outbreak in Germany's most populous state is the biggest since the country began lifting the lockdown in early May.

Several outbreaks at slaughterhouses, not just in Germany but also in France, have put a spotlight on the working and housing conditions facing the workers — many of whom come from Romania or Bulgaria.

But Germany has also seen new coronavirus clusters in residential buildings in Lower Saxony and Berlin, where 370 families living in high-rise flats were placed under quarantine in one neighbourhood last week.

READ ALSO: Germany's coronavirus number rockets above 2. What does that mean?

The localised outbreaks have caused Germany's reproduction number, which shows how many people with coronavirus go on to infect others, to shoot up.

As of June 22nd, the Robert Koch Institute reported the R number to be 2.76, which means a person with coronaviurs goes on to infect more than two other people. Authorities have said the number should be below 1 to control the spread.

Experts say the number of overall cases in Germany remains at a manageable level. However, the situation is being monitored and measures, such as quarantine orders and lockdowns, will be imposed when needed.

Overall the RKI reported 190,350 confirmed coronavirus infections since the pandemic began (as of June 22nd – the latest figures available), an increase of about 530 from the day before.

At the peak of the pandemic Germany was recording more than 6,000 new cases a day. Around 8,800 people have died in Germany.

With new infection rates sharply down from highs in March and a death toll significantly lower than those of its neighbours, Germany became the first major EU country to begin easing virus restrictions about seven weeks ago.

But Chancellor Angela Merkel has repeatedly warned against complacency before a viable vaccine is found.