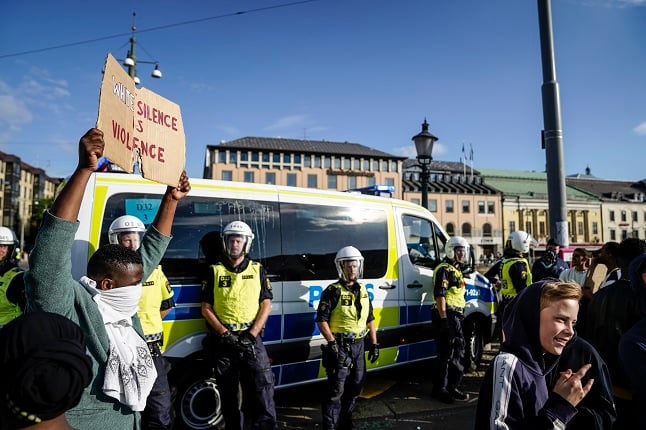 “The general self-image of Sweden tends to be something like this: Sweden played no role to speak of in the history of European colonialism and imperialism, Sweden has never had any pervasive issues with structural racism and to the contrary, Sweden has been a country that’s pro-human rights, open, tolerant, with generous foreign aid policies and so forth,” says McEachrane, a researcher at the Raoul Wallenberg Institute of Human Rights and Humanitarian Law, who has written extensively on race in northern Europe.

Sweden may not have the same problems with police brutality as the US, which kick-started the current wave of Black Lives Matter protests around the world.

But while the expression of the problem may be different, protesters and rights campaigners in Sweden say that the same structures are at play here too.

This has been a central theme in the Black Lives Matter protests in Sweden and in other countries outside the US. While the latest wave of protests was prompted by the killing of black American George Floyd in police custody, organisers have also highlighted systemic racism in their own countries, including Sweden.

“That has not been discussed so widely in the Swedish press — the tendency is to not have conversations about racism in Sweden, as if racism in Sweden, to the extent it does exist, is a highly marginal phenomena, or has been left behind in the past,” explains McEachrane.

“You cannot compare the criminal justice systems in the US and Sweden; the US has a far larger prison population per capita, Swedish prisons are more humane and put a greater emphasis on opportunities for rehabilitation. But studies on policing in Sweden clearly show that racial profiling is an issue in Sweden too, and there have been incidents of police violence that seem to have been racially motivated,” explains McEachrane.

“It’s also true that if you look at any major area of Swedish society, be it employment, housing, education, healthcare, you will find that so-called people of colour with a non-European background tend not to have the same access to rights and resources,” he says.

“There are very similar patterns in housing segregation. Sweden is a society that’s racially segregated with extensive discrimination.”

One area where this is clear is in the Swedish police list of 'especially vulnerable areas'. Defined by police as areas with a low socioeconomic profile and higher criminality, these areas are typically home to many more people of a non-white, non-European background than more affluent areas.

Another characteristic of these areas is a lower level of trust in the police and other authorities.

McEachrane criticises Swedish media for largely glossing over these patterns and instead describing the global protests as not being relevant to Swedish society and the protests in Sweden as merely a show of solidarity for those suffering injustice elsewhere.

Another problem with the discussion of the protests is a narrow fixation on symbols.

Some of the protesters and rights campaigners have called to remove or alter statues of people who played a key role in producing racist structures.

In Norrtälje, locals have complained to the council about a statue of Dutch merchant and slave trader Louis de Geer, while a petition, started by activist Lovette Jallow, calling for the removal of a Stockholm statue of biologist Carl Linnaeus gathered 2,000 signatures.

Biologist Carl Linnaeus' taxonomies for flora and fauna formed the basis for the modern system of naming organisms. He also pioneered human race-biology and sought to classify people, speaking of 'white, yellow, red, and black people', and describing each 'type' as having distinct physical and mental characteristics — white people were 'law-abiding' while he said black people were 'shameless' and 'cunning'. One of many statues to Carl Linnaeus around Sweden. Photo: By Mr.Dr, CC BY-SA 3.0

The outcry over calls to rethink statues of Linnaeus points to two views of Swedish history and national community, McEachrane argues.

“One is a nationalistic view where Linnaeus is a national icon and should be honoured. The other is that he was also a pioneer of race biology, and this is highly relevant to people of colour in Sweden. The one-sided glorification of him in statues and education too does not include everyone in Sweden on equal terms,” he explains.

As is the case elsewhere, the debate in Sweden is not simply about statues, nor only things that happened long ago or far away. The statues aren't just relics but are symbols of this long-standing one-sided view. Instead, it is about how to recognize history, its impact on the present and the sort of society we envision.

“We need broader conversations about Sweden's national narratives, history and its impact on the present, including figures like Linnaeus. We need to be careful when we turn him into a national icon. We must be clear that yes, he made positive contributions to the development of biology, but he also made contributions to modern race thinking that have had a devastating effect,” says McEachrane.

The same goes for discussing Sweden's role in colonialism. Sweden was a relatively minor player in the transatlantic slave trade and only had one long-term colony outside Europe, Saint Barthélemy, but Sweden was by no means a bystander, and benefited from the global economy established by European imperialism.

Enslaved people of African descent worked on Sweden's colony, under the same conditions as in other colonies, and subjected to the same racism. Sweden too cultivated an identity of being superior as white Europeans at this time. The country benefited financially from the transatlantic slave trade as its booming iron industry was used to make chains and shackles among other things. Enslaved Africans were transported on Swedish ships and travelled through Saint Barthélemy's popular free port, and Sweden only outlawed slavery in 1847, 14 years after the UK had abolished it.

“You’ll find the same patterns of racial discrimination in other European countries and former European ‘settler colonial states’ like the US, Canada, Australia, New Zealand. The expression isn't exactly the same, but the patterns are consistent, and it’s not by accident.”