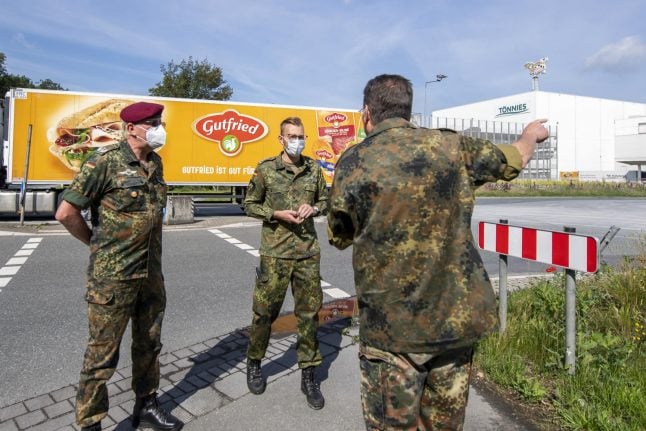 Members of the Bundeswehr (German Army) outside Tönnies. Photo: DPA

The coronavirus pandemic is putting societal problems like unsuitable housing and working conditions in the spotlight.

And in Germany, a massive outbreak at the Tönnies meat processing plant in the Gütersloh district, close to Bielefeld, is creating waves at both state and federal levels, as authorities try to keep the infections under control.

As of Monday more than 1,300 meat plant workers were confirmed to have contracted coronavirus and the 6,500 employees and their families have been ordered into into quarantine.

All schools and daycare centres (Kitas) in the district are now closed until after the summer holidays.

Virologists, contact tracing teams and the German army (Bundeswehr) have all been drafted in to help contain the outbreak.

On Monday June 22nd German Chancellor Angela Merkel’s spokesman said “everything needs to be done” to contain the outbreak.

Steffen Seibert said 20 workers at the meat plant were in hospital, with several in intensive care.

“We very much hope that all those who have fallen ill survive,” Seibert told reporters in Berlin on Monday. “This is an outbreak that needs to be taken very seriously.”

READ ALSO: Germany's coronavirus number rockets above 2. What does that mean?

Will there be a lockdown?

North Rhine-Westphalia (NRW) state premier Armin Laschet said there was a possibility of a full district lockdown – a shutdown of public life similar to what happened at the height of the Covid-19 epidemic in March.

At the weekend Laschet, who is hoping to succeed Merkel as when she steps down as Chancellor, said the outbreak at the slaughterhouse was “the biggest yet in North Rhine Westphalia”.

The western state has been one of the hardest hit by the coronavirus with around 1,600 deaths recorded there. Germany in total has recorded around 8,800 deaths.

“We have closed the schools and daycare centres, this is the first part of a lockdown,” he told broadcaster ZDF on Sunday night.

“And we will consider further steps in the next few days. I can imagine that we will also reinstate contact restrictions as they were part of the lockdown.”

Laschet said on Sunday that the infection was still contained at Tönnies and that there was no “significant leap” of the virus to the general population.

On ZDF he said the enforced quarantine of around 7,000 people was an “ambitious goal in itself” because everyone had to be provided with food and there have been language difficulties.

Many of the workers at the processing plant come from eastern Europe and have short-term contracts. Accounts from workers suggest that many of them have to share small rooms with two or three other people while working long shifts on minimum wage.

In the coming days, there will be a report from experts who are following the chains of infection. “And I cannot rule out this lockdown,” said Laschet, who came under fire in recent days for his comments appearing to blame the workers for bringing the virus to Germany.

“It just has to be targeted, it has to be justified, and it has to achieve the goal of keeping the infection from spreading any further into the population,” he said.

Who is to blame for the outbreak?

Federal Labour Minister Hubertus Heil told an online broadcast for German newspaper Bild that Tönnies should be held accountable for this outbreak.

“There must be a civil liability of the company,” Heil said, adding that the company had “taken an entire region hostage” by violating the coronavirus rules.

Heil said that his trust in the Tönnies company was “equal to zero”, and that the company not only endangered its own employees, but also “public health.”

On Saturday, Tönnies boss Clemens Tönnies publicly apologised for the outbreak. He said that the firm was “fully responsible”.

Germany has vowed to reform meat industry practices after a series of similar outbreaks.

Among the measures planned is a ban on short-term contracts in a bid to give workers' more rights. This will apply from January 1st 2021.

On Sunday, Social Democrats co-leader Norbert Walter-Borjans called for higher meat prices and a debate on how food is produced.

The Tönnies case shows “how little attention is paid to the question of how food – after all, our most important basis of life – is produced”, said Walter-Borjans.

He added that it was the task of politicians to ensure good working conditions as well as animal welfare.