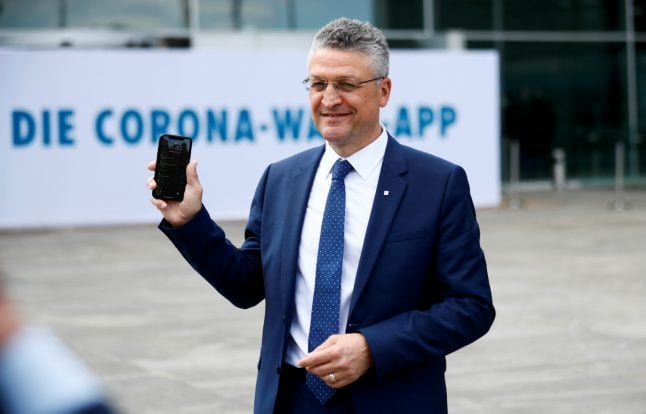 Authorities are hopeful that people will download and use the free app – the first of its kind in the country aimed at stamping out coronavirus infection chains.

“Downloading and using it is a small step for each of us, but a big step in the fight against the pandemic,” said Chancellor Angela Merkel's chief of staff Helge Braun, at the launch of the new app in Berlin.

He said it was not the first coronavirus app to launch in the world, but it was the best. He added that citizens could rely on high standards of data protection and security.

Federal Health Minister Jens Spahn said the app was an “important additional tool” to deal with the coronavirus crisis. He said the aim now was to prevent a possible second wave of the pandemic.

“Especially in a phase when there is much more contact again,” he said. “When the holiday season is beginning it is important to trace infection chains much more easily and quickly.”

This is also important as there are an increasing number of demonstrations as well as journeys by bus and train, where more “anonymous proximity” to other people is happening, he said.

'Rock star made in Germany'

The app, which works through bluetooth, is designed to make it easier to track infections.

If a user has tested positive and has shared this in the app, it reports to other users that they have spent time near an infected person. Then that person can be tested – even without symptoms, and at the expense of health insurance companies. The test centres are involved in the process. Using the app could save up to four days of time compared to the analogue methods for tracing infection chains, although this will also continue alongside the app.

“We can also identify additional encounters that have so far fallen through the grid,” said Lothar Wieler, head of the Robert Koch Institute (RKI).

Contact details are not stored centrally – only on smartphones. The app was developed by Deutsche Telekom and the software company SAP at a cost of €20 million.

When presenting the app, Wieler mentioned four factors that are used to calculate when a user receives a warning. These include the duration and proximity of encounters, the time since the encounter, the bluetooth signal and the transmission risk.

Timotheus Höttgens, Telekom boss, called the creation a “rock star made in Germany”, which goes “far beyond the capabilities of an app”.

During development, everyday situations such as train rides, school lessons and cocktail parties were all simulated.

According to the German government, the prediction accuracy is around 80 percent. In the coming weeks, the technology is to be developed further, and it will soon be connected to all health authorities.