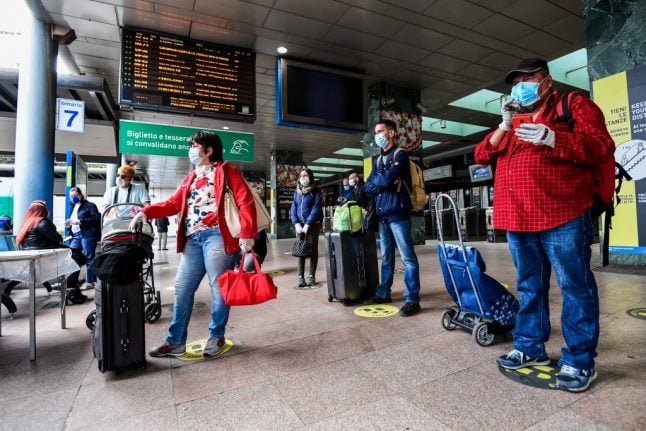 The final confirmation came late on Friday after ministers reviewed the most recent regional health monitoring data in a weekly report produced by the Ministry of Health with the Higher Health Institute.

“The current law decree provides for interregional movements from June 3rd,” health minister Roberto Speranza stated following the decision. “At the moment there are no reasons to review the planned reopening.”

As well as some international travel, unrestricted movement will be allowed in and out of all regions, including Lombardy, which remains by far the hardest-hit region in the country.

READ ALSO: Who is allowed to travel to Italy from June 3rd?

However, some southern regions with relatively few cases are now considering bringing in their own local restrictions on people arriving from the north.

The official Health Ministry report, based on regional data following the last round of reopenings on May 18th, urged caution in restarting regional travel.
It said that the current situation “is positive, on the whole, with respect to the first phase of transition” although “signs of transmission persist, with new hotspots that depict a fluid epidemiological situation in many regions.” “The problem of Lombardy remains, the caution of scientists too,” it continued. “But postponing the reopening for a week would have triggered unsustainable tensions and forced the government to keep foreign borders closed.”

Italy had already confirmed that some international travel would be allowed from June 3, and Il Corriere added that postpoing regional travel at this point could result in “unequal treatment between Italians and foreigners.”

Ministers had previously suggested that they may not allow travel from regions deemed to be “high risk”, and threatened that regional travel would not be allowed if large gatherings continued, amid concerns about partying after bars reopened on May 18th.

On Thursday, a report from Gimbe, Italy's group for evidence-based medicine, warned that it would be “risky” to reopen travel to and from three northern regions – Lombardy, Liguria, and Piedmont, which it said are still seeing a high number of cases.

Italian medical experts have also cast doubt on the accuracy of health data being reported by some regions, particularly Lombardy, with the head of Gimbe, Dr. Nino Cartabellotta, saying “there is a reasonable suspicion that the regions are using tricks so they don't have to close again.”

In an interview with The Local last week, Cartabellotta said the government was pushing ahead with relaxing measures without having had enough time to see the effects of the last round of reopenings, from May 18th, on the contagion curve.

According to the official figures, more than 33,000 people have now died of the virus in Italy – around 16,000 of them in the Lombardy region alone.

There were 516 new cases recorded on Friday and 87 deaths, 38 of which were recorded in Lombardy.