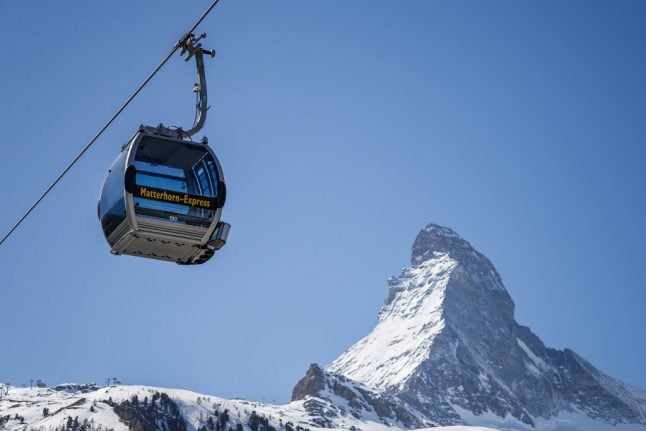 The Matterhorn is one of the most recognisable mountains in the world. Photo: Valentin Flauraud/AFP

As Switzerland is a small country – 220 kilometres from north to south and 350 kilometres at its widest extent from west to east – you don't have to travel far to visit one or more of these places.

Even if some of the infrastructure is not fully operational yet, all these places are beautiful and interesting enough to merit an excursion, even if only to walk around, admire the surroundings, and soak up local culture and traditions, which are often different from one linguistic region to another.

Switzerland's Italian-speaking canton was one of the most impacted by the Covid-19 pandemic, but is now slowly re-opening for business and tourism.

There is plenty to see, including beautiful lakes Maggiore and Lugano, and quaint old towns and villages like Ascona, Cabbio (Muggio Valley), Morcote, Carona, or the riverside hamlet of Lavertezzo, which is made entirely of stone.

And while there, you can taste typical Ticinese dishes like risotto and polenta in a local “grotto” – simple taverns located in quiet hideaway places.

This iconic alpine village in the canton of Valais is not just pretty in its own right – lined, as it is, with many wooden chalets – but it also lies at the foot of the mighty, 4,400-metre-high Matterhorn.

The area is busiest during the ski season, so now may be a good time to visit if you want to avoid the crowds and explore the area while it is calm and serene.

Whether you take to the hiking trails or more leisurely walks, you will have a spectacular view of the Matterhorn, which has probably the most recognised peak in the world.

Before going, check to see what is open and when.

This region in the canton of Fribourg is where the world-famous Swiss cheese is manufactured.

The factory is opened since May 11th and it offers an interesting and informative tour of the production facilities, conducted by a multi-lingual cow named Cherry (yes, really!). Plus, you get free cheese samples.

But the highlight of the region is the quaint, hilltop medieval village. While there, you can walk up the cobblestone square to the 13th-century castle and afterwards sample the traditional cheese dishes, as well as the dessert of raspberries topped by locally-produced meringue and clotted cream.

The roar and thunder of the 120-metre-high and 40-metre-wide waterfall in the Bernese Oberland is an impressive sight, but you might want to visit it for another reason too: it is where Sir Arthur Conan Doyle ‘killed' Sherlock Holmes in the battle between the legendary detective and his enemy, Professor Moriarty.

You can get to the scene of the fictional murder on a 24-seat wooden cableway carriage, once used to generate electricity. But first call 033 982 26 26 to make sure the train is already in service.

Or you can hike up the hill to the top, and see from where Holmes tumbled to his death…

Switzerland's largest contiguous winegrowing region, the terraced vineyards between Lausanne and Montreux in the canton of Vaud dip into Lake Geneva.

The views from the vineyards are stunning. You can see not only the French Alps on the other side of the lake, but also small, picture-perfect villages like St. Saphorin, Epesses, and Chexbres, where vintners have been growing and producing wine for generations.

You can drive (or, better yet, walk) along the Route des Vignobles (Vineyard Route), sampling wine along the way, while admiring the views over the lake and the mountains.